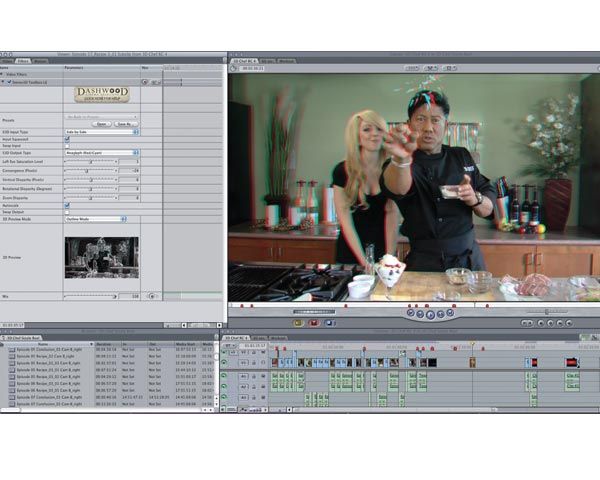 Unless you’ve been avoiding the movie theater for the last couple years, you’ve likely seen a 3D movie, possibly with explosions and car chases, bursting from the screen. Perhaps as you left, you held onto your 3D glasses thinking: “I wonder if I can make my own 3D videos.”

Yes you can. You’ll need two cameras or a special adapter to record 3D images. Once you have the footage, you’ll have a new problem: crafting a stereoscopic video. Bring in Stereo3D Toolbox LE and a lot of the hassle of doing that is gone. And depending on how you eventually show your 3D video, those theater glasses might come in handy after all!

Upgrade to the Third Dimension

It’s compatible with Final Cut Pro, Adobe After Effects, Motion and even Final Cut Express. FxFactory is a plug-in manager that is free to download and install and includes plenty of demo plug-ins. Once installed, the plug-ins will appear in the “effects” tab in Final Cut Pro. If you’d rather not see particular filters, you can unselect them in FxFactory to tidy things up.

Mixing it Up in 3D

The Stereo 3D Toolbox LE mixes two separate footage tracks into a single 3D video. Footage has to either be separate clips from separate viewpoints or side-by-side, which is a common 3D format. It doesn’t handle footage acquired “natively” or “baked” formats. Just as you can’t remix the ingredients of a baked cake, it doesn’t remix video already in one flattened 3D signal. You must start with separate ingredients.

Initially, some of the plug-in terminology is confusing to those not acquainted with 3D jargon. However, there’s a big “click here for help” button in the settings panel that opens a webpage, which details what the buttons and sliders do. It uses some big words, but still explains details in a user-friendly way.

When you have suitable 3D footage, place it in the editing timeline, go to your “effects” tab and apply the Dashwood Stereo 3D Toolbox LE filter. Then input what kind of format the footage is, either by adding the second track or setting the filter to work with side-by-side footage. The filter mixes them together and creates the 3D footage.

A Little More to the Left 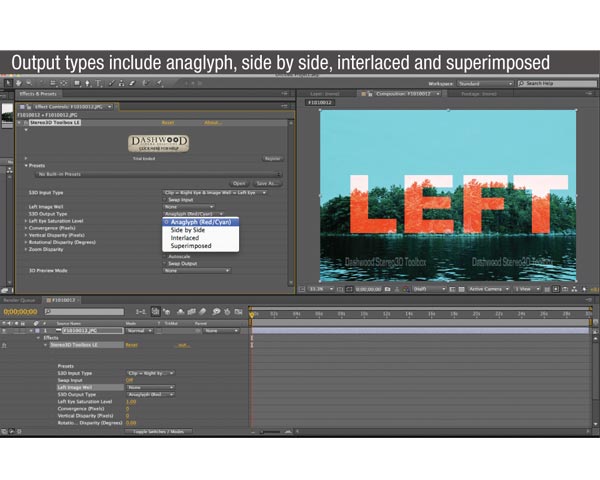 Presto, your footage is 3D! But what if it’s misaligned? If the camera position, rotation or zoom was off on set, does that mean a re-shoot? Not always. Three filter controls can fine tune the vertical, rotational and zoom disparity of the images. The vertical disparity moves the images vertically to align properly. If one of the video cameras was unintentionally too high, this will help bring the footage together. Same for the other two controls, except they change the rotation and zoom respectively. Shooting with two cameras is tough enough and this takes the edge off getting everything absolutely perfect on set.

There’s also a convergence adjustment. Essentially, this controls how far forward or back objects appear in 3D. Further down, an option for “autoscale” clips off the outside sections of the footage where only one of the two video layers exists. Without this adjustment, there would be leftover, non-3D footage, on the side of the screen. By turning autoscale on, the video scales up and the unused portions are not a problem.

So, you’ve tweaked the footage to perfection, now it’s time to pick a format. Depending on your equipment, you have some choices here. Stereo3D Toolbox LE has several 3D modes to choose from. You can go retro with red/cyan anaglyph, or you can stay modern with either interlaced 3D, for use with Passive Polarized 3D monitoring systems, or side-by-side 3D, a common standard of 3D formats. While anaglyph might not be cutting edge, it’s viewable on any television and the Internet with the proper 3D glasses. The latter options cater to more recent 3D display technology.

Looking at the Big 3D Picture

Stereo 3D Toolbox LE is a powerful tool, valuable for intermediate and advanced video enthusiasts. Professionals might want to check out the full Stereo3D Toolbox as it provides much more control, however it comes with a bigger price tag. The lite edition is great for those starting to explore the possibilities of 3D video. It provides a way to mix 3D footage in a format compatible with 3D viewing equipment. For the price, it’s not only a bargain; it’s almost a steal.

If you’re interested in creating 3D video, this plug-in provides a great way to mix your footage together for a reasonable price.