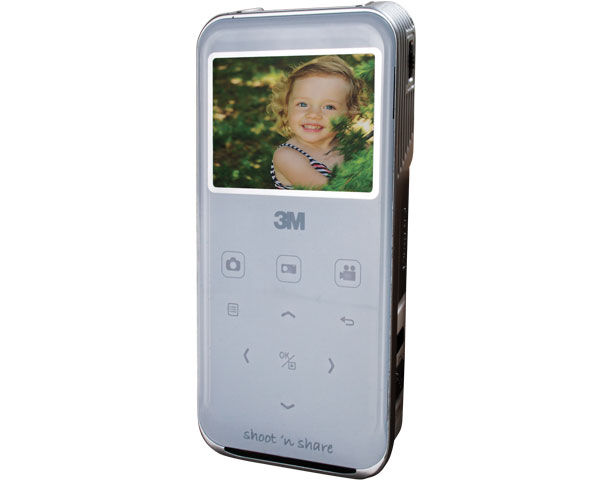 Whether you want to make a video presentation to your client, shoot the family gathering with an immediate playback on the nearest wall, or just show off the latest cool toy, then the new Shoot ‘n Share CP40 camcorder projector from 3M will undoubtedly be of interest to you. 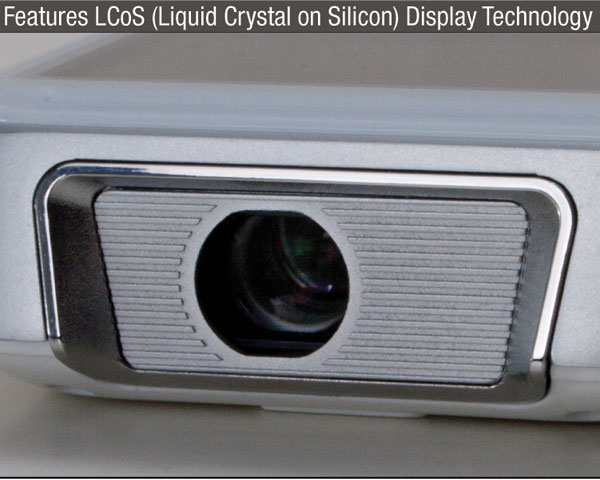 Though the Shoot ‘n Share is somewhat larger than the average pocket video camera on the market today, it is still compact enough to easily fit in one’s pocket. The device’s main panel consists of a 2.4-inch LCD display situated above the touch activated control pad. The panel contains buttons for capturing still images, video and, you got it, projection mode. There is also a menu button, a back button and an OK/Play button for making menu selections, playing video and displaying still images. Four arrow buttons allow for navigating the menus and controlling the volume or zoom depending on the currently active mode.

The panel on the left side of the device has an AV – Headphone port. Plugging in a cable brings up a menu allowing you to select which function you want to enable. “AV in” lets you connect and project various mobile devices, DVD players and gaming consoles. Also on the left side, under a seemingly fragile port cover are the USB and HDMI ports. The USB port allows for charging the internal battery via either the A/C power adapter or direct connection to your computer via USB. When connected file transfer is simple; just drag and drop. In addition to its projection capabilities the Shoot ‘n Share offers an HDMI port so you can output your footage to an HDTV.

The right side panel is where you’ll find the power On/Off button, the projector’s focus wheel and, beneath another questionably sturdy port cover, the microSD card slot. While the internal memory is rather anemic at only 14MB the card slot provides you the means to add up to 32GB of storage. Memory cards also make it very easy to bring external media files into the device for later projection before your intended audience. ArcSoft Media Converter is included and can convert most video files, even PowerPoint slides, to a format capable of being played on the projector.

The forward panel contains the projection lens housed in a protected recess. Still, an actual cover of some sort would provide added insurance; perhaps an automatic cover that snaps open when the projection mode is engaged. On the underside we find the camera lens and video light, the built-in microphone and speaker and a standard tripod mount. You’ll want to be careful with this as the screw threads directly into the plastic. While using a tripod is great for projecting your images it’s useless for recording. When the Shoot ‘n Share is mounted on the tripod the camera lens is pointed directly at the floor! A second tripod mounting location on the bottom end panel would solve this problem. As it is, you can’t even stand the unit on its end because of its slanted design.

Captured video is good, not great. Resolution is 720p at 30fps. Pocket-sized camcorders abound today that can capture 1080p HD video at a lower cost – although without the Shoot ‘n Share’s projection capabilities. Rapid panning is definitely a no-no as vertical lines tend to whip around like a sapling in a hurricane. However, test footage shot at a family get-together using proper hand held techniques with slow controlled pans yielded very pleasing results. Immediately switching to projection mode and showing the just-captured footage on the nearest wall elicited numerous oooohs and ahhhhs from those present.

Projection quality isn’t bad and images can be projected up to 65″ diagonally from 6.8 feet away. Focus is achieved via the focus wheel located to the right of the projection lens. The audio leaves much to be desired however, as audio capture isn’t that great to begin with (typical with built-in mics) and the internal speaker isn’t very loud.

As with many hybridized technologies the Shoot ‘n Share is neither a truly great HD video camera nor a truly great projector. What it does do, however, is pretty darn cool and unless you want it for high-end professional business use you’ll probably find yourself liking it just the same. With a few design changes and amped up video quality this could truly become a real must-have piece of technology. We can’t wait to see what 3M’s next iteration of the Shoot ‘n Share has to offer.

If you want truly great HD video, look elsewhere; but if average video capture, built-in projection capabilities and massive coolness appeal to you then check out the Shoot ‘n Share CP40.