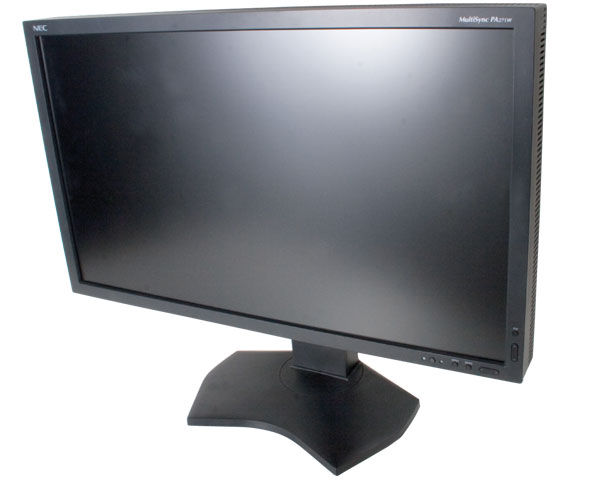 There is no bigger horror in the world than a video editor finding out that his bright, colorful Oscar-worthy masterpiece ended up looking drab and overexposed on the big screen. As regrettable as that scenario can be, the most regrettable fact is when editors choose to overlook the importance of color accuracy in the first place. To be sure, there are a bevy of monitors on the market today that can display close to perfectly accurate color, but as someone wisely said: close only counts in horseshoes and hand grenades. Instead, with something as important as a feature film, commercial, or family archives, getting color correct the first time can really help an audience relive a moment in the way it was intended. This is where the newest offering from display maker NEC really shines. The color reproduction and calibration options for the NEC monitor beats most monitors currently on the market, allowing editors to breathe a sigh of relief knowing that their projects will be seen with the bright and colorful design that they wanted the world to see.

Color accuracy is one great part about a monitor but to be seriously considered, intuitive design is also a must. In this realm, the NEC PA271W does a superb job. The monitor comes with a stand that allows one to raise it to 6.5 inches above the desktop or .75 inches at its lowest setting. The stand can also swivel 45-degrees to the left or right and can pivot 90-degrees to the right into a “portrait” mode for those editing photos or connecting multiple displays. If the monitor is set low, the panel can also tilt back 30-degrees for better viewing making this monitor extremely versatile.

Besides the stand, one of the first things we noticed when unpacking this monitor was its monstrous size. One almost feels guilty having something this large on a desk as it literally dwarfs everything around it. The NEC PA271W is 25.2 inches wide by 14.9 inches tall making it a force to be reckoned with. So keep in mind, it’s a good idea to make sure there is plenty of desk space available for this monitor before purchasing, as its almost as wide as two monitors put together. As one can imagine with a lot of size comes a lot of weight and this monitor weighing in at 30 pounds was no exception. The monitor also comes with a handle on the top of the monitor allowing one to either easily transport the monitor or to train for the 2012 Olympic weightlifting gold, whatever the preference might be. All kidding aside, this is one monitor that users should not plan to move often. 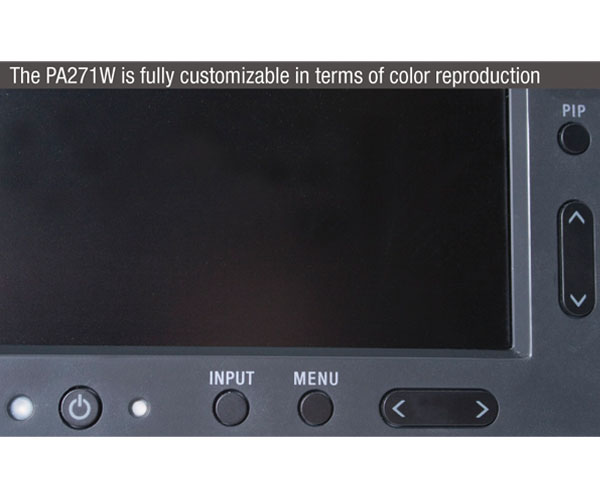 Of course with all the features NEC has packed into this monitor, it’s easy to see why it is so large. The monitor has a number of inputs including the ever-popular and high quality DisplayPort, two DVI ports, S-Video, plus a USB hub with 2 downlink and 2 uplink ports. Additionally, on the front of the monitor there are a number of buttons along the right lower edge such as Menu, Input (which uses the built in KVM switch if used), PIP, Right and Left, Up and Down (for menu selection). However, the most glaring omission of the entire design is an HDMI port. While this is a popular input for many computing devices, it’s also quite easy to find cables that can convert DVI into HDMI as they are virtually the same in design, so it probably won’t be much of an issue for most users, especially since DisplayPort seems to be quickly becoming the new standard in display connectors.

The biggest question about any monitor is how the display looks and performs. In this, NEC distances itself from the competition. The monitor sports a 10-bit active matrix IPS LCD which can display astoundingly smooth gradients across the screen. Where most screens show a stair-stepped gradient from one color to the next, the NEC display can show virtually no color bands over the gradient at all. This is due to the monitor’s ability to display over 1 billion colors with its 14-bit look-up tables. Of course this is only possible with a graphics card that supports 10-bit color. Thankfully since many displays are starting to come with a 10-bit ability it’s a good bet that many more graphic card manufacturers will support this in the future.

Lastly, the display also comes with an ambient light sensor that can determine the brightness of the editing environment and either turn down the brightness of the screen or turn off the screen entirely when the lights are completely shut off. This option can save a lot of money since the screen will be using far less power. However, as impressive as the design of the display is, the most impressive part is undoubtedly its many color correction features.

Just like manual controls are an integral part of any professional camcorder, manual color calibration controls are extremely important in monitors as well. When it comes to this, the NEC does not disappoint. The PA271W can be purchased with the SpectraViewII Color Calibration Solution which includes both software and the familiar colorimeter puck. Initially skeptical of the puck’s ability to achieve accurate color due to experience with other monitors, we were very impressed by both the ease and the results of the hardware and software. Within three minutes we literally had our monitor completely calibrated and looking visibly richer in color. The software also comes with the option to save an ICC color profile that can be loaded on another monitor for matching displays. At the same time, it is possible to load an ICC profile or LUT into the NEC in order to match another display. If that’s not enough, the monitor can be completely calibrated by eye, using either one of the monitor presets such as sRGB, Adobe RGB, High Bright, Full and DCI. Additionally, the monitor can automatically correct for yellow color shift as the LCDs age, giving the monitor accurate color for a longer period of time.

For those who are environmentally minded, NEC’s PA271W shines again. It has an Eco-mode which conserves energy by allowing users to define a setting for the backlight and best of all shows the power savings of the monitor in watts per hour making this monitor both easy on the eyes and on the environment.

For serious pros that need some of the best color accuracy on the market as well as plenty of screen real estate to work with, the NEC PA271W is an excellent choice. Even though it will take a good chunk of change to enjoy the benefits of this monitor at $1399, the color accuracy and display options will no doubt make any editor happy they made the purchase.

With a huge list of features and controllable options, the NEC PA271W is the best option for editors doing color critical work.

Dan Bruns is an Associate Editor at Videomaker