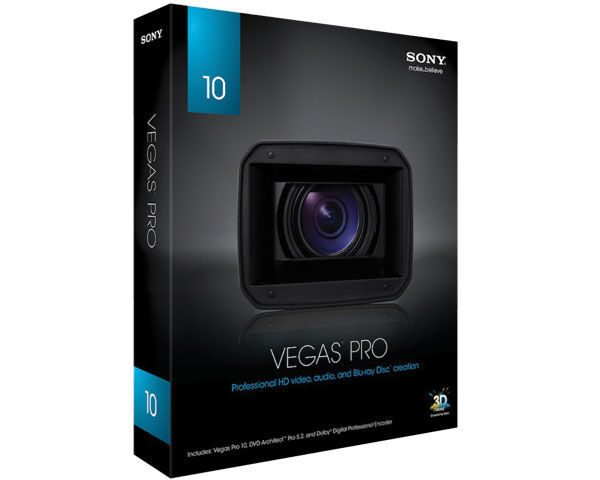 With the video industry evolving at breakneck speeds, Sony has worked to stay competitive in every category. The media giant’s video editing software, Vegas Pro, has always been slightly overshadowed by its aggressive competitors (Adobe Premiere, Avid Media Composer, Final Cut Pro) but with each new release, Sony manages to prove that Vegas Pro is not only a worthy competitor, but is in fact an editing suite that deserves some attention from both beginners and professionals.

Now I have to admit that as I opened the program on my Intel Core i7 950 system, I couldn’t help but be just a little skeptical. After all, I was a little less than satisfied with the Sony Vegas Pro 9 release. My doubts slowly dissipated as I loaded in the footage from a Canon 5D Mark II. I instantly noticed a huge improvement in performance from the previous release thanks to Sony’s added support of GPU accelerated AVC/H.264 decoding. As with a growing number of other video producers, I am primarily an HDLSR shooter so having an editing suite capable of handling the .mov files natively is very important to me. Not only was I able to easily import all 35 minutes of my 1920×1080 HD footage (previous versions had trouble loading more than 10-12 minutes) but I was able to easily edit the footage while smooth real time previews were delivered at a much higher quality than before.

As I edited my project and worked through the whole program I was reminded of how quickly and easily you can move around. What sets Vegas apart from its competitors is the convenience. Everything you need is available with the click of the mouse. Complex functions in other programs such as speed ramping, are incredibly simple. The interface looks and feels pretty much the same as previous versions but there is one change I instantly noticed. Sony added the ability to apply audio effects to individual audio clips, (a long overdue feature), whereas before effects could only be applied to the whole track. This makes editing audio much easier. I also noticed the addition of VU meters on the audio tracks which allows you to visually monitor audio levels on the individual tracks.

Of the new features packed into Sony Vegas Pro 10, my favorite by far is the image stabilization feature. What used to take the use of tracking motion in After Effects can now be done right in Vegas. The “Stabilize Media” interface is intuitive and comes with several different profiles to choose from including “handheld smooth” which makes handheld dolly shots look like they were actually shot with a dolly. Depending on how shaky the footage is, the image is cropped in to allow for movement of the frame. But overall a small price to pay for an amazing feature.

The color correction features have also been improved, which is something that I always felt was lacking with previous versions. Sony has also added a white balance adjustment to the collection of effects. It’s not perfect but it definitely makes warming or cooling your image quicker.

One of the biggest features is the ability to edit stereoscopic 3D footage. That’s right! You can make your own 3D movie. Assuming of course you have the right equipment to actually film 3D footage. I’ve seen some pretty impressive dual camera setups and Sony has a 3D camera right around the corner. I didn’t have any 3D footage to work with but looking at the interface, it is a very powerful tool as well as a very forward thinking move on Sony’s part. 3D video for consumers is on the horizon – ready or not!

Overall, Sony has made a great improvement in file handling performance as well as adding some very nice features that I am quickly learning to rely on. The interface is intuitive and very easy to move around in which is a reputation Sony Vegas has become known for. The ProType Titler is a little confusing at first but does work well once you get the hang of it. I would love to see the ability to change the video layer properties (i.e. hard light, overlay, etc.) on a clip level similar to the way Adobe Premiere handles it. Currently layer properties have to be changed to the entire track which makes adding overlay effects tricky.

Drive: DVD-ROM drive (for installation from a DVD only)

Sony Vegas Pro 10 is a powerful editing program and a worthy contender with enough features and control to suit any professional, but easy enough for beginners as well.

Brent Holland manages the media department for Build.com and is obsessed with his Canon EOS 5D Mark II