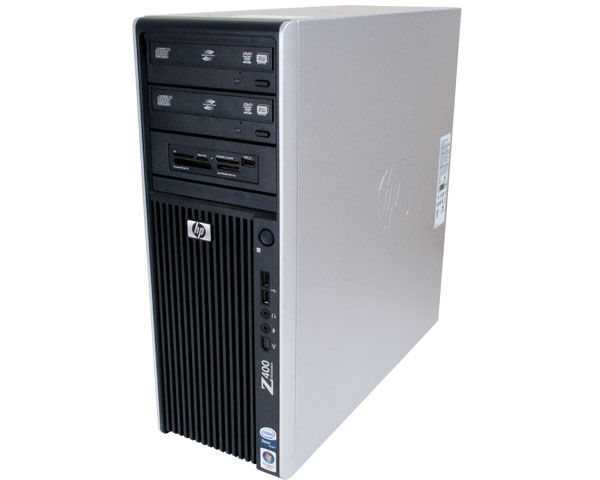 At 18% of the market, HP is the current market leader for all PC sales worldwide. Its large market share enables it to have multiple computer lines instead of the typical cookie cutter computer. The HP workstation line is designed with the video editor and 3D modeler in mind. The workstation line comes in four flavors: Z200, Z400, Z600, and Z800. For the video editor, the Z200 and Z400 models are just what the doctor ordered. If you’re more into 3D modeling then the Z600 or Z800 models may be a better choice. This review is for the Z400. 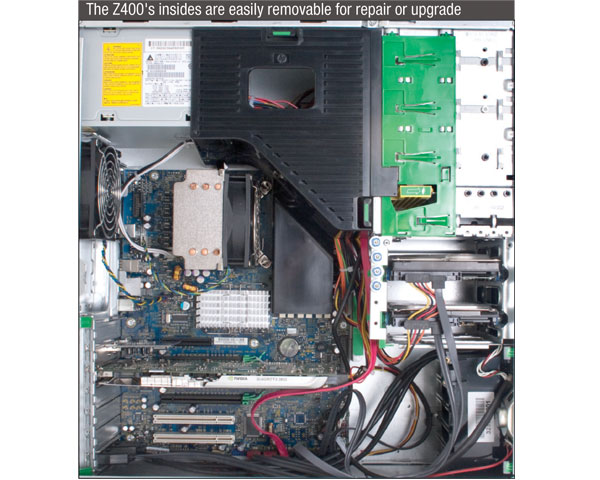 Unlike the Z200, Z600 and Z800 series, the Z400 case is very similar to the older XW series case. As usual the majority of the internal parts are tool-less. The fans, hard drives, DVD drives, add-in cards and covers all snap into place making it easy to work on. The case weighs in at 33 lbs, making it a bit heavy to move around, but it helps knowing the case isn’t cheap plastic. There are four fans in this unit making it quieter than your typical workstation. The biggest drawback to this case design for video editors is having only two available internal HDD bays.

This computer comes equipped with almost everything a video editor could need. There are two hard drives, one for running windows and a second for rendering videos to. It also comes with a Nvidia Quadro FX 3800 so you can also do some 3D modeling. This computer supports almost every media type: Blu-ray, DVD, USB, eSATA, xD, MicroSD, SD, miniSD, MMC, CompactFlash I/II, MSPro and MSPro Duo. Out of the box the Z400 just needs to have your editing program of choice installed and you are ready to edit.

Every component of the computer is top quality from the Intel motherboard to the 475-watt Delta power supply. The last thing anybody wants is a computer part to fail since downtime can be costly. On top of high quality components the Z400 comes with a 3 years parts and labor warranty. If you are looking for reliability and good service HP delivers. 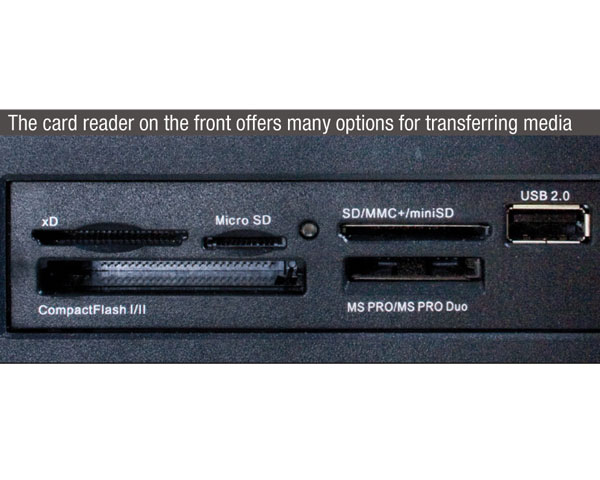 The first check was the hard drive performance speed using Blackmagic’s Disk Speed Test. For video editors, the hard drive can be a big bottleneck for rendering video files. The primary window’s hard drive managed to get 106 MB/s read and 76 MB/s write speeds while the secondary data drive got 92 MB/s read and 82 MB/s write speeds. This is average performance for a hard drive but there are much faster options available. If you are purchasing one of these computers you may want to buy an external eSATA raid like the LACIE 4Big Quadra for rendering video.

In past benchmarks, using 3DMark Vantage, workstations were achieving high CPU scores due to the Nvidia Quadro assisting the CPU. This “bug” has recently been fixed resulting in lower scores. As seen in the 3DMark Vantage benchmarks, the Z400 is a high performing computer. The XW6600 benchmarked very close to the Z400 but it had 2 processors compared to one. Essentially the powerhouse of yesterday is equal to the midrange computer of today.

HP offers many customizations for the Z400 line. When creating your computer, you need to take into account what it needs to do. For video editors, the CPU and hard drive are the most important things to invest in. As configured the 6-core Xeon W3680 is the best you can get in the Z400 line. If you want a dual processor machine, you may want to think twice. Many Windows programs do not handle dual CPUs well so there will be little boost in performance for the extra money. The graphics card is completely optional for video editors. CS5 Premiere Pro offers a performance boost when using the Nvidia Quadro 3800. As seen with the CS4 vs CS5 benchmark, MPEG files are rendered twice as fast. If you do not plan to take advantage of this then using integrated graphics will save you $1000 without a cost in performance. Overall the Z400 is a great fit for those interested in video editing.

The HP Z400 is a great computer for video editors.