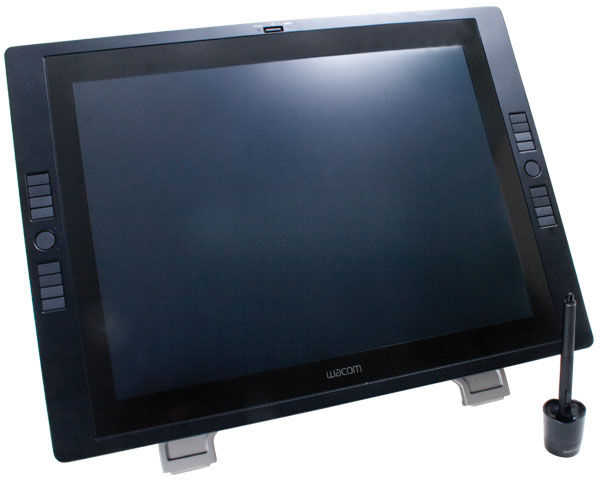 Efficiency. A word which defines the goal of every video editor, holds the key to a successful video business, and at the same time can be astoundingly difficult to achieve. Thankfully with the ever-changing landscape of technology, an efficient video editing workflow is quickly becoming a real possibility. Improvements in multi-core processing, graphics, and flash memory cards have obviously assisted in making video editing quick and efficient, but there are some less obvious tools that can be the final piece in the puzzle to a good editing workflow. Enter the pressure-sensitive tablet. 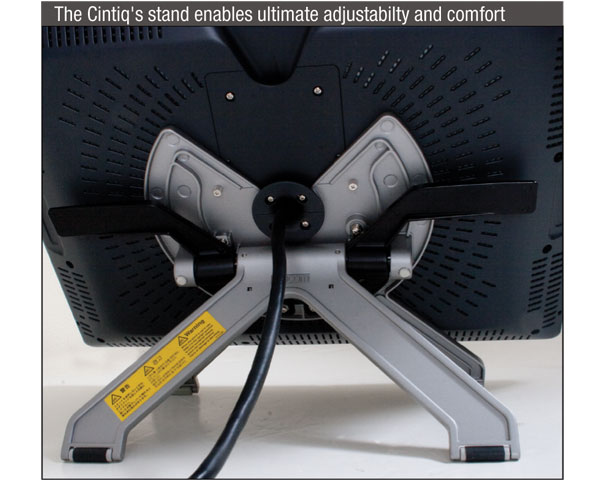 The Wacom Cintiq 21UX is a product made as an answer to designers who felt a disconnect between drawing on a flat pad and seeing the results on a vertical screen. In contrast with the Cintiq, designers have over 21 inches of screen in which to directly draw their masterpieces. Since a 16.5 by 22.1 inch screen is a bit large to fit on one’s lap (not to mention the fact that the Cintiq weighs in at 22 pounds) we found that the included display stand was the preferred way to draw designs on the tablet.

The back of the tablet also had a clunky and large wire that held both the power, USB, and a DVI cable, making it once again difficult to use on one’s lap or to bend the cable. This unfortunately made it almost impossible to run the cable cleanly through a desk or around corners.

Even so, the stand uses two smooth handles on the side of the screen to go from 10- to 65-degrees as well as 180-degrees in either direction making it feasible to use the stand on a desk while still maintaining the feel of an easel or notepad. The tablet comes with an application DVD which included full versions of Corel Painter Sketch Pad, Nik Color Efex Pro 3.0, and 81 custom Photoshop brushes made by Wacom. The included brushes were both natural and useful in mimicking how real brushes would react to the pressure put on the screen with the pen.

Once set up, there was a noticeable difference in color and brightness from the Cintiq to our Lacie LCD monitor. This was probably due to the fact that the 21UX only features a 220-candela per square meter brightness, as well as a 550:1 contrast ratio with support for 16.7 million colors. Taking a quick look at today’s HDTVs which have 400 candela per square meter brightness upward, and up to 2 million to one contrast ratios, this monitor seems a little behind in comparison. However, the tablet had a beautiful smooth black plastic case and best of all, 16 ExpressKeys with two rear-mounted Touch Strips that allowed us to change brush sizes, zoom in and out of compositions, or scroll through timelines frame by frame.

Using the ExpressKeys gave us the ability to assign functions such as option key, undo, or any other number of complex keyboard shortcuts to any of the 16 buttons on either side of the screen. This function made it possible to almost completely ditch the keyboard so that the only device needed for editing was the tablet and the included Grip Pen. This, by far, was the best part about the tablet. The Grip Pen had an incredibly tactile 2,048 pressure levels making pen movements on the monitor surprisingly accurate and natural. The sensitivity also made it easy to draw complex masks around objects in both After Effects and Photoshop without having to constantly hit the undo button. The pen is designed with a silicone rubber grip, pressure sensitive eraser, and a programmable two-button side switch. It comes with an attractive black stand which has been designed to hold seven standard, one stroke, and three felt nibs, or pen tips.

As complicated as this device may sound, it was astoundingly natural to draw directly onto the surface of the display which made it easy to start using without much tablet experience at all. The levels of pressure sensitivity helped make drawings look and feel natural as well, and, yes, left-handed users are able to switch sides and button selections to suit them better.

Whether using the clone and stamp tool, or masking objects in After Effects, the natural feel and accuracy of the pen on the screen helped to make editing easier. To be fair, as a result of the distance between the glass and the display, the pen never quite felt like it was the instrument doing the writing since the ink was just a tiny bit behind the pen, but the small disconnect did not ruin the experience. Also, the Touch Strips weren’t completely smooth especially when scrolling through web pages and zooming into objects but given more time, the controls would have surely felt more natural.(Remember when mousing felt so foreign and weird?) Lastly, when working on two monitors for editing, like we have at Videomaker headquarters, the Cintiq seemed a bit awkward. Since the whole selling point of the Cintiq 21UX was to be able to draw directly on the surface of the screen, it was hard not to feel like we would have been better served by just using a more affordable Intuos tablet when using two monitors instead of drawing on a display which was mapped over two monitors.

After taking the Cintiq’s design and ease of use into consideration, it would seem that for design and editing pros looking for a more intuitive and efficient tablet to make their designs and videos, the Wacom Cintiq 21UX is an excellent choice. The product is expensive so might not be the right choice for the budget-conscious video editor or graphic designer. Even so, with the ability to draw on the screen with more than 2,048 levels of pressure sensitivity, editors everywhere will enjoy both the tactile feel and excellent results that this tablet can offer for their edits and graphics.

Dan Bruns is an Associate Multimedia Editor at Videomaker