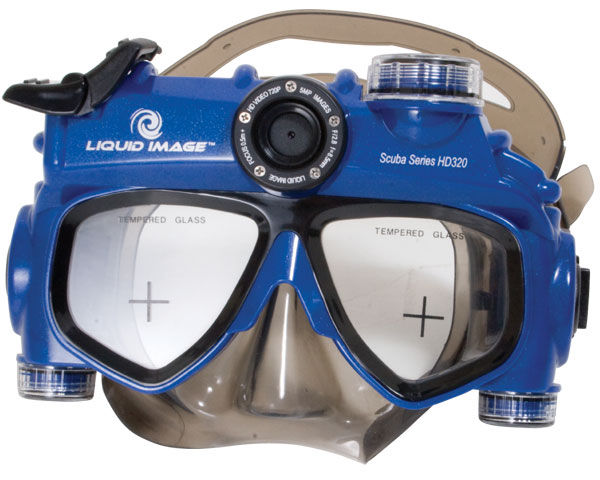 So you’re heading to the Caribbean and you want to take your cameras with you, but you’re worried about protecting them. And wouldn’t it be cool to have an underwater camera to take with you when you go Scuba diving too, but those large water proof housings are so expensive and so cumbersome to haul around. If you just had something that combined all these things and was still a quality product. Well the Scuba Series HD Camera Dive Mask from Liquid Image may not be the professional device you are used too, but it sure fits the bill when you’re out with your family and friends and don’t want to lug all the equipment.

Out of the Box Thinking 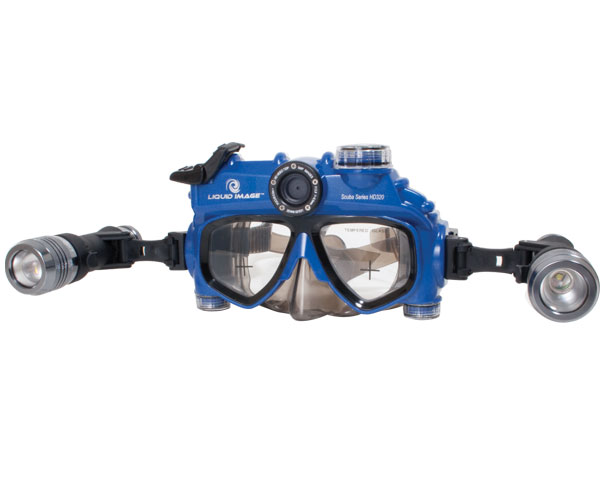 When I opened the box to review this “camera”, I was skeptical to say the least. I have been diving for more than thirty years and have my own underwater video company. How could this toy be a quality camera, let alone something that I would ever use? So I started by reading the manual- What? Don’t you read the manual first? OK, so I know the book looks huge and I know it’s sort of geeky, but the manual is actually written in 6 languages so what you really have to read is quite short and is really helpful.

In any case one of the first things that I was pleasantly surprised to find out was that the camera shot HD quality 720p video and was depth rated to 130 ft. which is well within the sport diving maximum depth, and, for most casual divers, a depth that you would rarely surpass. This fact told me that Liquid Image was thinking about the diver and not just the snorkeler when they were developing the Scuba Series HD. The other thing I noticed was that the mask was a quality mask. The skirt, which presses against your face, is silicon (which is a longer lasting material) and the straps and locking devices were solid.

Another item that is known to most divers but not to camera operators is that all masks do not fit all faces and Liquid Image addresses this by making two different sizes – the 320 which fits a narrower face and the 321 for wider faces. Also, while handling the mask, pre dive test, I discovered that the seals on the battery and memory compartments were very secure, almost to a fault. Even though this is probably the most critical part of any underwater housing and should be secure, constantly maintained and watched – because poor seals can lead to flooding the camera, I had to use gloves and a considerable amount of force to loosen them. Sometimes air and water pressure will lock these down and you don’t want to use any tools for this as you could crack the housing, but be prepared for a fight until the O-rings soften up a bit. With that being said, don’t be afraid to tighten them securely back when reloading the memory card or batteries. Liquid Image has even placed marks on the mask to denote when you have turned them to a safe waterproof locking position, which is a big help.

It wasn’t until I hit the water that I found out how neat this camera really is. For my test dives, I decided to add two additional accessories that do not normally come with the basic mask kit but are really needed for all your dives. The Blue Water Filter is a professional filter that I was surprised to see was an option, and is needed anytime you are below 5-10ft. It adds so much more color and warmth to your video/stills that it’s well worth the additional money. The other accessory, two metal encased battery lights, clip into cool adjustable arms that screw securely to the mask. You’ll need these lights below 30ft to add color to everything, even during the daytime, as the water filters out all the warm light as you go deeper. The spread of the light pattern is small but adequate. The arms allow you to change position from a wider softer two-split light pattern to a more concentrated single overlapping light pattern. This pattern may work better in daylight situations because of the increase in intensity of the light. One of the coolest parts of the lights I think is the fact that they are detachable and can be used as back up flashlights if needed. They do however use an odd shape pair of batteries. So you may want to be sure and pack a few extras. 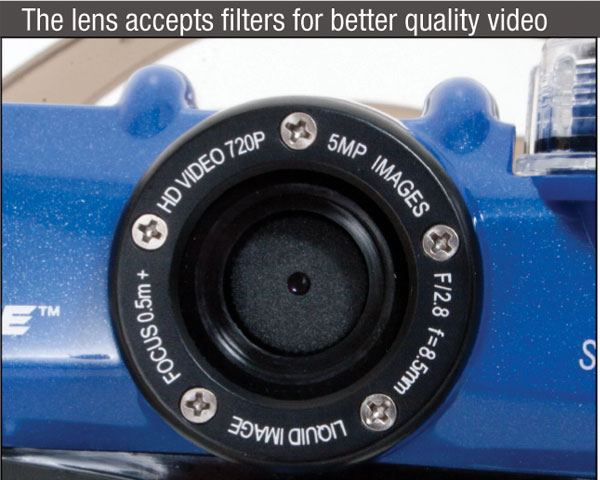 Now by adding these two items you might think it would make the mask clumsy or too heavy, but it actually doesn’t. As all divers know, things underwater weigh less and this camera mask is no exception. Shooting, on the other hand, with the Scuba Series HD underwater, will take a little getting use to. One of the hardest things about this HD camera is the framing. Liquid Image has placed two crosshairs on the mask to assist with the framing of your shot. However, these marks are not accurate for everyone. Depending on the location of your eyes inside the mask depends on where your subject will be in frame. Also, the distance of the subject from your mask/camera affects where proper placement will be too. Considering this camera only has a focal length of 1.5ft to 7ft, practicing your framing before you leave will become critical if you want to have your subjects centered in the shot.

Information provided at the time of this review did state that Liquid Image was working on a wider field of view camera which might solve this issue. However, when you finally get your framing down, shooting is a breeze. Two things I really like about the shooting aspects of this product were the audible sounds and the LED action indicators. Whenever you push the record button, located on top of the mask, a unique audible tone is emitted, letting you know that you are rolling, stopping or powering up /down. This tone can be heard quite clearly and is a solid confirmation what is happening along with the LED indicators. The Red or Blue LED indicators, which are located inside your mask, indicates whether you are using the still or the video portion of the camera and whether it is rolling/advancing or not. So at any point in the dive you can see and hear what’s happening even though you can’t see the data screen on the top of the mask.

Go Ahead, Give it a Try

So to sum it, I would say this camera pleasantly surprised me. Although it is not a professional video or still camera and should not be used as one, I liked it. The simplicity of it and ease of use makes me want to hit that learning curve hard on the framing issue so I can start getting quality shots. It is a bit more fragile than I would like but where it comes up short there, it makes up for in environmental protection. It’s not without flaws but it gets a thumb’s up.

The tricky aiming of the Scuba Series HD Camera Mask is a big issue in my book, but the simplicity and ease of use far out weighs the problems and makes it a good addition to the sport scuba diver’s gear bag.

Michael Reff is Director of Photography at Turner Broadcasting and operates an underwater video business.