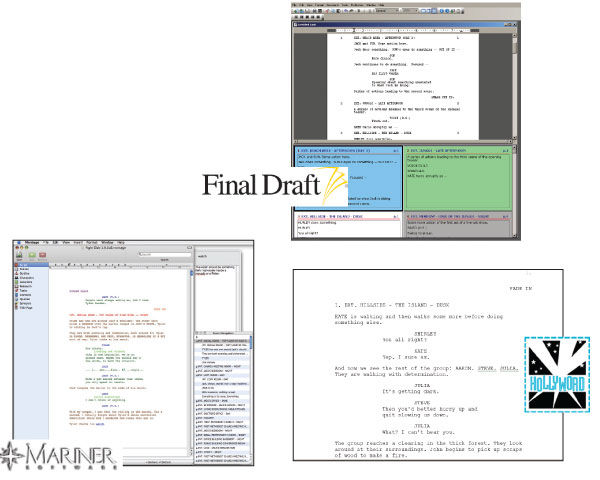 Whether you’re a first-time scriptwriter or have been doing it for longer than you can remember, there comes a time when you might feel the need to move into a more organized production, using scriptwriting software. Our associated Buyer’s Guide, explains several options available in scriptwriting software. This mini-review takes a look at three programs to give you an idea of what features are at your disposal and how they can help you work.

Final Draft version 8 is full of great features that allow you to focus on the most important part of scriptwriting: the words. Once installed, Final Draft opened with three windows on the display: Untitled Screenplay, Navigator and Script Properties. Wanting to jump right in, we started where it felt natural: in the Untitled Screenplay window. As we began to type, right away Final Draft’s SmartType began suggesting words for the slugline and character names. The shortcuts felt natural, making the process quick and easy to learn.

We noticed the Navigator window beginning to fill in as we typed, and it soon contained elements from our script without requiring any action from us. We were able to sort our content within the Navigator, as well as move through our script with ease. With a click of the mouse, we were able to navigate to a specific scene in our script, which spared us from scrolling through pages to find what we were looking for.

Another helpful feature was the Index Cards. We were able to rearrange elements of our story by dragging and dropping the cards into the desired order. Changes made in the Index Card mode were automatically reflected in the script.

The tutorials were helpful and thorough, covering everything from the basics of scriptwriting to more complex processes like using the Index Cards and the Scene Panel. The Ask the Expert feature is also a helpful tool when trying to refine various elements of your story.

Final Draft version 8 supplies the necessary tools to enable both beginners and seasoned professionals to write a script, seamlessly collaborate with a writing partner(s) via the internet and, when completed, break down the script in preparation for production. Overall, we found Final Draft version 8 to be conducive to the process of scriptwriting by allowing the user to focus primarily on the creative process.

Final Draft is a robust program allowing for seamless collaboration.

Montage 1.5 provides the building blocks needed to bring an idea to full fruition. The software is easy to use for beginners, while providing the necessary tools for more advanced scriptwriting techniques.

Upon launching Montage 1.5, we were presented with a tutorial. Though tutorials are generally dry and often skipped, the Montage 1.5 tutorial was presented in a manner that was not only entertaining but effective, and it got us up to speed in no time at all.

One of the first things we noticed about the interface was the View Panel located on the left. The View Panel allowed us to work on our script in a number of views, such as script, scenes, outline, character and smart views. These options allowed us to build our script from the ground up in a manner that was organized and easy to navigate. Smart view allowed us to filter our script based on criteria we chose. With a click of the mouse, all scenes pertaining to the criteria were listed, making searches manageable.

Montage 1.5 provides auto-formatting and auto-type that is easy to use and smart. The auto-type function kicks in as soon as you start your first slugline. And as you add character names, they are automatically added to the list for future suggestions, increasing the speed at which you can work.

Montage 1.5 doesn’t stop at script formatting and development. It offers numerous script templates, allows annotations and provides a place to store research materials for easy access, and a tasks function assists in tracking progress and items that need addressing. Montage 1.5 helps get your script out the door by providing printing features, help with query letters and a place to keep track of contacts.

We were quite impressed with Montage 1.5. The interface was intuitive, making it easy to jump right in. The software allowed us to write a script without feeling burdened by formatting, and the various ways to organize content helped maximize our time.

Montage 2.0 is currently in public beta. When released, 2.0 will be a free upgrade for customers who have purchased Montage 1.5.3 and up.

HollyWord is no-frills scriptwriting software for those who don’t want to bother with tedious formatting tasks.

Once installed, HollyWord works within Microsoft Word to provide the basic formatting needed to create a script. The auto-formatting allowed us to easily move from the slugline to the action line, character line and dialogue line without having to do more than press the Enter key. Moving backwards through the workflow (i.e., from dialogue to action) can be accomplished by either selecting the desired line from the toolbar or by pressing the proper function key.

To speed up the writing process, we were able to create shortcuts through the HollyWord menu tab. Once we took the time to set it up, this feature allowed us to type a character’s name or scene location by typing as little as the first letter and pressing the Enter key.

The StoryCard feature allowed us to outline our script. StoryCards also made it possible to move sections of the story around by simply clicking and dragging the line to its new location.

HollyWord’s auto-formatting saved us from having to format the document ourselves. However, that’s about all it did. Considering its retail price, plus the price of Microsoft Word, which is required to use the software, we were left feeling short-changed.

HollyWord is helpful when it comes to formatting, but that’s about all.