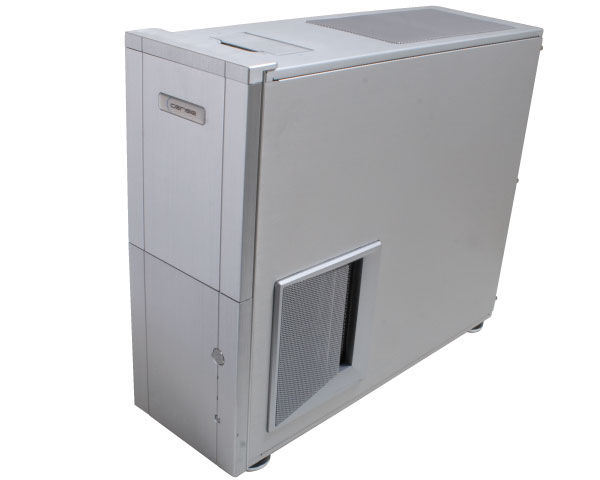 Over the years processors have been moving away from faster speed and more towards multiple processors. Intel just released its latest 6-core Xeon X5670 CPU and Cerise has put two of them together to make a 12-core workstation. The intent of this 12-core workstation is to be a top dog video-editing computer. 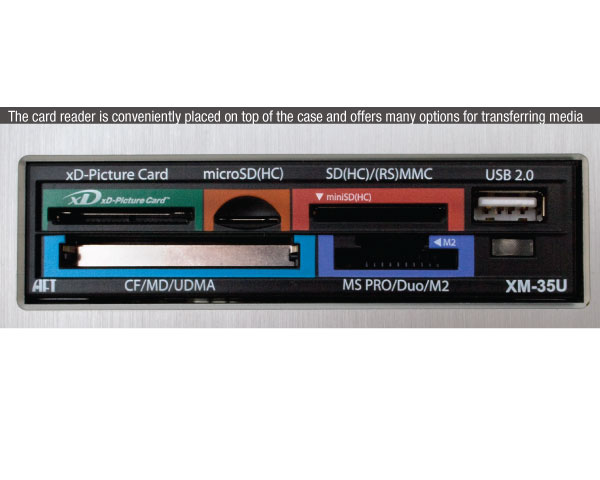 The case is made out of brushed aluminum and though bulky (8″ x 21″ x 25″) in size it is lightweight. The case is very well cooled, it has 3 120mm case fans and 1 120mm hard drive fan. Inside the case everything is very neat with all cables zip-tied and out of the way. Cerise offers a few different case designs depending on your configuration. This computer has a 750 watt Corsair power supply with a large 120mm fan. The motherboard is an Intel S5520C with lots of onboard features: SAS, 12 DDR3 Ram slots, 7.1 Audio, 2 1000mb/s LAN ports, 4 USB, and firewire. Plugged into the board are two Xeon X5670s. Six of the DDR3 slots are filled with 2GB DDR3-1333 ECC sticks making a total of 12GB. Since Adobe CS4 and other video editing programs currently do not require an expensive video editing card, this computer is only equipped with a Geforce GTX 260. For storage the computer has three 250GB in hardware RAID 5 and a 160GB Intel SSD for the operating system. For external media the case has a multiple format flash card reader and a Lite-On DVD-RW. Overall the case is very organized with all components easily removable but the case has the downside of taking up a lot of space. 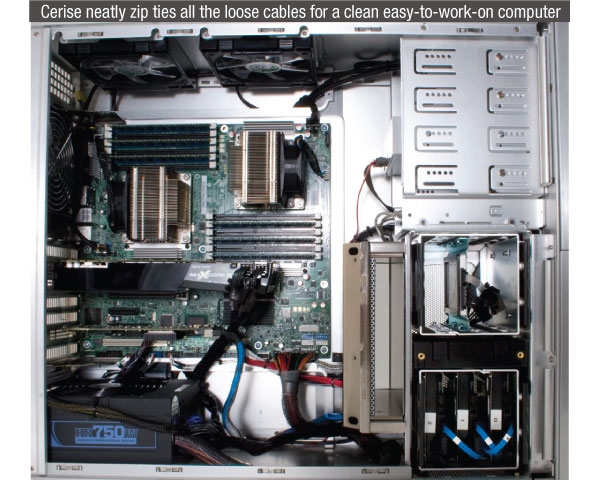 The first check was the hard drive performance speed using HDTune. The Intel 160GB Solid State Drive (SSD) has average speed of 150MB/s and 158MB/s burst. The 500GB raid 5 data drives have an average speed of 98MB/s with 136 MB/s burst. Having higher read speeds means programs and videos will load faster. SSD drives have an added bonus of instant access to all your files. Normal hard drives have mechanical parts that create a lag time while accessing your data. By using the SSD for the operating system Windows will boot faster and all programs installed on the SSD will open quicker.

Until we received the Cerise 12-core workstation the highest 3d Mark Vantage CPU score was achieved was by the Core i7 965 coupled with a Quadro CX. The dual Xeon’s attained a CPU score of 60234 vs 43307 by the Core i7 965. To test the render speed of the computer one video was exported 20 times in both MPEG and AVI formats with Adobe Media Encoder. The results were then averaged and compared against a Core i7 965. While exporting the AVI file the Xeon’s were 65% faster than the Core i7. When exporting the MPEG file the Xeon’s were 23% faster. This shows us in real world situation the new 6-core Xeon’s are faster than the Core i7 965.

As configured, this computer is not set up to handle 3D modeling. With the addition of an editing video card performance would be greater. In our benchmarks the Core i7 965 coupled with an ATI HD 5870 greatly outperformed the Cerise computer. Since the primary purpose of this computer is for video editing it is understandable for it to have low performance in 3D modeling.

The Windows Experience Index base score was 7.2, the highest rated computer we have had yet. The only piece in this system that is not top of the line is the memory, DDR3-2000 being the fastest out at the moment. The memory clocks in at 15080MB/s read and 8991 MB/s write. In comparison dual-channel DDR 400 clocks in around 5400MB/s read and 1750MB/s write.

The biggest problem with getting a 12-core workstation is there’s very few programs that can actually utilize it. The 3d Mark CPU test rating of the Xeon’s are higher than cheaper Core i7s. Unfortunately when it comes to real world tests using Adobe CS4 or 3d modeling programs there isn’t a huge performance difference. When one of the Xeon CPUs was disabled, leaving 6 cores running, there was only a 16-17% drop in performance in the 3d Mark CPU test and in the Premiere Pro test. Until programs are designed to handle all the extra processors, having dual Xeons won’t increase performance as much as they should.

This machine has only top of the line parts to ensure reliability, lifetime tech support, and is as fast as it gets. It is well built and out of the box it is ready for video editing. The system supports a variety of media devices so whatever you use to record video this system should support it. Everybody would love having a computer like this but the $7945 price tag isn’t a typical computer budget. Buying a much cheaper Core i7 or single cpu Xeon computer will suit the needs of the average video editor. Cerise has many computer options available to be customized for your needs. If the pricetag is in your budget then spoil yourself and buy one of these or check out one of Cerise’s other beefed up computers .

Top of the line computer that outperforms most but at a rich price tag.

Lance Olinger is Videomaker’s IT Assistant.