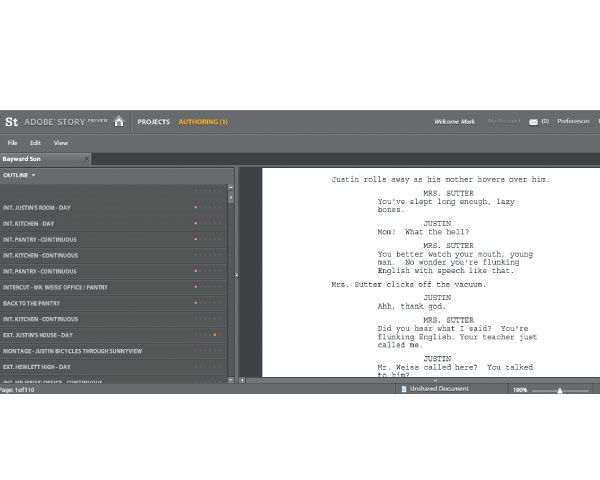 Adobe Story is a simple scriptwriting application with plenty of key features that makes it a great tool for video producers. The current version is in beta, meaning that it’s available for free on its Labs website (labs.adobe.com). Adobe intends to fold this application into its Production bundle in the future with some clever integrations. As for now, Adobe Story works both as an online web application and an offline application.

Adobe Story uses the AIR (Adobe Integrated Runtime) framework, allowing the application to be used with a standard web browser. This means there’s no download required, although you do need to have Flash Player version 10. You can point your browser to the web application and start working on your script after creating a free Adobe account. The online nature of Adobe Story means that you can also collaborate with other writers or reviewers of your script. And, if you want to work in the offline environment (let’s say you need that quiet getaway to focus on your writing), the web application can be downloaded and installed on your machine. When you return to civilization, your scripts will be synced back online the next time you log into the online application. It’s a rather innovative approach to how applications behave that provides much more flexibility in the way you write and review your scripts. 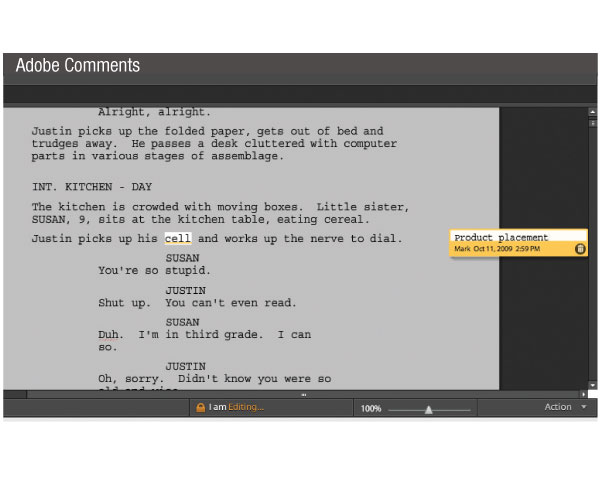 Adobe Story has a classic Adobe look, with dark gray columns and highlights in orange and white. We immediately started organizing our projects into categories in the Project sidebar. One of the nice features of Adobe Story is the way you can use categories to organize your scripts. You can create many categories and name them anything you’d like. We choose to use categories as different script types, so we created Narrative, Commercial, Presentation and Tutorial categories to cover each major type of script. Using these categories, we were able to categorize our projects. And projects are their own deal too.

A project can be named whatever you like and can be given a variety of properties, so that you can specify the type of script you’re working on. Once a project is created, you can add multiple scripts to it. In this manner of organizing your scripts, you can keep all the scripts for a project in one container. This helps if you need different versions of the same script. Perhaps you’ll have several different endings or different languages – you can make whatever your project requires.

Getting started is quite easy with Adobe Story. You can import from a variety of script file formats, including Microsoft Word and Final Draft. Adobe Story will analyze an imported script in order to properly identify the unique and redundant objects in the script. The goal is to retain much of the standard script format from the original document so that scene headings and character names become trackable elements in Adobe Story.

We first tried importing a very simple narration script with very little formatting, just to see how Adobe Story handles external files. We imported a Microsoft Word document. Adobe Story loaded the editor and fonts and, most importantly, the four-page document. We saw that it formatted the first line as a scene heading. That was not originally formatted that way, but it was understandable that Adobe Story interpreted the opening line as such. It’s not a big deal, and we were able to adjust the script to fit this unique format of a talking head script that was an audio overlay to a slideshow presentation.

We were disappointed to see that Adobe Story did not convert the apostrophes correctly. Anywhere in the script with an apostrophe was now replaced with three gibberish characters. This made the script pretty dirty. We tried to use the Find operation in the Edit menu, but it simply prompted us to use our web browser’s Find function. We tried that, but the text in the script was unsearchable. We had run into our first problem. We either had to convert the Word document to a friendlier document to import or manually fix every apostrophe. Neither option would save us any time.

One feature that we often see in more robust scriptwriting applications is also available in Adobe Story. When you type common words such as a scene heading, Adobe Story uses its SmartType feature to fill in the entire word. This can speed up your basic script elements that occur often.

Adobe Story also does a great job building an outline of your script as you write. The outline shows you each scene heading title. This allows you to click on any of the scene headings and the script will jump to that section. Additionally, the outline shows which characters are present in that scene heading by displaying a small color square. A different color represents each character, meaning that a busy scene has quite a rainbow of colors in the outline.

Scripts can be shared to allow other users to write, edit, review and tag your script. There is a variety of user types, including Co-writer, which allows another person to write and change the script, to Reviewer, which simply allows a user to read the script and make comments. Comments are easy to add. You can select a word or a section of the script and click on the add Comment icon.

The process of sharing a script is very simple when using Adobe Story online. You can select which script to share, enter an e-mail address and then assign the type of user it will be. Scripts are automatically synchronized between the users when using Adobe Story online. If you work with the offline version of the application, you can synchronize a script the next time you log in.

Adobe Story is not ready for prime time, but it does give you a glimpse of what’s to come. Adobe plans to integrate this application with the Production bundle. How it will be implemented is yet to be seen, but Adobe is looking to make monetizing your productions easier with a forthcoming tagging feature. Adobe plans to allow you to tag elements of your script. This may help you build in keywords to your production, perhaps to help online video with search engine optimization. This is all hypothetical at this point, but we’re intrigued.

Overall, Adobe Story has some nice features that work well if you consider it’s only in its beta version. There are still a lot of features that have bugs or are just missing from a solid web application. We were very pleased with the way Adobe Story allows you to organize your scripts. The SmartType feature and Outline feature are fantastic scriptwriting functions that make the whole process of writing much easier. Our recommendation is to give it a try if you’re interested, but waiting for the full-featured and polished version will be in the best interest of most of our readers.

Keep your eye on Adobe Story as it matures into a polished application and is integrated with the Adobe Production bundle.