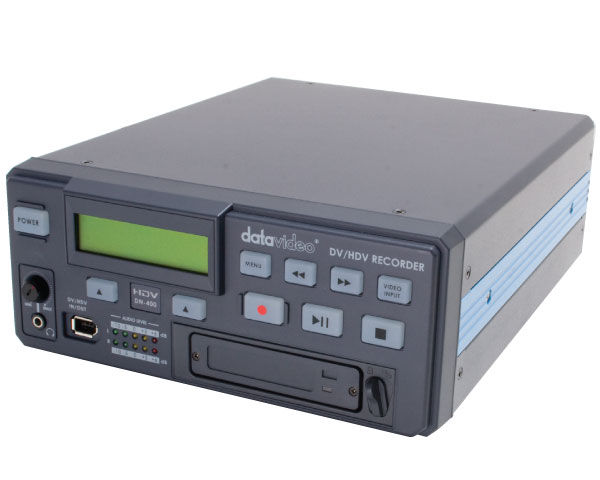 Getting media onto a computer can sometimes be a time-consuming process. Some older camcorders and equipment don’t even have hookups to plug into a computer. In the field there isn’t always a place to unload your data when a tape or SD card fills up. For this, Datavideo created the DN-400 DV/HDV Recorder.

The DN-400 is essentially a fancy video recorder/converter. Camcorders with FireWire output and any other devices with component (YPbPr), composite or S-Video outputs can be plugged into this device and have the video output saved in DV format. Need to convert old VHS tapes? Plug the VCR into the S-Video input, start the VCR, and hit record. Camcorders plugged into the device with FireWire can also playback videos stored on the DN-400. The device also outputs HDV files, but only through HDV FireWire devices. All the video is saved to a 250GB removable 2.5″ hard drive that has both a USB port and a SATA connection (useful if your computer happens to have the same type of SATA docking bay as the removable drive) to allow the data to be retrieved from a computer. 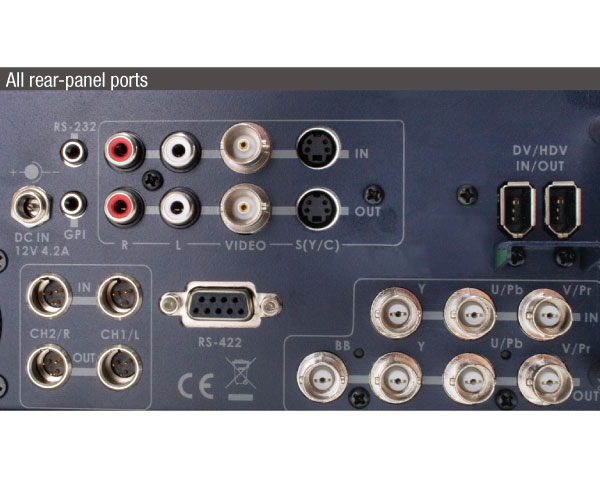 At first, the DN-400 looks like a complicated piece of hardware with lots of plugs and buttons, but it’s easier than it looks. Some reading of the manual is required due to some of the device’s quirks. For instance, the device may freeze if multiple camcorders are hooked up. There is a setting in the menu that fixes this problem, but disables video playback. The rest of the device is very straightforward: plug a camera into a FireWire port, start your video, and then push record and play on the DN-400. For analog devices, the input type must first be selected from the menu, and then the VIDEO INPUT button must be pushed before the DN-400 can record from it. A person with little experience with video could figure out how to use this device in under an hour.

In order for the video recorder to be compatible with both PCs and Macs the data drive is formatted as FAT32. Unfortunately this means that the largest file size is 2 GB. A large video is thus broken into many 2 GB pieces. There are two ways to access the data from a PC or Mac: plug the external drive in via USB or connect the DN-400 via FireWire and enable HDD mode on the device. While in HDD mode the device can not do anything, but all the data can be accessed. Datavideo made software to batch all of these together and output the video in multiple formats: QuickTime, AVI Type 1 and 2, Sony ES-3 Canopus AVI Type 1 and 2, Sony DSR DU-1 DV (.dvd), Matrix RT2500 DV, Avid OMF DV, Raw DV (.dv, .dif, .dvsd). Unfortunately, the converter actually makes the files take up more space than the original raw file, instead of compressing them to a more usable size.

The DN-400 video recorder is an item of convenience. DV/HDV camcorders have FireWire plugs that will hook up to a computer and transfer the video. The DN-400 eliminates the need of the computer and the software. Its best attribute is the ability to store up to 18 hours of video. DV/HDV tapes, on the other hand, store one hour of video. Newer camcorders with flash memory cards can store more but nowhere near the amount of a removable hard drive. While recording video where the camera doesn’t need to be moved, the DN-400 could be hooked up and eliminate the need for a tape. If you store a lot of video and don’t like dealing with importing media off your camera, this is for you.