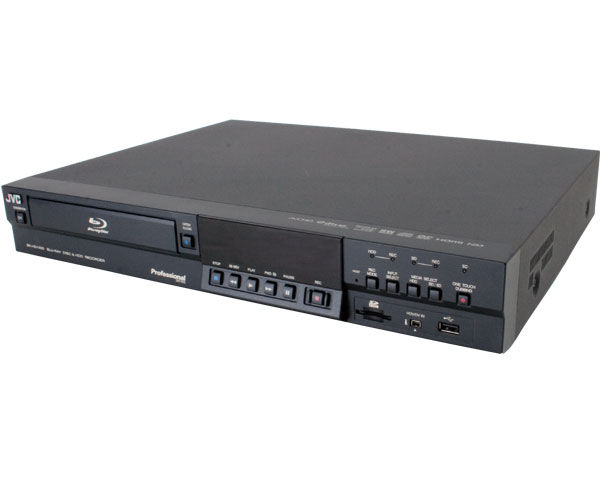 JVC not only makes camcorders, they also manufacture great decks and JVC’s SR-HD1500 is no exception. The JVC SR-HD1500 is a tapeless HD DVR combo deck that features a built-in Blu-ray recorder and an internal hard disk drive for simple HD and SD disc duplication. It includes authoring without the hassle of incorporating the use of a computer.

We’ve all heard the phrase if something is lightweight, it’s usually built cheap. That’s certainly not the case with the SR-HD1500, weighing in at a whopping 11 lbs. The deck has a sleek black finish with the form factor you would expect from a traditional Blu-ray or DVD deck, except this deck is loaded with an assortment of professional features. The face of the deck has inputs for FireWire IEEE-1394, an SD/SDHC memory card slot, and USB 2.0 along with the traditional display and button layouts you would want on a deck. On the back you can find a HDMI out, Digital Audio Out (Optical), Component out, Composite in and out, S-Video in and out, remote in for connecting a wired remote, and a Serial connection for connecting the deck up to a computer for external control and automation. 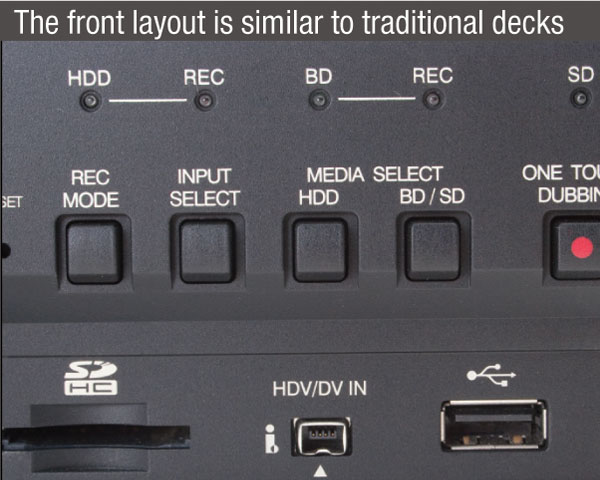 The SR-HD1500 has a very straight-forward intuitive user interface that makes duplication a breeze and is surprisingly faster than dealing with a computer. There are several different options on this deck when it comes to duplication. Simply press the “One Touch Dubbing” button and select the input device whether it be from an SD/SDHC memory card, USB or FireWire device. The data will then be uploaded to the 500 GB internal hard drive and is ready to be burned to Blu-ray or DVD optical discs. The SR-HD1500 has the ability to do very simple editing, like butting clips together, seamless transitions and setting up play lists. The deck can also author customs discs so that they can be played automatically upon start up or repeat continuously, this is ideal for kiosks, presentations and point-of-sales displays. Imagine shooting an event or film and hooking a camera to the deck using FireWire or inserting an SD/SDHC memory card into the card reader and burning off full HD dailies or clips for clients to see immediately. This deck will allow a person to burn up to 24 hours of high quality full HD on one 50 GB dual-layer Blu-ray disc for those looking to store lots of data on one disc. 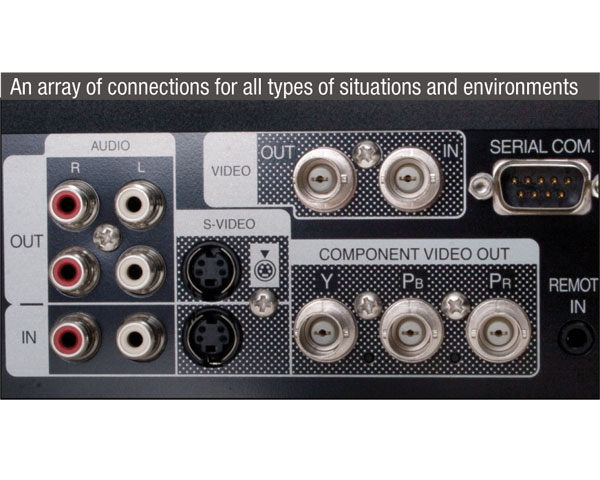 Recently backing up one’s data to DVD was the standard, however Blu-ray is now becoming the new standard. As a result, we are all now faced with the daunting task of backing up all of our data to Blu-ray and thankfully, the SR-HD1500 will do just that. The deck is the missing link in simple DVD to Blu-ray conversion allowing one to back up several smaller capacity DVDs to one larger capacity Blu-ray disc. Whether it be home movies for clients, or a series of videos, the SR-HD1500 will do the job.

One thing to note: the SR-HD1500 will dub unprotected Blu-ray and DVD optical discs but it will not burn anything that is protected, so if an editor is looking to back up a Blu-ray collection or some commercial DVDs, the SR-HD1500 would not allow one to do so.

JVC’s deck is a conversion master with DVD up-conversion and backwards compatibility. In this, the SR-HD1500 proves to be a valuable tool. Additionally, the SR-HD1500 has digital and analog inputs, making it compatible with an assortment of formats and devices. One can also easily down-convert from Blu-ray to DVD optical discs while storing footage on the internal hard drive for formatting, editing, converting, or temporary storage. The deck also supports importing from most camcorders with the following file formats; AVCHD, HDV, and DV via FireWire IEEE-1394 and USB 2.0. The following discs are supported; BD-RE, BD-R, DVD-RW and DVD-R discs. On top of that the deck plays back but does not dub the following; commercial DVDs, CDs, DVD-RAM, and BD-ROM discs.

Whether someone is a lone wolf producer or a major post-production facility, the demand for Blu-ray is here and the SR-HD1500 delivers. With this deck, one can effortlessly convert or archive a client’s home movies to Blu-ray or DVD and give them multiple copies. The deck also creates BDMV (with menu) or BDAV (list of files) discs with auto-start or repeat playback actions. The SR-HD1500 saves a lot of time when it compares to authoring Blu-ray discs using a computer, saving editors and shooters a lot of money.

JVC’s new deck packs a ton of professional features at an affordable price. The SR-HD1500 would make a great addition to production houses, schools, houses of worship or any business that requires quick dubs of Blu-ray or DVD content. For those who plan to cross over into the Blu-ray world, this deck is ideal. Duplication is simple, the menu layout is straight-forward, the deck is versatile. You won’t find a deck at a similar price with this many bells and whistles on the market right now.

For those who want to incorporate Blu-ray into their workflow, it’s hard to go wrong with JVC’s SR-HD1500.