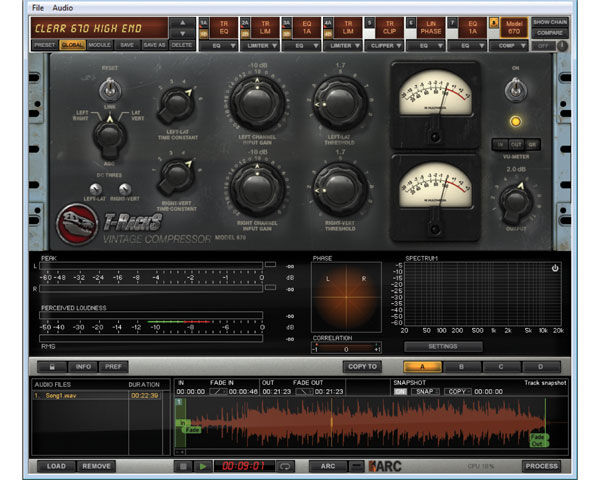 Formerly the exclusive realm of engineers tucked away in expensive high-end studios, audio mastering had long eluded both the abilities and the pocketbooks of the average video producer. As economics and artistic drive have led more and more producers to become proficient at every aspect of their productions, companies have stepped up to deliver software based mastering solutions into the hands of said producers that are strong on performance while not overly stressing the bank account. T-RackS 3 Deluxe by IK Multimedia is one such solution.

The Standard T-RackS bundle consists of, and the Deluxe version includes, a set of four “Classic” processors. The Classic Equalizer offers EQ across six bands with a great deal of control, allowing for detailed tweaking. The Classic Multiband Limiter can be used to tighten up specific frequencies in addition to its usual compression uses. The Classic Compressor along with the Classic Clipper completes the listing. 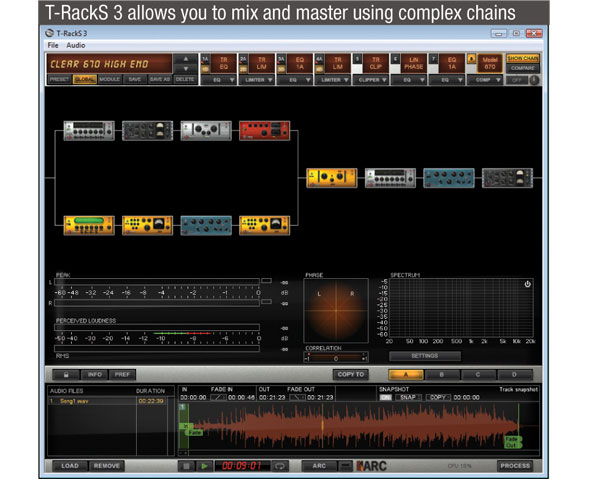 Of particular interest in the Deluxe version is a new set of processors modeled after very expensive pieces of hardware from days gone by.

The Vintage Compressor Model 670 emulates the classic Fairchild 670 compressor – down to the dials, meters, scuffs, scratches and rust streaks on the GUI faceplate. The sound it provides is exceptional, adding just the right touch of musicality and emotional character to the piece. The Vintage Compressor offers both stereo and MS (mid/side) processing. MS processing is very handy in that it can allow one to pull the lead vocal or a specific instrument forward using the middle channel. This feature is also included in the Vintage Equalizer EQ 1A, the Opto Compressor and the Classic Equalizer.

The Vintage Program EQ 1A is modeled after the sound qualities of the classic Pultec EQP-1A, well known for having excellent character and musicality.

The Opto Compressor, while not apparently modeled after any particular piece of actual hardware, offers noticeably more transparency than the Vintage Compressor Model 670. Tracks benefit from optical compression due to the absence of distortion and coloration sometimes encountered during gain reduction.

The Linear Phase EQ offers a high level of transparency and precision, allowing for adjustment of the tonal balance across six bands without imposing additional color on the piece, while still maintaining the integrity of the original sound.

Finally, the Brickwall Limiter boasts nine different algorithms that allow you to optimize your limiting style from distortion-free limiting to various other clipping and limiting scenarios.

More Features To Chase Away Those Mastering Blues

The T-RackS 3 Deluxe interface features a mastering/mixing chain where you can run up to twelve instances of any of the nine T-RackS processors, including multiple instances of the same processor for sophisticated parallel and series processing.

T-RackS 3 Deluxe can be used either as a standalone application or as a plug-in with your host DAW. Previously, all of T-RackS had to be loaded just to use a single processor. Now, any one of its nine processors may be used individually, resulting in increased flexibility and reduced computing overhead.

When used as a standalone application the lower half of the T-RackS interface displays a number of useful metering tools. Left and right channel peak meters, RMS metering, spectrum analysis, stereo phase and correlation meters. The Perceived Loudness indicator, part of the RMS meter, compares the loudness of the piece to a “Loudness Suggestion” based on the selected genre.

There is a “Copy To” button, which allows one to save and compare up to four different processing chains per project. Changes both great and small may be saved, recalled, adjusted and re-saved as desired with this handy little button.

Whatever the desired shape of your production’s sound, T-RackS 3 Deluxe definitely has what it takes to get you there.

A good value for the money with high quality processing and superb sound as the result. This is a good place to start for the video producer wishing to truly “master” his or her next production’s audio.

Works as a standalone application, as well as a plug-in

Multiple curves Fade In and Out (standalone only)

Multiple Snapshots, independent for each audio file (standalone only)

Supports sampling rates up to 192 kHz

Whether you want transparency in your tracks or just a little character T-RackS 3 Deluxe delivers.