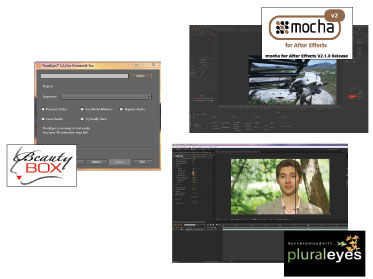 Plug-ins are truly amazing. With just a few lines of code, a video project that seemed to be doomed for the dumpster can suddenly produce a video destined to win an Academy Award. For years, plug-ins have been relatively inexpensive ways to improve the functions of video editing software. To prove this all over again, we thought we’d give you a look at three different types of plug-ins you might find of interest. Three companies, Imagineer Systems Limited, Digital Anarchy, and Singular Software, have developed products that open new doors to video editors worldwide.

Tracking or stabilizing video can be one of editing’s cruelest and most unforgiving tasks. Even with professional level editing and compositing software, tracking and stabilizing footage can be a frustrating endeavor. Especially with pixel or point trackers, one crazy bit of noise or obstructing object can turn a track into a nightmare. This is where Imagineer Systems steps in with its second iteration of its powerful tracking software called Mocha.

Simply put, Mocha does what other trackers can’t. It tracks videos with heavy motion blur, heavy grain, and even objects that go off screen. The software works by having a user draw a spline mask around any object that seems fit for tracking and then hitting the track forward button. It’s that simple. With it’s powerful planar tracker, Mocha virtually does the rest.

In our tests, we took some science fiction footage that we shot for Videomaker’s Basic Training Tutorials series and tracked some mountains in the background. While that may sound simple enough, we didn’t stop there. The mountains started out of focus, a gate crossed over the shot twice, the mountains left the frame at the end of a crane move, and on top of that, our footage was shaky. In our opinion, there couldn’t be a better test of a tracking system. Believe it or not, Mocha was able to handle everything thrown at it. It followed the mountain all the way out of the frame until it was completely gone. Once a person has experienced successful tracking like that, it is tough to ever go back to pixel trackers. Mocha comes bundled with After Effects alone or in CS4 or Cs5. If purchased separately, the high cost of the product lends itself best for those who really need a high degree of accuracy in their motion tracking and stabilizing.

As anyone knows, it can be tough to stand out from a crowd, especially when the crowd is as big as NAB. Even so, Digital Anarchy’s product stood out so well that it was awarded the prestigious Mario Award for the plug-in called Beauty Box.

The reason is because Beauty Box does what was only previously possible for Photoshop artists and video editors with a ton of time to spare. By using a powerful face detection algorithm along with smart smoothing and blur settings, this plug-in allows video editors to make even the most self-conscious talent happy by tracking and smoothing unwanted blemishes in skin.

In our test with the product, we used some recent footage of our talent from our Reception segment of Videomaker‘s Wedding Videography series. In After Effects, we applied Beauty Box to our host’s face to see if we could make it look even cleaner. Surprisingly, even with the default settings we were already able to see a significant improvement. Just to make sure, we went to a frame in the video where the talent was looking straight at the camera and clicked “Analyze Frame” in the Effects window, and voilá! With just a small tweak of the smoothing settings, we were able to make our talent’s skin look several year’s younger.

Rendering the footage took a while, especially when the smoothing settings were high, so it is best for editors to allow more time in their workflow if using this plug-in.

There’s no doubt that the introduction of multi-cam tools in editing software gave editors all over the world a way to save valuable time and money. With properly aligned footage in one sequence, video editors could quickly see and choose the angle they wanted to lay down with the click of a button. The downside was that it took a lot of time to sync the audio, especially with lots of tracks. Now, with the DSLR revolution, more editors are having to sync external audio with their DSLR footage; a very consuming endeavor. For this, Singular Software released a powerful plug-in called PluralEyes.

PluralEyes takes footage with an audio track and syncs them to a master audio file with just one click. In our tests, we took some footage of a wedding that was shot in SD. We had three cameras covering the event with a master track recorded on CD. Two of the cameras were also recording audio from their built-in microphones. We placed each video randomly on its own track in Final Cut Pro and then started PluralEyes. Once it was open, we simply pressed “Sync” and after reading the audio from our clips, PluralEyes put them all into sync besides the ones that had no audio to begin with. Using markers and the special tools that PluralEyes offers, even the hard to sync areas can be perfectly aligned.

PluralEyes has proven to save time in a multi-cam workflow. With it’s affordable price and powerful set of features, it is most definitely worth taking a look at.

These plug-ins will give video editors even more tools to make compelling videos that make people say, “How did they do that?”