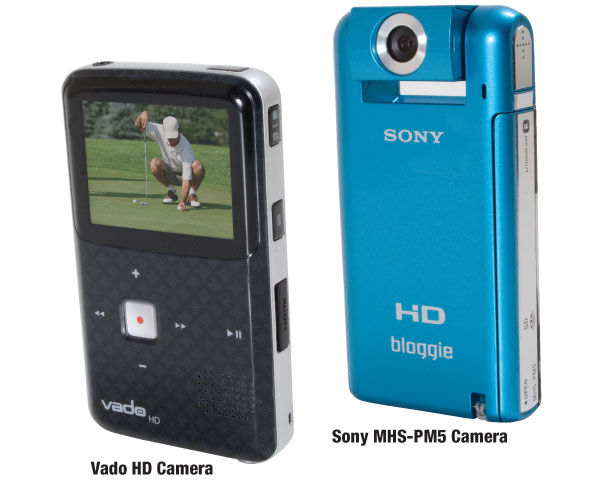 Tiny little cameras, what we’re calling “Pocket Cams” here at Videomaker, are swamping the marketplace. They can’t do all the things our larger more robust camcorders can, but they do have a place in our world by being easy to grab-and-go with simple sharing abilities. This issue we review two such cameras, to give you an idea of different features – Creative Lab’s Vado 3rd Generation HD cam and Sony’s MHS-PM5, known as the Bloggie.

Creative’s Vado HD 3rd generation pocket sized camera packs quite a bit of value into a very compact package. Sharing the top edge of the camera with the power button is a multi-function port that allows you to plug in your headphones, an analog AV cable for watching your videos on a non-HDMI display or, most notably, an external microphone for improved audio recording.

The bottom of the unit sports a standard tripod mount and a very convenient, built-in, flexible USB connector for charging the camera’s battery or transferring your video and picture files to your computer. Down one side of the camera, you’ll find an HDMI port for viewing your Vado HD videos on an HDTV (in 720p), the delete button and the Mode button, which allows you to quickly switch back and forth between shooting video or snapping digital stills.

Holding down the Mode button for a few seconds allows you to access the Settings Menu where you can configure, among other things, Video Quality, Instant Record and Motion Detection. Instant Record allows your camera to wake up quickly from power saving mode for instant recording by pressing any button, while Motion Detection starts recording automatically when motion is detected for at least three seconds.

We tested the video quality at both the HD+ (enhanced high definition) and VGA settings. While HD+ mode records in wide screen and VGA records in the standard 4:3 aspect ratio, the difference in quality was minimal. There is a significant difference in recording time, however: one hour in HD+ and four hours in VGA.

We found the battery life (around two hours) to be quite acceptable and was impressed to see that Creative had included the ability to manually adjust the exposure setting while in Record mode by pressing the Rewind (decrease exposure) or Fast Forward (increase exposure) buttons.

Sony’s new MHS-PM5 camera – better known as the bloggie (that’s right, with a lower-case “b”) – has some great features as well as a few areas that could use some improvement.

Its most unique feature has to be the swivel lens. It swivels 270 degrees and provides some very nice advantages. First, even though the bloggie has an On/Off button on the side, simply rotating the lens outward powers it up instantly, allowing you to pick it up, rotate the lens and start shooting. When you are finished, simply rotate the lens to the closed position. It not only turns off the power, but also provides protection to the lens. Another advantage to the swivel lens is that it makes for some very easy self-shooting. Rotate the lens until you see yourself in the display and begin recording.

Another big plus is the removable media slot. You can use either Memory Stick PRO Duo or SD/SDHC cards for expanded recording capacities. The bloggie does appear to have one little quirk though. At just under 30 minutes, the camera will stop recording and you’ll have to hit record again to continue. Short bursts of recording will be unaffected, but if you’re shooting your child’s school play you’d better hope they’re not performing at about the 28 or 29 minute mark. This “feature” is pointed out in the bloggie handbook – “Continuous shooting is possible for approximately 29 minutes.”

Unfortunately, the bloggie does not have the ability to use an external microphone. This would have added greatly to its usability and sound quality. Oftentimes, tradeoffs are made in the battle between smaller devices and the quality of their images. Smaller lenses and smaller imaging sensors make for poorer sensitivity in low light conditions and the bloggie seems to have fallen victim to this harsh reality. While the camera shoots 1080p HD footage, I found the overall quality to be less desirable than some other similarly priced cameras.

A look at two types of pocket cams with differing features in the $200 and under price range. The Sony Bloggie has a rotating lens for catching varied angles, and the Creative Labs Vado has an internal mic port and selectable recording modes.