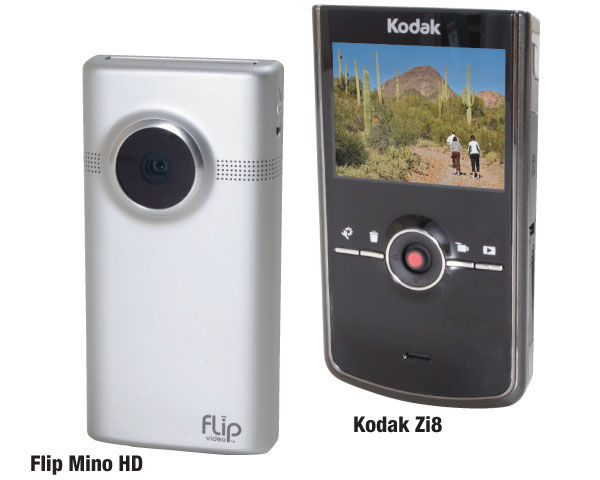 The last couple of years have been popular ones for miniature, easy-to-use camcorders. People have put a premium on being able to shoot video on a device no larger than their iPhone or Zune. And so, it comes as no surprise to see companies, such as Pure Digital Technologies (now owned by Cisco) and Eastman Kodak company, battling it out for dominance in the market. We recently looked at two examples from these companies to see how they stacked up in 2010.

The Flip Video Mino HD is one of the latest in a line of ultra-accessible pocket camcorders by Cisco. The unit comes in several colors, but the one we reviewed came in black. It is quite small, measuring about four by two inches, and is just a little over a half-inch in thickness. The front panel has buttons for zoom, record, play, stop, and for cycling through video. The right side features a small power button. The left side has a switch that sends a top-mounted USB plug flipping out when pulled, hence its name, The Flip.

The Flip is rather spartan when it comes to accessories, retailing with only a wrist strap and soft case for protecting the LCD screen. The unit, which shoots 720p video, does allow it to be connected to a high definition TV through an HDMI cable, but the necessary mini-HMDI connector was not provided.

We shot some footage both outside, and inside in low lighting. The Flip was comfortable to use and captured subjects in the frame well. The zooming, however, left a little to be desired. And the lack of focus options made it such that details a few feet away from the camcorder were occasionally out of focus. Playback on a Samsung HDTV was respectable and a definite step up from standard definition camcorders.

We were impressed with the 4 gigabytes of storage on the Flip, which stored about one hour of video. However, memory expansion is not supported. What you buy is essentially what you get. The best thing, hands down, about the Mino HD is that it’s amazingly simple to use. Hit the record button and you’re rolling. Hit it again and you’re done. Hit play and you can instantly review your footage. Hit the trash button, and boom, those old unwanted videos are history.

Like any product, the Mino HD does have a few downsides. One is that it charges via USB. And while this is no big deal for anyone who uses the computer a lot, it might troublesome for those looking to shoot and charge quickly, as you will need to buy an additional adapter to charge via a wall outlet. Also, it can’t take still photos in any shape or form, which is too bad.

The Kodak Zi8 is a pocket camcorder aimed at the higher-end market. The Zi8 looks similar to other pocket camcorders – it, too, measures about two by four inches and is offered in three colors Black, Aqua and Raspberry – but distinguishes itself immediately by its larger screen size and 1080p sticker. Yes, this camcorder does shoot full HD.

The Kodak is simple in design, featuring the usual stop, play, record and menu buttons. Its red center button functions both as a record button and a scroller for the onscreen menu. On the unit’s sides are a mic input, SDHC expansion slot, USB plug, AC adapter slot and HDMI/A/V jack.

The Zi8 comes with plenty of welcome accessories: wrist strap, HDMI cable, A/V cable bundle, AC adapter, and paper manual. Curiously though, it does not come with a complimentary memory card. We thought this was odd because the unit only has 128 megabytes of internal memory, and this gets eaten up very quickly when shooting in full 1080p mode.

We shot test footage in several modes: 1080p, 720p at 60 frames per second (useful for sports action), and WVGA (for the Web). We also tested the still shot function on the camera and found it actually took decent pictures… much better than the average cell phone camera. Playback showed the Zi8’s slight difficulty with low lighting, and some of the video came through a little soft. But in general, the quality was quite good.

Shooting and editing video from beginning to end was very user friendly and easy. The menu, however, was a little cumbersome to navigate. The center button has a tendency to stick, and it’s far too easy to get locked into a quality mode you don’t want when the button interprets a scroll as a button punch. This means getting used to it will require some slight trial and error.

The Zi8 does come with its own software for editing and upload (PC only). It was about what one would expect from bundled software – functional, but not standout. Dragging and dropping files in Windows or Mac OS works about as well, so there’s not a lot gained or lost either way with the suite.

Both of these affordable cameras hit the market with a solid splash and will satisfy buyers looking for cheap and portable solutions. The Flip is ideal for amateurs and college students on a budget. The Zi8 is exceptional for those looking to get a few more pixels out of their video. Either way, you get a lot of bang for your buck in the $200 and under price range. Both are recommended.

Wishing to check different features and functions in the pocket-cam category, we also reviewed two other pocket cams – the Vado HD 3rd Generation Camera from Creative Labs and the Sony Bloggie.

A look at two types of pocket cams with differing features. The Flip Mino HD is ideal for amateurs and college students on a budget. The Kodak Zi8 is exceptional for those looking to get a few more pixels out of their video. Either way, you get a lot of bang for your buck in the $200 and under price range.

Evan Burt is a journalist and published author writing in Northern California.