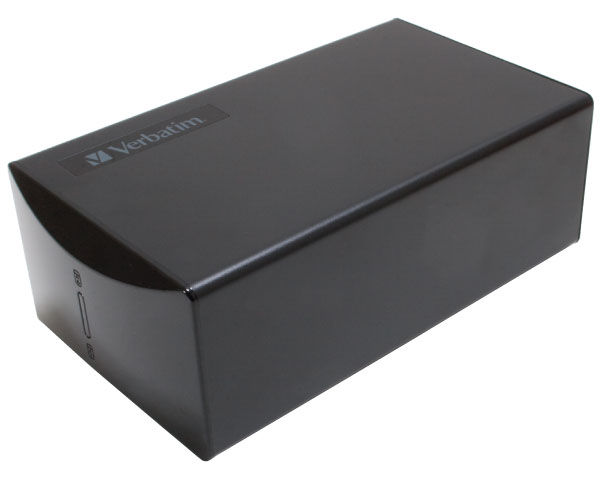 With solid-state media quickly becoming the standard recording format for both professional and consumer camcorders, video producers have been feeling the pressure of keeping their footage safe. To solve this problem, video producers have been using the unique safety advantages of RAID-0, RAID-1 and RAID-5 to either speed up or back up their footage files. On one hand, RAID-1 allows a person to mirror files between two drives, giving a video producer peace of mind in the case that a hard drive crashes. On the other hand, RAID-0 utilizes the speed of both drives by reading and writing from both disks at the same time, using a method called striping. While neither method of storing data is perfect for every situation, hard drive manufacturers all around the world are beginning to notice the demand for high-end disk arrays that can utilize some type of RAID array. As a result, many hard drive manufacturers such as Verbatim have introduced RAID products in an attempt to improve the offerings in this market. 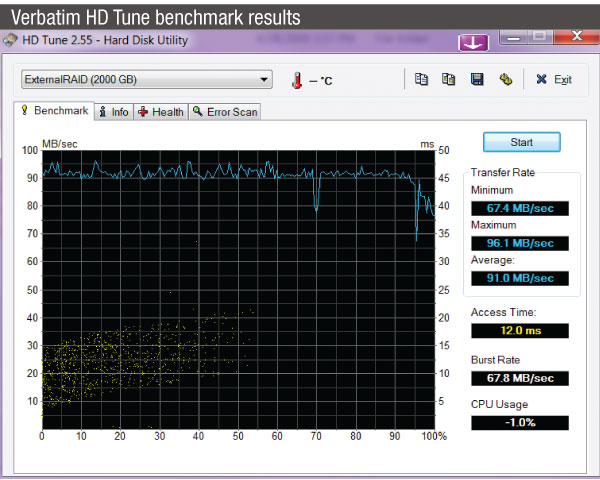 With its 2-terabyte external RAID drive, Verbatim has finally completed its extensive desktop hard drive offering. As this is Verbatim’s first attempt at an external RAID drive, we were quite interested to see how Verbatim’s hard drive unit held up to the intense competition. Upon opening the package, we found the Verbatim 2TB RAID drive, along with a 2-foot eSATA cable, a 2-foot USB cable and a power adaptor. However, we immediately found both cables to be too short, limiting a person’s freedom in choosing where to place the drive. On the other hand, we found the device to have a small yet stylish black rounded case, along with a silent fan in the back to keep it cool during operation. Looking at the backside, the drive has two options for getting data to your desktop or laptop, using either a 3Gb/s eSATA cable or USB 2.0, which delivers data at 480Mbit/s. There is also a switch on the back for putting the external hard drive into a RAID-0, RAID-1 or BIG configuration.

The BIG configuration is Verbatim’s solution to giving users more formatted drive space (1.81TB), while still keeping and utilizing the speed of both drives. In this configuration, the RAID controller inside the unit will write data to one disk, then, when that disk gets full, it will write to the free drive in order to speed up file transfer rates. Switching from this to other RAID modes on the back of the drive meant turning off the drive and then plugging it back into the computer after a new choice was made. Unfortunately, this couldn’t be done without sacrificing the content on the hard drive, so backing up data from the drive was necessary. In the RAID-0 mode, we found the formatted size of the drive to be 1.81TB, while the RAID-1 gave us 931GB. This is due to the fact that in RAID-0 mode, the RAID controller writes data simultaneously to both drives, while in RAID-1 mode the controller writes the same data to both drives in order to protect data in case of a hard drive failure.

We also found that the drive ran very quietly, with a noise level of less than 25dBa. When any unnecessary noise can affect how well a person can hear frequencies from the speakers, this becomes very important when doing any audio editing The drive also ran quite cool, thanks to its 40mm fan on the back, making prolonged use possible without overheating. Verbatim was also kind enough to include Nero’s BackIT UP 2 software, along with a Smart Disk FAT32 format utility, in order to easily create a FAT32 partition on the drive. This is useful for making the 2TB drive compatible across all operating systems, including a Mac. With these features, Verbatim has been able to successfully differentiate its 2TB hard drive from the rest of its desktop hard drive line. 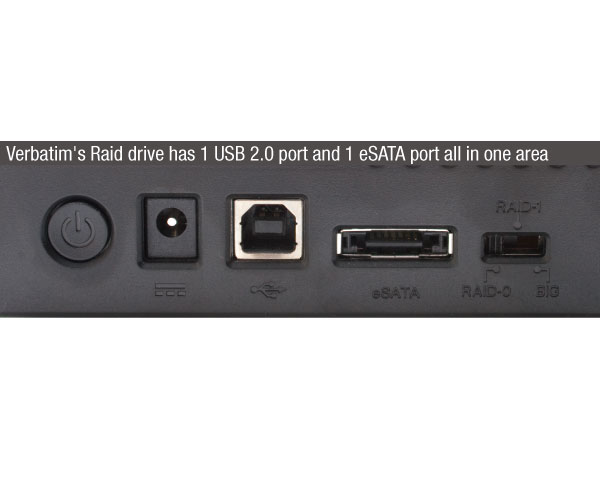 When it comes right down to it, the most important feature that will separate a quality drive from a bad one is its speed. In this regard, we found that, even though Verbatim is relatively new to the external RAID hard drive market, its drives performed like seasoned pros.

We tested the hard drive in RAID-0 mode running on a Toshiba Qosmio X505 with 6GB of RAM, an Intel Core i7 CPU and the Windows 7 64-bit edition, which gave us the fastest possible speeds to work with. While hooked up to our eSATA ports, we found that the average transfer rate was 91MB/s, it used a mere 1 percent of our CPU, and it had an access time of 12ms, which is on the fast end of similar drives on the market today. Naturally, when using our USB 2.0, we found the speeds to be slower than our test with eSATA. Even so, with an average transfer rate of 26.8MB/s, 1 percent CPU usage and 12.4ms access time, the drive performed as well as any drive of its kind on the market.

When purchasing an external hard drive, the most important features that professionals look to are price and quality. In this regard, we put Verbatim’s drive through its paces by editing our video tutorials on it for more than a month. After seeing the results, we were more than satisfied that this drive can function well under any editing situation. As a result, with its excellent price point and superb speeds, the Verbatim RAID 2TB is a great option for anyone looking for an inexpensive way to keep files safe.

A fast hard drive that will keep data safe in a quiet and sleek design.