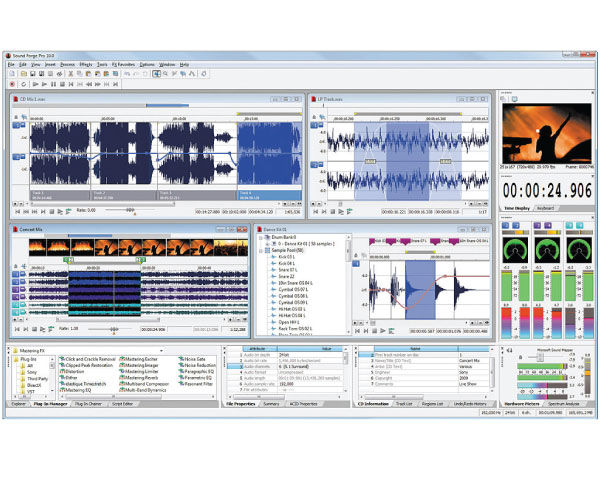 What family of video editing tools are you most comfortable with? There’s Avid, with its extensive legacy in broadcast and film. Or Adobe, with its ever-more-tightly integrated Creative Suite, from imaging to video to the web. And Apple, with its Final Cut Studio expanding from professional editing to digital cinema.

And then there’s Sony Creative Software, with a legacy based in audio from the acquisition of Sonic Foundry back in 2003. Instead of a collection of tools combined into an integrated suite, Sony has a small family of professional products that run on Windows, featuring Vegas Pro for video, plus two powerful audio tools that are suites in their own right: Sound Forge Pro for audio editing and mastering, and ACID Pro for music creation.

And it fully supports working with multichannel audio, including editing down to the sample level. 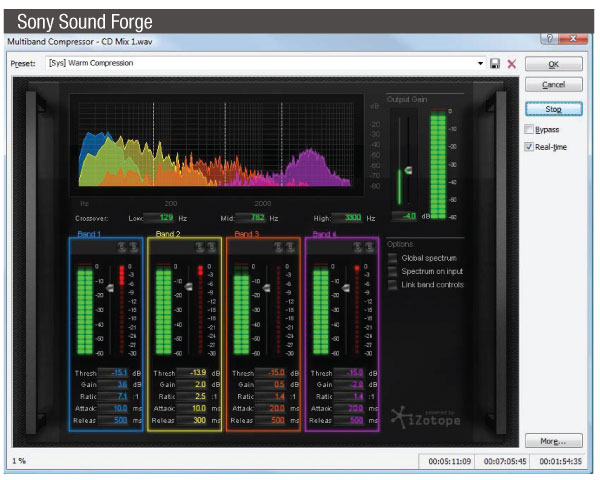 The Sound Forge Pro interface is deceptively simple, until you dig in to the vast array of toolbars and processing options in the menus.

Each new audio file opens in its own data window, with extensive tools available to view and analyze the sound, including custom colors, channel meters, statistics, and a spectrum analysis window. It now also supports viewing and editing the metadata associated with audio files.

You can do basic cut and paste / drag and drop editing directly in the window, and more with the toolbars, and then turn to the menus to apply further processing: Insert synthesized sounds, Process clip formats (e.g., depth, EQ, normalize, resample), clean with Tools (noise reduction, click and crackle, restoration), and apply Effects (delay, reverb, pitch). The Plug-In Manager tool also organizes other non-Sony plug-ins under the FX Favorites menu.

Just as one example of the depth of the interface, you can now set the default fade types as a global option (wet/dry mix and fade in/out curves). You typically then apply fades to individual clips using a dialog that offers gradual and exponential presets or manually drawn curves – but each Process and Effect dialog also includes options to also apply various fades and gains.

Sony provides a plethora of effects with Sound Forge Pro, with over 40 professional studio effects and processes, which include some 200 predesigned presets for common uses. You can automate effects including Volume, Delay, and Chorus, and use the Plug-In Chainer to link up to 32 DirectX and VST plug-ins into a single processing chain that can be previewed in real time – and saved as a preset.

Sony, with its Sonic Foundry heritage, is focusing on creating powerful individual tools for specific types of professional needs, and particularly in audio. ACID Pro, then, is for music creation – composing, recording, mixing, and arranging audio and MIDI tracks.