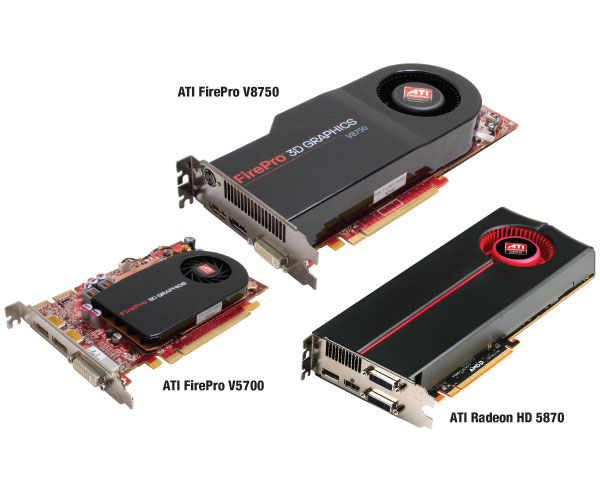 Commonly, when one thinks of building an editing computer, a nice workstation card like an ATI FirePro comes to mind. Not everyone knows when a workstation video card is needed and when a regular gaming video card would work just as well. Let’s take a look at some of the differences between a gaming card and a workstation card.

Three ATI video cards were tested on a Polywell x5800A running Windows 7 with an Intel Core i7 965 (4 x 3.2GHz) processor with 6GB of RAM. Detailed specifications of this unit can be found in our article on the Polywell x5800A. The Radeon HD 5870 is currently one of ATI’s best gaming video cards while the FirePro 8750 is ATI’s best workstation card. The FirePro V5700 is ATI’s midrange workstation card. As seen in the detailed specifications, each card is very different and provides a good basis for comparison without having to benchmark all of ATI’s video cards.

It is noteworthy that ATI sells the FirePro V8700 at a much lower price than the V8750, with the only difference being less video RAM. Less video RAM means slower performance at higher resolutions. Since the average user wouldn’t work on projects over 1080P, the V8700 is all most people will need.

SpecViewPerf10 is a free benchmark utility that tests real-time performance inside programs like Maya and 3D Studio Max. The test rotates the view around 3D objects and records the frame rate. A faster frame rate results in a smoother experience for the user while creating and moving 3D models. Without a fast workstation card, complex 3D objects can bring the modeling program to a crawl. As seen in benchmarks, if you are going to do 3D modeling a FirePro video card is a must. The FirePro V5700 is a great fit for those who want to do 3D modeling and special effects on a budget.

3DMark Vantage was used to test video game performance. It runs multiple video game demos and records the frames per second (FPS). The FPS is then used as the basis for a numerical score. By default, it can be assumed the Radeon HD 5870 is going to win the gaming benchmark. The FirePro V5700 is not within acceptable frames per second to play a new video game but the FirePro V8750 can handle new games without a problem. For those looking to play some games on their computer and do 3D renderings the FirePro V8750 is a good way to go.

As seen in the benchmarks, the time it takes to encode video doesn’t change much with any of the video cards. Currently, Adobe doesn’t offer any video card acceleration for their product. There are plug-ins available to boost performance inside Adobe Media Encoder, but otherwise, a fast video card will yield little benefit. Adobe’s Mercury Playback Engine will solve some of these issues.

ATI is developing a plug-in for Adobe Media Encoder CS4 that allows the card to be used for video encoding acceleration. The plug-in is still in beta and is only available for Windows Vista computers running both an AMD processor and an ATI video card. One of the best attributes of this plug-in is it will work with an ATI gaming video card or a FirePro/FireGl video card. Once this plugin is finished, a cheap ATI card will provide better encoding performance without breaking the bank.

Keep in mind there are a lot more differences between the two video card lines besides just benchmark speeds. Some workstation cards have Stereo 3D output to allow use of 3D glasses. Workstation class video cards offer better support for 30-bit color and some specialize with 40-bit to 64-bit color. More colors allow for more realistic images and video. ATI also boasts better support for its workstation class. There’s a multitude of other special features that are added and a full list is available at www.amd.com

What should I buy?

What you buy depends on what the computer’s intended use is. If the computer is just going to be used for gaming the obvious choice is a gaming video card. For 3D modeling any FirePro card will work great. For a gaming/modeling computer the higher end FirePro cards are a better choice.

If the computer is just going to be used for Adobe CS4 then no expensive video card is needed. For those using other video editing programs like Avid or Sony Vegas, there is little bonus to buying an expensive video card as well. ATI has a large selection of available video cards for whatever your needs.

As of the date of this review, only Adobe After Effects in Production Premium CS4 supports video card acceleration. There is not a need to buy an expensive workstation video card for Adobe Production Premium CS4. However, Adobe has publicly announced that upcoming versions of Premiere Pro will include a new video playback engine but for now, it will only support a few video cards with plans to add additional support in the future. 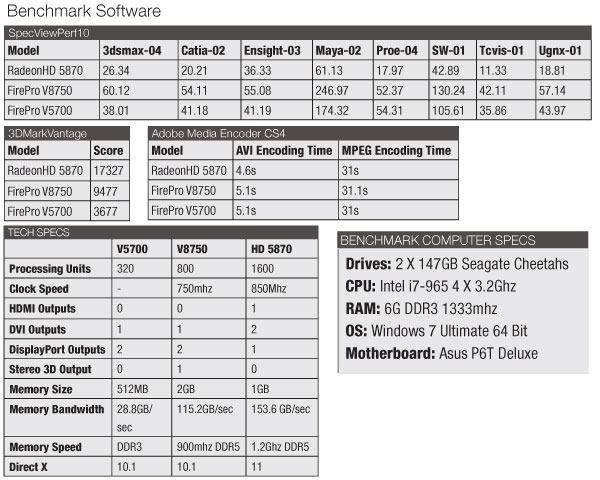 Click on this image for an up close look at the Benchmark Software, Computer and Tech Specs.