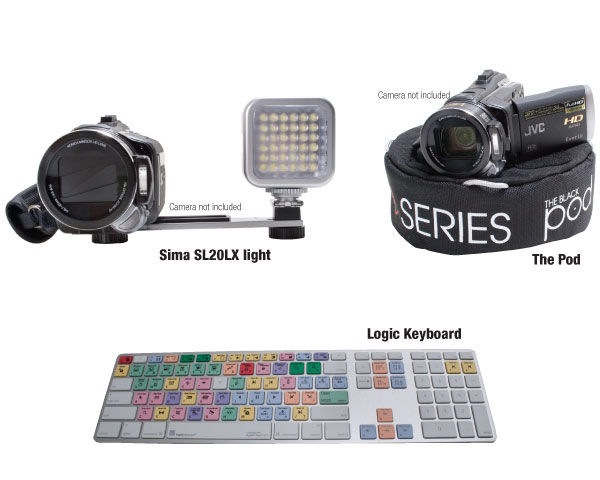 Accessories are the driving force in many of today’s growing markets for products like the iPod or home gaming systems. And in the case of these three – an LED camera assist light, Logic keyboard for editors, and soft, alternative camera mount – they can be of great help to any photographer or editor.

The first of these accessories is an ultra-bright LED camera assist light by Sima. Weighing less than a quarter-pound and measuring approximately 2″ wide by 2″ deep, the SL-20LX is lightweight and portable, and it easily fits in the palm of one’s hand. Even at that size, though, it packs a punch with its projection.

The SL-20LX’s packaging boldly proclaimed that it was “50X brighter than standard bulbs,” which we put to the test in a moderately-sized room at night. We attached a Panasonic Lumix DMC-LZ8 camera to the bracket, along with the light, and we shot both still pictures and video – with and without flash assist. At a distance of about 20 feet, the light held up and the shots came back nicely. However, in some cases, such as extreme closeup, the powerful light shining on the subject of our shots came in too bright. And with no adjustable settings for the LED’s brightness, it proved detrimental for some uses.

The light supports the inclusion of up to two additional lights through an interlocking design. Slide an extra light into each side of the Sima LED, and it will be possible to have a long horizontal row of extra lights.

The light uses LED technology, which doesn’t give off much heat. Even after extended use, touching its exterior is comfortable, and it doesn’t burn in the slightest.

A Solid Foundation: The Pod

The second item in our bag of tricks is The Pod, a beanbag camera mount meant to serve as an alternative to the tripod. The Pod is a black, circular mount with a 1/4″ universal camera bolt at its center and four strap-loops to support what is attached to it. Made of ballistic nylon, it weighs just shy of 2.5 pounds and measures 7.5″ wide by 3″ thick. It supports a maximum weight of about 220 pounds.

The Pod is specifically designed for photography involving closeups, low light, self-portraits and long lens zooming. Once the camera has been attached, the base can be set on any number of odd surfaces, like a rock or an uneven surface with other objects on it. The Pod’s plush-like design then molds around what it’s sitting on to accommodate its shape.

We tested the product’s versatility by attaching a point-and-shoot digital camera to it, and later, an old Quasar Digital EIS camera from the 1990s. The Pod performed well under both weights – one pound and five pounds, respectively. It also adjusted nicely to being placed on the handle of a chair, sprinkler top and tabletop covered with seashells. The camera swiveled and turned nicely during both indoor and outdoor tests.

One tradeoff – or downside, depending on your needs – is that it obviously can’t be set up the same way a tripod can. For situations when the camera needs to be high above the subject, the design makes the user hunt for an object already situated high above the ground. It isn’t foolproof either, which is evident, because it can fall if improperly placed.

The keyboard itself is a variant of the slim, modern Apple keyboards. But the keys are color-coded and bound to a shortcut, like roll edit, superimpose or match frame. Hit any of the buttons, and commands that would normally be more time-consuming can be executed much faster.

The device is plug-and-play and works from the get-go. The Logic is capable of working on Windows-based computers because it uses USB. However, during testing, we found that some programs, like Windows Movie Maker, were not supported. (Test computers: Gateway T-Series laptop, custom-built PC with dual-core CPU.)

The feel of the keyboard is really not that different from the basic Mac. If you like the slim design, you’ll probably feel right at home with this one. The color-coding may be distracting for normal typing, but the feeling goes away with time and practice.

Ultimately, all of these products build on familiar ground and are simple in their use. What makes them worthwhile is that they make subtle improvements on existing items. For instance, The Pod is really just a fancy beanbag – photographers have been using this trick for years – but The Pod is better because it has the centered universal mount.

The same is true for the LED light; attach a light to a camera and you have extra light. But attach this LED to one, and you’ll end up with a nearly overwhelming amount of it.

And yes, the Logic Keyboard is an improvement because it evolved as the Mac evolved.

These items are each useful in their own right. The downside is that they each fill a highly specific role and sacrifice conventional use to achieve their “alternative” status.

A handy accessory to have. You won’t need three, though.

Great to have when a different feel is desired.

Great for learning on and handy for experienced editors.

Evan Burt is a journalist and published author writing in Northern California.