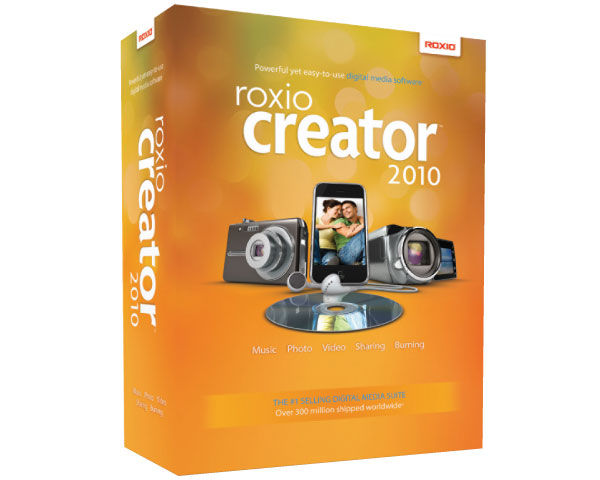 Roxio Creator 2010 almost overwhelms with the plethora of tasks one can perform from the application’s Home Page. You will find short cuts to specific tasks in the main portion of the page, while the left margin provides categorized links to pages listing additional options. Frequently-accessed tasks are found across the top of each page, with a complete listing of available tasks below. 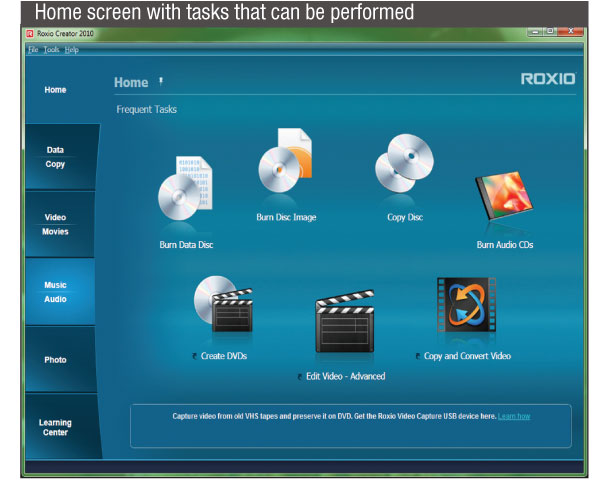 Among the choices are the familiar burn, backup, copy and label options. Ripping, burning, converting and transferring sound like scenes from a bad horror movie but actually make up the Music and Audio offerings. The user can accomplish all sorts of photo related tasks including the creation of panoramas and slide shows. A great new feature is the Learning Center containing a number of video tutorials as well as step-by-step PDF files on how to get the most out of the Creator 2010 application.

Among its new features are a handy-dandy drag, drop and burn widget that lets you easily burn and copy files right on your desktop. This latest version also offers improved capabilities that allow you to convert video files to play on your mobile phone, iPod or other portable device. Like its predecessor, Roxio Creator 2010 lets you record to either single-layer or dual-layer Blu-ray Discs. You can even burn large projects across multiple discs and protect the content using disc encryption. 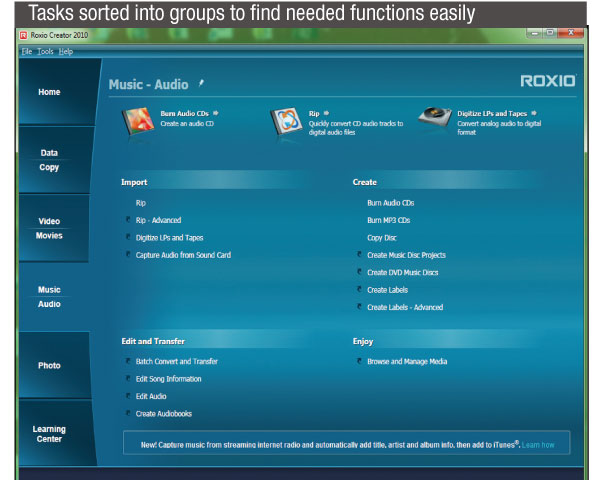 Saving time is always a good thing, and now you can capture an entire camera worth of HD video directly to DVD or Blu-ray Disc without first having to save it to your computer’s hard drive. Also new is a smart encoding feature that re-encodes only the parts of your video that you have changed. The result is a much faster encoding process.

The suite sports a versatile set of video editing tools. The CineMagic Movie Wizard takes your raw video and song selection and automatically generates a very acceptable production complete with video intro and transitions cut to the beat of the music. For the more ambitious movie editors among us, Creator 2010 sports a 32-track timeline editor with plenty of options for adding background audio, video, text and overlay effects, plus a host of transitions and transition themes.

Once you have edited your masterpiece and are ready to share it with the world, you have a rather healthy DVD authoring program at your disposal. With the ability to change menu and button styles, menu backgrounds and audio, and even add submenus, you can create very impressive DVDs to share with your family and friends. Creator 2010 also gives you advanced authoring features such as motion menus, menu-to-menu transitions, and animated buttons.

True to its goal of reaching the consumer video market, Roxio Creator 2010 has succeeded in providing its users with a comprehensive media management and manipulation tool. This digital media suite is impressive to be sure, and offers more than enough options to satisfy the creative output of all but the most serious professionals.