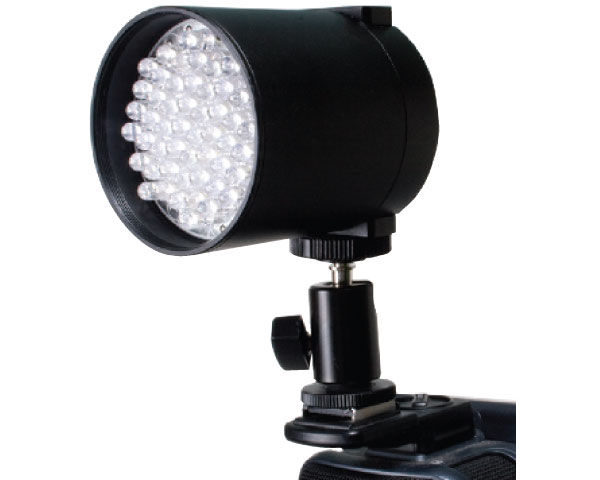 Video production is growing into a more obtainable pastime by the day, with easily-accessible how-tos online and affordable consumer-grade cameras flooding the market. Taking the next step with proper lighting, however, can be difficult, both due to cost and availability. Switronix has taken notice, creating its TL-50 TorchLED, a highly versatile on-camera light with a sweet price point.

Aside from the light itself, the TL-50 comes packed with 3 plastic gels (orange, clear, and frosted) and a wall charger. The gels are durable and easy enough to use, simply snap one over the LEDs. These gels can act as light diffusers or change the light temperature of a shot.

The TL-50 is encased in a strong aluminum alloy casing which, despite the unit’s light weight, gives it a good, durable feel. The back of the unit is home to a simple on/off knob which doubles as a light intensity controller. You can adjust the power level anywhere from 0 to 10, and it’s a nice way to cut back on battery usage when you don’t need full juice. Also on the back of the unit is a three-stage battery level indicator and a plug-in jack for the included charger. 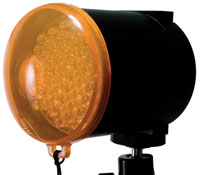 Being an LED light, the TL-50 puts out very little heat. This means it stays pretty much danger-free as far as touch goes, and you can handle it without worry even after hours of usage. Combine this with the unit’s light weight and small size (it can rest comfortably in the palm of your hand), and you’ll find that you will barely notice it when traveling to shoots. There are two 1/4-20 threaded holes on the TorchLED, one on top and one on bottom. Using a simple shoe mount, you can connect it to plenty of different mounting devices to suit your needs.

The TL-50 projects a 5600 Kelvin color temperature. The temperature of your light can affect the colors of the video that you shoot. The 5600K color temperature is the same as sunlight, making this a versatile light for either matching outdoor light or to use as a fill light when actually shooting outdoors. You will probably use the 3200 K gel indoors (under tungsten lighting) quite often to soften your shots, There’s also a 3600K gel included as well. It’s good to have both of the gels on hand, and it takes less than a second to put them in place. 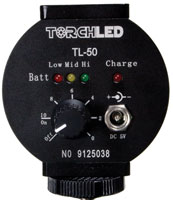 One impressive feature of this LED is the length of its battery life. The TL-50 is powered by an internal lithium-ion battery that will, at full power, last at least two and a half hours on a single charge. In our tests it actually lasted nearly forty-five minutes longer, only beginning to dim around the three-hour mark. This is especially useful if you do event shooting, where you’ll need a constant, uninterrupted flow of light for long periods at a time.

To test the TL-50 we set up the light at various distances in a darkened room. We found it to provide a nice, even fill from as far as 15 to 20 feet away. There was a little bit of glare, but using the gels to diffuse the light solved that.

Switronix has done a good job in producing a quality on-camera light that can suit any occasion. It’s well-made enough for professionals to take notice, while still remaining very compact and safe for amateurs as well. The best part is the price point: the TL-50 goes for around $300 at the moment. Video producers know that half the battle to getting that great shot is getting all the gear you need. There’s more to shooting great video than just a good camera. Lights, tripods, mics and all the other gear can get costly and downright unobtainable. But if you’re a video producer on a budget, then this little on-camera light just might be one of your best bets to fill the void.

The TL-50 LED video light is a great on-camera light that can adapt to any situation. Its strong build and
low price make it accessible to a variety of video producers.

Arthur Lance is a film student and video editor/producer.