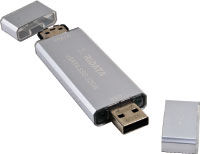 We’ve been itching to play with a solid-state drive (SSD) around here for quite some time. The technology seems promising, with traits such as running cool, having fast access to data and a lack of moving parts. RiDATA’s SSD is unique in that it’s one of the few eSATA SSDs out there. Most SSDs use the SATA interface instead. But it is even more unique in that you can also connect it to a USB port and use it like a regular ol’ flash drive (though its performance will be hobbled as a result of not being connected to an eSATA port.)

If you’re familiar with traditional hard drive technology beyond the basics, you know about the need to defragment your drives to keep performance high and to help prevent excessive wear and tear from affecting your drive. If you get an SSD, this is the first habit that you will have to unlearn (but you will still want to keep up your good defragging habits on your traditional hard drives). Defragmenting an SSD will yield no performance increase, since if a file is scattered across the disk, there’s no actuator motor that has to move around to track down the file until it is completely read. In fact, if you try to defragment an SSD, expect its life to be shortened-the reason is that the large number of write operations involved will hasten the wear on the SSD’s flash memory chips. (Any good SSD or flash drive controller includes technology called “wear leveling”, which writes data to the flash memory across all available memory cells so as to prevent unnecessarily wearing out the chips involved.)

If you’ve been paying attention to flash technology’s evolution, you know there are two basic ways that data can be stored on flash memory chips: SLC, for single-level cell, and MLC, for multi-level cell. SLC is faster and more stable than MLC, but is also more expensive. RiDATA chose MLC flash chips for the Racer. MLC chips are less expensive and can store twice as much data per chip than their SLC counterparts, and have become very popular for entry-level SSDs. SLC chips have become popular in SSDs that are designed for raw performance, but you’ll pay (in a fiduciary sense) for that performance.

Unlike many hard drives, the Racer lacks a temperature sensor. But it doesn’t really need one-heat doesn’t affect memory chips nearly as much as it affects hard drives. Besides, since this is a device that is designed to hang outside of a PC rather than being installed internally, heat is definitely less of an issue to start with.

The Racer doesn’t support native command queuing (NCQ), which is a relatively common feature in SATA hard drives. The idea with NCQ is to give the drive commands that it can perform while the main CPU is busy, to increase the performance of the entire storage subsystem. It is supported best in Windows Vista and Windows 7, though it is also supported in most modern Unix-based operating systems, such as Linux, FreeBSD/OpenBSD/NetBSD and Solaris.

We connected the Racer to a Polywell Core i7-based system, using the provided USB power cable. (The USB power cable is necessary for plugging the drive into a desktop system that does not include a powered eSATA port. however, you must use the supplied cable to avoid damaging the drive.) To get some baseline numbers, we also benchmarked the Seagate Cheetah 15K.5 drives configured as a 279.8GB stripe set and attached to the onboard Marvell 88SE6320 SAS controller, as well as the Seagate Barracuda 7200.11 1-terabyte hard drive attached to the system’s Intel ICH10R controller.

We present the numbers in tabular format below. Let’s talk about some of the standout numbers:

Using Blackmagic Design’s Disk Speed Test utility, the drive tested at the unbelievably fast speed (that is to say, a speed that we cannot possibly believe) of 997.2MB/sec for reads and a much more credible speed of 50.3MB/sec for writes. At that speed, the most bandwidth-intensive thing you’d want to do would be a single stream of uncompressed NTSC video; though you could do up to two simultaneous streams of uncompressed 8-bit 4:2:2 YUV video (it would be able to do up to 75fps.) We would be a bit leery to write uncompressed video streams to the Racer, but we wouldn’t see any major issues in writing compressed video in the form of DV, HDV, AVCHD, etc. Once your video landed on the Racer, though, your playouts should always be smooth.

While SSD technology is still in its infancy (and expensive), if your storage needs would be well-suited by SSD technology, there it is. The great part is that prices will only go down with time, as more flash memory comes onto the market (which we fully expect will be the case.)

A good performer, if a bit pricey for the capacity. But expect prices to keep coming down.