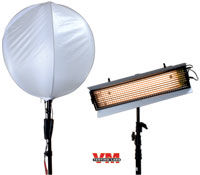 For years, lighting equipment has been evolving and improving to meet the growing needs of videographers and photographers. Unfortunately, with increased versatility and durability also comes an increased price tag. The Evolved Lighting System by Gyoury hopes to give videographers the ultimate in lighting versatility without the hefty price.

The manufacturer sent us a variety of lights and products to try out. Opening the hard plastic case ($350) revealed a pair of fluorescent banks – one dimming ($975) and one non-dimming ($792) – mounted to sturdy plastic board via a ball mount. Under the board were a number of accessories and adaptors.

First, let’s look at the light banks. The 110V AC electronic flicker-free ballast mounts to a 23″ reflector complete with barn doors and removable mirror finish. The ballast powers two 55-watt (250-watt equivalent) fluorescent light wands with a color temperature of 3200k (indoor) or 5600k (outdoor). The light wands easily clip into the reflector and release easily as well. The benefit of using fluorescent light is a drastic reduction in power consumption and a very low heat output, which allows the user to safely handle the bare light tubes without the risk of being burned or causing damage to the light itself. The ballast with the dimmer option allows the user to dim the light output from 100% all the way down to 1% without color temperature change, making the light bank extremely flexible. The light bank mounts via the ball joint at the back of the ballast, using one of the many mounting options the Evolved Lighting system offers.

The lantern kit ($280) consists of a metal tube, four flexible frame bars not unlike those used in softboxes and a thin white diffusion material which is made of 1/4-inch grid cloth. The lantern assembles easily, making what looks like a large white Chinese lantern. Two light wands (either borrowed from your main kit, or purchased separately for $48 each) mount inside the lantern and require the use of the extension cords provided. Now here’s the cool part: the lantern mounts to any standard painter’s pole (not included). By running the extension cord down the painter’s pole and plugging into the ballast, which mounts to the end of the painter’s pole via spring-loaded clips, we now have a soft, even light globe which can be extended up to 12 feet. The lantern is perfect for documentary work when your subject needs to be mobile or is in a public place.

Because the fluorescent banks draw much less power than tungsten light, you can plug the lantern into a 30-volt battery belt (also not included) and run for up to one hour and 45 minutes. The downside, of course, is now you have to go drop $1200 on a battery belt. Ouch!

The mounting board mounts two light banks. In addition to keeping the lights snug in the carrying case, the mounting board can also work as a stand. You can lean it against a wall, prop it in a window sill or just lay it flat on the ground. Thanks to the universal ball joints, you can adjust the lights to almost any angle.

Moving on, we come to the Monster Mount ($190). This 39″ steel pole, equipped with four ball mounts, is capable of holding up to four Gyoury light banks. The Monster Mount attaches to any light stand capable of holding up to 30 pounds. The purpose of the Monster Mount is to give the user the option of having a large light source mounted to just one light stand. Perfect for lighting a set where you need lots of light and you have limited space. The ball mounts allow complete directional control over the light banks.

The next accessory, the drop ceiling mount ($39), is one of my personal favorites. Basically, it’s just a ball mount with an attached clamp that lets you mount a fluorescent bank directly to a drop ceiling. Since the banks weigh only six pounds, the drop ceiling frame easily holds the weight. Now you have a nice, even overhead light that is fully controllable without need for an expensive boom stand. I think every videographer has needed this little gem at one time or another.

Finally, I wanted to mention another handy accessory, the Flexi Mount (which was formerly called the Visor Mount, $75). The Flexi Mount is specifically designed for mounting a light wand to the sun visor in a vehicle. Now I know what you’re thinking: “How often do I need a light inside the vehicle?” This was my first thought too, but, besides the obvious filmmaker shooting a car scene, think of documentaries when the subject is being interviewed in the car or that scene on Cheaters when the host is getting ready to confront someone. It could even be as simple as lighting up the car to get footage of the family road trip. You can easily run one or two lights off a DC power converter plugged right into the cigarette lighter. Overall, the Flexi Mount is a very handy little accessory.

The Evolved Lighting System by Gyoury also has a variety of other accessories that work to make this lighting system very adaptable and convenient.

After a few hours of hands-on testing, it’s easy to see that Gyoury designers had the needs of videographers and filmmakers in mind when they designed the Evolved Lighting System. With enough accessories and mounting options to meet almost any lighting need and adapt to virtually any environment, along with the added benefits of using fluorescent light, it’s hard to look anywhere else. However, the price tag can quickly add up and there are more affordable (albeit less convenient) options out there.

The Evolved Lighting System does a fantastic job of providing high-quality lighting units that will adapt to virtually any environment and satisfy even the most demanding lighting needs.