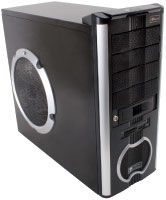 Polywell has just put together a video editor’s dream machine with the new NVIDIA Quadro CX. The computer is running Windows Vista Ultimate 64-bit SP1. For those of you who don’t like Vista, Polywell does offer many different OS installation options including Windows XP and Linux. The system came pre-installed with the Premiere Pro bundle and fairly up-to-date drivers. This system is ready for video editing.

The X5800A-CX4 is made with only quality components. The case is thick metal with a nice black finish. On the side of the case is a 220mm fan with a directional control switch. Things are very neat inside the case, with all cables zip-tied out of the way. There are a few case options available with various fan sizes on Polywell’s website. The computer has a 750 watt Nspire power supply with a large 120mm fan. Overall, the unit is rather quiet-the only sound you really hear are the two 15k rpm Seagate Cheetah drives. The motherboard is an Asus P6T Deluxe with lots of onboard features: SAS, 6 DDR3 RAM sockets, 7.1-channel Audio, 2 gigabit LAN ports, 11 USB ports, and FireWire. Plugged into the board is the current processor speed leader, the quad-core Intel i7 965 Extreme. Three of the DDR3 sockets are filled with 2GB DDR3-1333 sticks making a total of 6GB, addressed as tri-channel. To top it off the unit comes with the Quadro CX card, the must-have for video editing. For those of you wanting to break into Blu-ray Disc, there is an LG Super Multi Blue drive and a secondary DVD burner. This unit also boasts a removable SATA 1TB hard drive, multiple memory card readers, and front/back eSATA ports.

The first thing one will notice with this machine is its long boot time, most likely due to all the onboard devices and RAID. The first check was the hard drive performance speed. With two 15k rpm Seagate Cheetah hard drives in RAID 0, HD Tune showed an average read of 168MB/s and an access time of around 5ms. With this kind of throughput, other systems will be left in the dust while accessing and editing video. In comparison a standard drive will get around 90MB/s and have an access time near 15ms. The Cheetahs in RAID 0 also beat out solid state drives that have maximum read speeds near 150MB/s.

After running a few performance benchmarks in SiSoftware Sandra, it was surprising to note that the NVIDIA Quadro CX has a GPU/memory rating near an NVIDIA GeForce 9800GTX. When testing using Futuremark’s 3DMark Vantage 1.01 with performance settings, the graphics card attained a score of 7646, which is similar to the GeForce 9600GT. If you just want to play games, then some of NVIDIA’s gaming cards might be a better choice. The biggest feature offered by the CX card, however, is its ability to do things that the CPU normally does. With the 3DMark Vantage CPU benchmark test, the computer pulled in a rating of 43307. To put things in perspective, the highest CPU rating according to 3DMark’s web database is 29256 from a Core i7-965 Extreme over-clocked to 4.0GHz.

When testing H.264 encoding times out of Premiere Pro, using ETI RapiHD at 1080p, the encoding speed with a 4 minute video was 7x real time. This is almost double the speed of the iBUYPOWER system we previously tested with the Quadro CX. In Photoshop CS4, the Quadro CX allows larger images to be quickly scaled and edited without the familiar wait time. The Quadro CX also accelerates many features in Adobe AfterEffects, which is not included with this system. For more information on the Quadro CX you can read the full review here.

The Windows Experience Index base score was 5.9, which is the fastest score that the Windows System Assessment Tool will issue. The only piece in this system that is not top of the line is the memory, DDR3-2000 being the fastest out at the moment. The memory clocks in at 13567MB/s read and 8998 MB/s write. In comparison, dual-channel DDR-400 clocks in around 5400MB/s read and 1750MB/s write. The Intel 965 Extreme i7 processor in this system shows up as 8 threads with the quad-core hyper-threaded architecture. The processor is known for its ability to over-clock with a max speed of 5.6GHz being attained. Without fancy cooling, speeds of around 4.0GHz have been attained. No over-clocking of the system was attempted, but the motherboard has many tweaks available for upping the speed. Overall this system is going to be a top performer for video editing even without over-clocking.

If you’ve got the cash and you want to edit, this machine can do it all. This is by far the fastest computer we have seen yet. Realistically, you could do the same job with a much cheaper computer, but it’s a matter of time over money. Think it’s over-priced? If you built this system yourself you wouldn’t really save much, and then you wouldn’t have a parts and labor warranty. The graphics card itself has an MSRP of $1999, near $1000 in software, and a $1000 CPU. Even if this system isn’t in your budget Polywell offers a wide range of other systems.

This system is top of the line, meaning it doesn’t come cheaply, but it is not over-priced for the components it comes with. It is well-built and out of the box it is ready for video editing. The system supports a variety of media devices so whatever you use to record video, this system should support it. The manufacturer also offers many different configurations to help you get what you want.