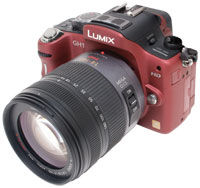 The onslaught of DSLR video cameras has brought new words to our vocabulary as video producers; Lens Systems, Intelligent ISO and Live View are some of the important ones. Together, these offer video producers some very interesting options when it comes time to buy a new camcorder. While the Lumix GH1 compact DSLR does offer great video capabilities in 1080/24p and 720/60p video modes, the most remarkable feature is its Micro Four Thirds Lens System. This system of removable lenses allows the use of many different lenses for creative shots and doles out excitement to beginners and pros alike. But the Lumix GH1 isn’t quite a camcorder replacement. For the pros, it’s a specialty tool to be used alongside a camcorder, and for the beginners out there, the GH1 fills almost every need. There’s no DSLR Kool-Aid to drink here; the Lumix GH1 is simply a fun camcorder. 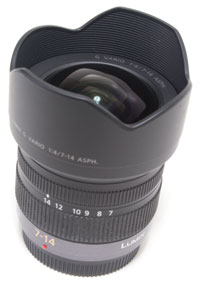 Opening up the GH1, we’re happy to find a camera with solid build quality. It has a good weight for its size, and all of the buttons and dials feel well made. We quickly notice the Movie icon on the main dial atop the GH1, and move it into position with a nice “click.” The GH1’s thin, flip-out LCD screen moves fluidly and rotates without feeling flimsy. This is a good indication of how well the screen will hold up, since we’ll want use it for off-angle shooting. Our Lumix GH1 DSLR camera kit includes two Lumix Vario G lenses, a battery, camera strap and video cables. Missing from the kit is an SDHC card, which the camera uses for recording video and photos. Luckily we’re able to borrow a 2GB SDHC card from a nearby friend for our testing. Phew! The stock 14-80mm OIS (Optical Image Stabilization) lens comes attached to the camera. The second lens is a specialty lens, a 7-14mm Aspherical wide-angle. Well, “super-wide-angle” may be a better description, due to its ability to make even the smallest room look large and spacious. Lenses aside, we can’t help but notice the silver grill of the built-in stereo mic,

Using the GH1 DSLR for Video

The Lumix GH1 is a photography camera, remember? It just happens to be one that shoots HD video in many flavors. First, there’s AVCHD, not so much a newcomer to camcorders but definitely new to DSLRS. In this highly-compressed video mode, 1080×1920 video and 1280×720 video can be had. Each of these has its own advantages; record in 1080 mode for the highest resolution and a film-like 24 frames-per-second; use the 720 mode for the smoothest video with the fewest motion artifacts (those pesky blocks that sometimes appear in moving shots). The GH1 also allows us to shoot HD video in MJPEG video mode. Using this mode takes up more space on our SDHC memory card, but the video plays back smoothly even on older computers. We made a handful of test shots using the AVCHD 1080/ 24p mode. Our video is sharp, with colors that pop and motion that resembles the movies at the local cinema. Since the imaging sensor in the GH1 is much larger than a typical camcorder’s, it’s easy for us to get selective focus in our video. It’s also easy to accidentally make video that’s all blurry. We twist the focus to make our subject sharp, while the green-treed background falls smoothly out of focus. It is the Micro Four Thirds camera system that makes this possible. With lenses and a sensor made to work together, creative focus is very easy. However, we had a little trouble keeping the GH1 stable while focusing handheld. We know not all of our readers are fans of 24p video, so we shoot a host of buttery-smooth 60p video as well. Using the 720p mode, we can make video as we are traditionally used to seeing it, smooth and realistic. In each mode, we were able to control exposure using full-manual controls. This is a standout feature in the world of DSLR video, as many others allow only some control. We freely adjust the f-stop and shutter speed to get the best exposure indoors and out. Manual white balance is also available when shooting AVCHD; a “must-have” feature for any respectable Videomaker reader. The GH1 brings us ISO controls, a feature not usually found in camcorders. This allows us to change the amount of light the camera can absorb in “low light” shooting conditions. Oh, “What about audio”, you ask? The GH1 comes with a built-in stereo mic which does a good job. We recorded audio near a road and had our subject speak at a normal volume. Since the mic captures sound in a broad way, road noises crept into our video. However, this is typical of compact camcorders and nothing to frown about. Lumix makes a directional shotgun mic specifically for the GH1, which is sold separately.

With multiple AVCHD video modes, microphone jack and LCD screen that looks taken from a $40,000 Varicam, the Lumix GH1 has all the makings of a fine camcorder. The video has an amazingly filmic quality to it, and the audio is on par with other camcorders we’ve tested in this price range. If you don’t have a use for the 7mm Vario G lens, cut your bill in half (almost) and go with the basic Lumix GH1 DSLR camera and lens. Just be careful when switching lenses in dusty environments, because, as the saying goes, “With great power comes great responsibility.”

The Lumix GH1 is fun to use and creates great HD video that rivals pro camcorders costing twice as much.

Contributing Editor Andrew Burke is an independent producer who has shot video on many continents around the world.