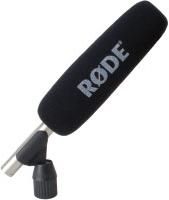 The Shotgun Microphone from Down Under

Sound. It’s just as important, if not more important, than picture. That axiom has been true since the advent of talkies and the end of film’s silent age. Many video enthusiasts tend to focus solely on the camera technology as it advances at breakneck speed. But when it’s time to put my money down, I feel much more comfortable purchasing a good piece of audio gear, knowing its lifespan will likely outlast several camcorders.

A shotgun mic is one of the two essential microphones (the other is the wireless lav) that should be in any video production kit. Its name originates from its likeness to the barrel of a shotgun. The long slotted tube makes the pickup pattern of the mic highly directional, meaning that it’s useful in isolating a specific sound or speaker from its environment. A common misconception is that you use shotgun mics to pick up audio from far away, similar to the telephoto setting on a camcorder. This is not the case; as with all microphones, the best placement is as close as possible to your subject. Generally, to get the best audio, you use shotgun mics in the field, at the ends of boom poles which hover just out of frame.

RODE is a well-known Australian manufacturer of microphones, whose products tend to deliver more sound than their prices might suggest. So we were eager to try out its newest shotgun model, the NTG-3.

The first thing you notice when you open up the NTG-3 is that it is stored in a matte-black, weatherproof aluminum tube. It looks a lot like a pipe-bomb actually, which means you’re definitely going to be flagged by airport security on your next shoot. However, I really appreciate the excessive ruggedness of the case. It shows both the attention by RODE to the sometimes harsh realities of the location environment and an insight into the mind of the engineers, as if they were saying, “We worked really hard on this microphone; please take good care of it.”

The microphone itself is silver, measures 10-inches long and comes in at about a third of a pound. The NTG-3 comes with a simple XLR connection in the back, with no switches, LEDs or battery compartments, which greatly simplifies operation and troubleshooting. The NTG-3 is phantom-powered, which means that your camcorder or field mixer provides the voltage for its operation via the XLR cable. This is optimal, because you never have to worry about your microphone running out of battery, but it does require equipment that supplies 48-volt phantom power (most XLR-equipped camcorders do).

As you can imagine, with a long tube filled with slots, wind noise can be a problem. The RODE NTG-3 shotgun microphone comes with a removable foam windscreen, which works well on fairly calm days, but for anything more than a light breeze, you’re still going to want to enclose the NTG-3 in a furry windscreen or blimp.

The NTG-3 is a condenser microphone; it hears much like your eardrum: a thin membrane reacts to changes in air pressure, causing a voltage fluctuation that goes to your recorder as a faint electric signal. The NTG-3 addresses the issue of moisture forming on this membrane in humid environments (condensation on the condenser?). Like water droplets on an iced drink on a hot day, condensation in the mic can adversely affect your audio. Using a technology called RF bias, RODE claims that the NTG-3 is almost completely resistant to moisture. Having shot several shows in the tropics, I found microphone condensation an issue exactly one time, but it’s a nice feature to have nonetheless.

The frequency response of the NTG-3 shotgun microphone is nice and flat (see diagram above). All microphones are more or less sensitive to certain frequencies, so what you’re looking for is a nice flat line between 80 and 1200Hz, which is the frequency of the human voice range. The flat line means the microphone is picking up frequencies equally from Barry White to a shrieking little child.

The NTG-3’s design provides a slightly broader pickup pattern than that of most shotgun mics, making the microphone angle less critical and more forgiving for boom operators. You can see this pattern on the polar response diagram above.

The signal-to-noise ratio is another important factor for you to consider when you are purchasing a microphone. Just by existing, every microphone makes some noise, even when it’s recording nothing but silence – similar to the sound your speakers make when there’s nothing playing through your stereo system. The goal of all microphone manufacturers is to minimize the amount of this noise, and the RODE NTG-3 comes in at 81db, which is very quiet indeed. We usually recommend microphones with an S/N ratio of 60-80db.

While the NTG-3 is certainly stacking up in the specs, the ultimate value of any microphone lies in its sound. The audio from the NTG-3 shotgun microphone was remarkably clear and bright, and it “popped” in the field. Sound is in the ear of the beholder, of course, but the NTG-3 sounded far better to me than I expected from a shotgun microphone at this price point.

The NTG-3 stands out as a shotgun microphone. With its combination of clear sound, impressive technical specs and reasonable price, it’s a piece of audio gear that will have a place in your kit for years to come.

Excellent performance and value in a shotgun microphone.