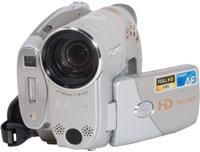 HD In a Small Can

The HR10 is part of Canon’s second generation of AVCHD camcorders attempting to deliver the DVD format for consumers. Using the AVCHD codec, the HR10 takes the next step by giving consumers HD on a DVD. DVD-recordable formats made a big impact on consumers, because of the simplicity of random access and the ability to pop what you just recorded directly into your DVD player.

Following on the heels of Canon’s HV20, which received high praise, the HR10 attempts to make its own mark on the consumer mind. The HR10’s innovative design shines in many places, but its technical breakthrough may have bled too far over into the “user-friendly department” one expects from a consumer camcorder.

Taking the HR10 out of the box, you immediately note its unique and stylish round design. It’s always nice when a camcorder that is using the latest technology looks like it. The light weight is just one of the very impressive features that we noticed right away.

The HR10 carries its battery conveniently behind the pop-out LCD screen. In the front is the built-in microphone, which records average sound quality – not bad if you’re just taping vacations or family birthdays. If you want to move on to something more professional, you are out of luck. The HR10 has no mic or headphone jack and no accessory shoe. The back side of the HR10 has a joystick for focus, exposure and an onboard light. Joysticks are always troublesome and may take time to master. During our testing, there were many times when we switched between focus and exposure by mistake. Just trying to focus was more of a hassle than we wanted. However, Canon did give the consumer a plan B.

Focus on the Good Parts

One of this camera’s major selling points is its Instant Auto Focus. Designed to snap quickly into focus, the HR10 leaves little need for manual focus for most consumer shooters. In our test, the Instant Auto Focus was very impressive. Focus from a chair about 3 inches in front of the camera to a door about 10 feet away was about two seconds. The change of focus appears to be more of a pop, instead of a gradual change.

The Canon HR10 sports several other features that we liked. The optical image stabilization (OIS) cuts down considerably on the natural jitters of holding a camcorder, and we could really see a difference with just a casual walk while recording.

To help make sure you get the best picture, Canon has given the HR10 several Scene files to help in different shooting conditions. You can select Portrait, Sports, Night, Snow, Beach, Sunset, Spotlight and Fireworks. Other video image effects include Vivid, Neutral, Low Detail and Soft Skin Detail. There are different presets for lighting conditions as well, such as Daylight, Shade, Cloudy, Tungsten, Fluorescent and Fluorescent H. You also have the option of selecting a Cine-Mode that adjusts the gamma to create a film look.

Another nice little HR10 touch is the Quick Start function, which is basically a standby button. After you turn the camera on, pressing the Quick Start will put the camera to sleep, saving all your settings. Pressing it again gets you up and going in under a second, a great feature for those who need to save battery life.

To See Is to Believe

The miracle of AVCHD is the ability to compress such a large amount of data on the 8cm DVD. During our tests, we noticed a lot of video artifacts in parts of the screen that were monochrome or had a lot of movement. These test were shot on the highest setting, XP+.

Another factor of using the DVD format is the record time. In this case, it was about 14 minutes on the highest setting. The next step down, XP, which is a standard-def setting, records about 20 minutes. When you drop down to the lowest-quality setting, LP, it records up to 33 minutes. The only way to increase record time would be to buy a dual-layer 8cm DVD, which gives almost double the record time for each setting. In addition, you have to decide before you start to shoot on a disc whether you want to record HD or SD. There is no switching back and forth on the same disc.

A Slice of AVCHD

For editing and playback, the Canon HR10 comes with two discs: the Canon Digital Video Solution Disk (for both PC & Mac) and the Corel Application Disc 1.0 (PC only), which includes Corel GuideMenu, InterVideo WinDVD SE, Ulead DVD Movie Factory SE and DVD Movie Writer SE. Both applications are adequate for home movies or simple video jobs, which are really all you should be doing with this camera.

Instant playback in a home DVD player was one of the biggest attractions of the DVD camcorder; however, with AVCHD that is no longer the case for most. Most DVD players do not have the ability to read AVCHD, so getting a new Blu-ray Disc player could be one extra cost with this camera.

Canon is definitely firing big shots with video image quality, and the HR10 is no exception. Despite some video artifacts that appear, for the most part the HR10 produces an amazing image with vivid, natural-looking colors, rich with detail. Low light is handled fairly well and, with the Instant Auto Focus and OIS, the Canon HR10 will give you an image worth its price. Unfortunately, the technology surrounding the new AVCHD codec is still taking time to develop. The short record time, limited playback on DVD players and few editing options really leave you with a narrow field to work in, but we suspect it will only improve as time goes on.

The Canon HR10 is a slick-looking camera that can shoot impressive HD images. The limited record times may be too much of a setback for most.

Jay Alexander is a professional videographer and commercial producer.