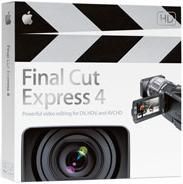 The newest incarnation of Apple’s mid-level editing tool, Final Cut Express 4, brings with it more features and likeness of Final Cut Pro than ever before. AVCHD support, multi-resolution timelines, advanced keyframing and color correction round out a long list of useful features. Some parts of Final Cut Express have gone missing. While Livetype 2.0 is still bundled with FCE, Soundtrack is no longer included.

Be sure to look into Final Cut Express 4 if you’ve mastered iMovie, or if you’ve become dizzy after reading about Final Cut Studio. Also, if you’ve been holding out on an upgrade, FCE4 should tip the scales. This version delivers more features than the last upgrade, FCE 3.5.

One feature that stands out about FCE’s design is its similarity to Apple’s flagship video editing tool, Final Cut Pro. The user interface is efficient, with small buttons for maximum work area. The drop-down menus are familiar. Button tools reside in the same places. Third party effects plug-ins can even be swapped back-and-forth. Just think of Final Cut Express 4 as a really big chip off the old block. But the similarities can be a kind of a double-edged sword; Final Cut Express 4 is very different from iMovie, especially iMovie ’08. So, there may be a bit of a learning curve involved. Luckily, FCE4 now imports iMovie ’08 projects, complete with cuts and dissolves. In the long run learning Final Cut Express 4 leaves us with the know-how to take command of a Pro-level application later on if need be.

When Final Cut Express 4 opens it takes full advantage of our widescreen LCD display. On our Apple iMac desktop computer with a widescreen 20″ display, FCE4 doesn’t waste a pixel. The user interface looks like this: Two dominant windows display video at the top of our screen; both 16:9 widescreen, and our Project Window, Timeline, and Edit tool buttons take up the bottom half of our screen.

Importing AVCHD footage into FCE4 is simple and straightforward. But we need an Intel-based Mac to do it. We connect our camcorder and navigate to Final Cut Express 4’s new Log and Transfer window. Next, we choose our camcorder in the Finder window and watch our clips pour in. Since our camcorder splits up our video files individually, we pick out only our favorites to transfer. Now, this spiffy new window is made only for grabbing our AVCHD video. The Log and Transfer process transcodes our AVCHD footage into a more editor-friendly video file. Get ready to wait a little while, as transferring plays out in about real-time (an hour for an hour), like capturing tape. We have to fret a little, since we have a new hard drive camcorder that should help make this process faster than tape, but the advantages aren’t as fruitful as we hoped they’d be. Final Cut Express 4 doesn’t allow native editing of HDV or AVCHD. As an alternative, FCE4 changes our video into Apple Intermediate Codec (AIC) video files. These are frame accurate’ and act like good ol DV25 video, which is great for editing. It’s really a “pay now” or “pay later” situation: we wait at the start instead of waiting for native AVCHD that has to constantly to re-render during editing. As and added bonus, the new Log and Transfer window gets us yards closer to a true “Batch Capture” feature. This allows us to select only certain parts of our video for import, cue them, and lets us walk away to leave our computer to do the work. A startling omission to Final Cut Express 4 is a mature HDV Capture window. Only a one-line dialog box appears, with few features. In the end, Final Cut Express 4 delivers video that we can edit more accurately than the native video captured by our AVCHD camcorder, but it simple HDV capture features leaving us wanting more.

Cutting to the Chase

Once we have all of our elements (organized, of course) inside FCE4, we start to cut and assemble our video clips. Thanks to Apple’s new feature that allows different types of video to be cut side-by-side, we don’t have to worry about resizing our video. Our standard definition video is automatically scaled up to fit in our HD project. Our Photoshop PSD files are accepted on our timeline with their layers intact. FCE4 imports a PSD file into the Project window as a Sequence. The Sequence is added to the Timeline as a clip, where each layer is given a video track. When we add non-widescreen DV in with our wide HD video, the DV appears with a pillarbox’; where a vertical black bar is added on either side to fill in the gaps. A nice example of FCE4’s feature set resides in the toolbox. These are the same industry-proven tools that come with Final Cut Pro 6, including Ripple Edit, Blade, and Pen tools. We used the Pen tool to add audio keyframes right on the Timeline, along with motion keyframes to our video. The result? Our video zooms away as the corresponding audio fades down into the end credits. Another effect we add to our video is a Color Correction filter. This visual-based effect features a window with two colorful wheels in which you can adjust the white balance of a clip, among other things. It’s effective and fun, allowing for a high degree of creativity for those who explore it.

Although Soundtrack, Apple’s mid-level audio editing tool is gone from the bunch, LiveType 2 is around and kicking. We picked out some moving text, called Live Fonts, which can dance or blow up or scroll. There are a myriad of different backdrops too, all user adjustable and able to be tweaked from the stock look (quite edgy) into more organic-looking images. We can choose HD 1080, HD 720 or DV LiveType 2 projects for direct import into Final Cut Express 4.

Overall, Final Cut Express 4 serves as a solid editing tool and a great stepping stone from iMovie to FCP. Although Soundtrack is no longer a part of this sleek bundle, Final Cut Express 4’s price drop helps make-up the difference. With its support for AVCHD and other popular high-definition video formats, including many top features found in Final Cut Pro 6, Final Cut Express 4 is a perfect editing application for most semi-pro editors.

Number of Video Transitions and Filters: 200+

$199 ($99 Upgrade from any previous version of Final Cut Express)