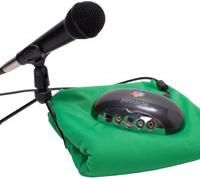 When the dust settled from Avid’s acquisition of Pinnacle Systems, one thing was for certain: Pinnacle’s vision for multimedia, “Make, Manage and Move,” still held true, even today. Studio MovieBox Plus embraces that vision and expands upon it by “Motivating” beginning video producers to shoot and edit their videos in an exciting and approachable way. Studio MovieBox Plus is nearly a complete video production studio in a box. If you’re looking for a starter kit, this one is worth a closer look.

We feel the packaging needs to be modified slightly so consumers can see what’s inside more easily. Just by looking at the box you might miss that buried inside is a cardioid handheld mic with desktop stand and a rather large 6-foot square green screen cloth. What you do see is the obvious USB 2.0 breakout box that allows you to pipe in FireWire (including device control), composite video, S-Video and stereo analog audio. You’ll also be able to use a second set of these connectors (except FireWire: there’s only one port, but it serves as both an input and output) on the back of the box for full-screen preview, or out to some sort of recording device. This breakout box makes connecting your devices a one-time deal, assuming your analog device has separate inputs and outputs. It’s also important to note on this breakout box that the DV stream is transmitted through the USB 2.0 cord, making this a first of its kind, as well as making USB 2.0 on your computer an absolute requirement.

Moving away from the box, toward the software end, Pinnacle Studio 10.6 (version 10.7 is now available) is a rich and powerful program that makes video editing simple. Perhaps it’s even too simple with its background rendering and edit-everything-in-the-timeline interface, which allows you to author your DVDs in the timeline as well. We love the background rendering feature. On our Gateway E-6610 Workstation (powered by a 1.86GHz Intel Core 2 Duo processor and 1GB of RAM) the background rendering made small work of standard definition video, even when working with the chroma key filters. Results will vary upon your processor speed and the number of effects applied to your clips; but for the mere basics in video filters, you won’t be slowed down too badly. Furthermore, making DVD authoring much easier, Pinnacle Studio allows you to drag and drop multiple menus into the timeline itself. From there, the program can auto-assemble multiple chapter marks based on time intervals, or you can manually insert them, including return markers. This is by far one of the more brilliant ideas we’ve seen, allowing beginning users to continue to use the familiar timeline interface as they build their DVDs. The downfall to this, however, is that you can make a mess of your timeline in more complex DVD authoring projects. At some point you may want to consider adding an additional DVD authoring tool to reduce the risk and complexity when you’re ready for more control. Otherwise, it’s a great tool that has plenty of customization to give most DVDs the pizzazz they deserve.

Back to the Basics

Pinnacle Studio 10.6 has an easy-to-navigate, clean interface. There are basically three modes to the video editing application: capture, edit and make movie. In the capture mode, Studio has an oversized pie chart showing how much space is left on your default drive. You can also customize locations, file types and much more to fit the needs of your computer, playback devices or project type. Since it’s a software application built for beginning and intermediate editors, we were surprised to see just how many customizations were available.

In the Edit tab (this is where all the magic happens), there’s clip trimming, a highly useful text titler, a full-on audio mixer capable of 5.1 surround sound, a multitude of effects and transitions, a single monitor window, (plus an additional computer monitor and an additional monitor out from the breakout box,) along with the DVD authoring feature.

So, there’s plenty of things you can do in this application, plus room to grow. There are many “try and buy” (as we like to call them) plug-ins that allow the editor to fully try out the filter effect with a Pinnacle watermark. If you like it, you can purchase it online, (in most cases you have to purchase the volume that the effect resides in,) and use it without restriction in your production. Pinnacle calls this its Premium Content. While we like being able to see what’s “out there,” we’re a little disappointed there’s not much documentation on which effects you’ll get and which you must buy. A little more info here would be nice, although it’s hard to expect with so much third-party interaction this product incorporates. So, we’d strongly encourage you to do your own research here if having content like this is important to you.

We’d recommend taking a look at the trial version of the software to see if its workflow is compatible with the way you operate. Also, we need to note that the software itself has additional capabilities that we didn’t have time to test, as we concentrated mostly on the video capture box.

Finally, Studio has since been updated to version 10.7, which makes the HD DVD Authoring Pack ($50) upgrade a possibility. Pinnacle has stated that they’re not exclusive to this format, but that’s where they stand at the moment. If you’re looking for a simple, affordable video editing solution for the true video enthusiast, Pinnacle Studio MovieBox Plus is a great solution. And, let’s not forget you’ll also get a green screen and a very decent handheld microphone to boot.


For beginning video editors, Studio MovieBox Plus is a highly motivating, easy to work with application.