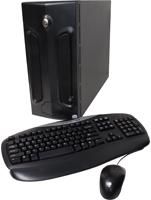 If you’re in the market for a new video editing computer, you are no doubt considering how it will handle high-definition material. Or perhaps you’ve got multiple mediocre computers assigned to different tasks cluttering your workspace. Either way, making do has you longing for something more.

That something may well be Alienware’s new 8550. Featuring two quad-core 2.66 Xeon CPUs with 8MB of L2 cache in a robust workstation design, it may have you feeling hard-pressed to max it out under normal editing conditions. We were.

As with all Alienware systems, the cool-factor is high. It starts with the leather Quick Start Guide and moves on to the custom case with a full-face plate that swings out and tucks tightly to the side…a nice touch that should prevent the all-too-common open-door-knee-whack syndrome.

Inside, the cables are tucked, folded and secured neatly, and all of the interior components are laid out to maximize airflow and accessibility. Four fans keep the interior space at a pleasant 90 degrees even with the front panel door closed. Alienware designers dampened sympathetic case vibration and some internal noise by padding the interior with 3/16-inch foam. The large open grill on the front allows hard drive noise to seep out, so the padding’s impact may be negligible.

On the outside, the front panel features a Lightscribe 48xCD/16xDVD writer, 9-in-one multi-format card reader, one FireWire and two USB connections, and headphone and mic jacks. The back panel hosts dual DVI connections and a single S-VHS output from an NVIDIA Quadro FX 560, two gigabit Ethernet connections, a FireWire port and I/O for the Creative SB X-fi sound card.

Firing on All Eight

With eight CPU cores at our fingertips, we had to think about providing the bottom-line answer, “How fast is it?” Well, faster than what? Your old system, of course! For our real-world performance comparisons, we used a system that’s been doing OK with SD footage and can grudgingly handle some HD, but over time has become rather bloated with software and other Internet gunk and is not as zippy as we really need for some serious editing. (Sound familiar?)

Our comparison system’s main specs are: 2.6GHz Intel Pentium 4 dual-core with 512MB L2 cache and 1GB of RAM. Windows XP Home is on one drive and another 7200RPM SATA drive is dedicated to all media. All drives in the 8550 and our comparison system have plenty of room and were defragged just before our tests. Specs for the 8550 are below.

The 8550 came loaded with the latest version of XP Pro, and we installed Adobe’s CS2 Production bundle. We then loaded all the media files used in a 17-minute training video, including dozens of SD clips, After Effects comps, high-resolution stills, text, graphics and audio, onto the 8550’s second SAS drive.

We then loaded our 17-minute project into Premiere Pro and associated all the media with the new location on the local drive. We opened Windows Task Manager to watch how the rendering process would use the multiple cores, and then we exported our movie. We noticed that only three cores were used most heavily. This is due to current software limitations of using no more than four CPU cores. The CPU load, therefore, only ranged between 15 and 29 percent. Still, the render completed in 29:02 on the 8550, and our comparison system took 77:12, using 62 to 100 percent of its CPU capacity. But, as you can see, the 8550 didn’t break a sweat.

To really give our Alien a workout, we had to go beyond what our comparison system could ever handle: run every CS2 Adobe Production Suite program with CPU-intensive operations at once.

We started each program that would routinely require render processes cooking in the background with lengthy files. This included Premiere Pro, Encore, After Effects and Audition. We wrote a quick Photoshop action that applied nine complex filters to four 24MB stills and had Bridge convert 100 RAW stills to DNG via FireWire to an external drive. While these processed in the background, we alternated using Illustrator and ImageReady files to gauge system responsiveness.

The results were impressive, not only because it worked without a hiccup, but also we still could work with files in our two non-rendering programs. Yes, we experienced reduced responsiveness, but we could still get some real work done. All eight cores ran nearly equally, and the overall load never exceeded 91 percent. In fact, had there been more than 2GB of RAM and another hard drive, we may not have experienced any slowdown.

We were pretty sure that, given the above performance, the 8550 would have no trouble handling HDV editing, but we checked anyway. We were right. After importing a few HDV clips, we could tell no difference in system performance between editing SD and HD.

Finally, one of the best aspects of owning any Alienware system is having 24/7 tech support. To check, we called it up. Zipping through a short phone tree, we talked to a real person in just a little more than a minute.

There are plenty of other features we haven’t looked into, like built-in RAID, networking and server capacities, but we wanted to play with the tools we thought you’d most likely be using.

So, is it fast enough…or too fast?

A high-performance workstation that easily handles the demands of working professionals and serious enthusiasts moving into the world of high definition.