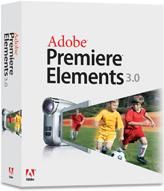 In the hobbyist video editing software market, Adobe Premiere Elements holds a niche somewhere between a simple, limited interface and a complicated, full-featured program. The key to success for such a product is its ability to please both the high-end hobbyists, who wants more sophisticated features as their skill grows, as well as the beginning editor, who wants simplicity above all else. In both regards, Premiere Elements 3.0 shines brightly, offering beginner-level enhancements such as monitor-window editing and sceneline shot arrangement, and a few more sophisticated upgrades, such as stop-motion animation, HDV support and unprotected DVD capture. Rounding out the new features are the ability to input and output MPEG-4 still camera, camera phone and video iPod files; greater integration with Photoshop Elements 5.0; full-screen previews; a greater selection of DVD menu templates; and an enhanced set of narration tools. Like previous versions of Adobe Premiere Elements, version 3.0 is a great product at a great price and a top performer in the $100 and under video editing software category.

To test Adobe Premiere Elements 3.0, we installed the software on a 3.2GHz Pentium 4 with 1GB RAM running Windows XP SP2.

Elements makes use of an iMovie-style capture window to import clips from a camcorder-an elegant solution which remains one of the easiest and most user-friendly ways to get video onto the computer. To import media from other devices, the Media Downloader tool provides an interface that resembles most still-camera import functions. The ability to bring in video from a wider array of sources is an important enhancement, due to the increase in the number of consumer electronics devices that can record digital video and the steady increase in their quality.

Another nice input feature in version 3.0 is the ability to import still-image slideshows from Photoshop Elements. This allows users to make use of Premiere Elements’ enhanced narration and audio mixing features or to incorporate a still-image slideshow within a larger video project.


In the past, hobbyist-level video editing software solutions generally had one of three types of editing interfaces: a timeline interface, a storyboard interface or a monitor-window based interface. With Premiere Elements 3.0, you can take your pick. The monitor window now supports direct editing capabilities, with the ability to split, trim or add titles to a clip without ever touching the timeline or storyboard. Similarly, the new Sceneline interface displays a video as a series of clip icons, with spaces for transitions in-between.

There are many things about editing with Adobe Premiere Elements 3.0 that simplify the editing experience for beginners, such as the auto-sizing timeline that appears below the monitor window and the liberal use of infographic (visual representation of information) icons throughout the interface. Where the interface really shines, however, is in the ways in which it mirrors the functionality of its elder sibling, Adobe Premiere Pro. The inclusion of a Properties window that allows control over the effects, for example, serves as a means for hobbyists to increase their knowledge of video editing in a way that also gives them greater control over their productions.

Two other enhancements worth mentioning include the full-screen preview option, which is a good substitute for a video editing monitor, (which most hobbyists don’t have available,) and the stop-motion animation controls, which are just plain fun.

The comments we made about supporting the increasing number of digital video recording devices in today’s consumer electronics marketplace goes double for video playback devices. Whether it’s a video iPod, a cell phone, a Sony PSP game console or some other yet-to-be device, the ability to output video to today’s video viewing technology is an important area of video editing functionality. Adobe’s support of these devices via MPEG-4 output and multiple input interfaces is a testament to the company’s ability to look into the future.

Version 3.0 also includes dozens of new DVD menu templates, which can be simply dropped into the monitor window to quickly author a DVD of your video. The quality of the template designs ranges from elegant and sophisticated to shoddy and just plain ugly; it seems that in many cases Adobe was clearly going for quantity over quality. On the plus side, the ability to easily create your own DVD menus in Photoshop Elements (sold separately or in a bundled option) is a fantastic advantage.

Bottom line: in the under-$100 category, it’s hard to imagine a more completely satisfying solution than Adobe Premiere Elements 3.0, for both raw beginners and for the more sophisticated hobbyist.

One of the best video editing products for beginning and intermediate editors.