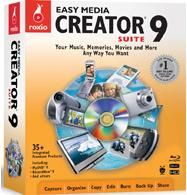 <p
Roxio provides superb disc burning utilities, with easy to understand interfaces and the functionality you’d come to expect from such a specific product category. Easy Media Creator 9 brings a lot more confusion to the table, blurring the lines between a disc burning utility and a full-on video editor and DVD authoring solution. We were impressed with all these useful features. Keep in mind, while Easy Media Creator 9 does more than make movies and burn a disc, we’ll be focusing on the features that aid the beginning videographer.

One thing that’s nice about Easy Media Creator 9 is that you can use it not only to capture video, but also you can interface with digital still cameras. Having one application that covers both makes one fewer program you’ll have to learn. For those absolute beginners out there, this is a nice feature. Beyond that, the video capture utility allows users to capture via your supplied devices at several presets, set from the common DV format to DVD friendly flavors. You can also capture straight to a DVD if that’s appealing to you. Either way, getting your video into your computer is an easy task. Easy Media Creator 9 will also let you decide where these files will be saved, and you can also set a capture length. This way you won’t have to babysit your captures, setting a determined capture time length. We greatly appreciate this feature.

After you’ve got the footage and stills in your computer, you’ll want to mash them up, right? Well, Easy Media Creator 9 comes with a rather robust editing application. The video editing utility feels like a separate application on some levels, but it certainly isn’t a full-on video editing application. Although, we admit it’s deceiving. In fact, for basic edits, you’ll have no problem putting together sequences, especially considering that there are 11 video tracks, 7 audio tracks, 10 text tracks and 4 effects tracks. We’ve seen fewer tracks on genuine video editing applications. Where Easy Media Creator 9 falls short in terms of being a full, rich application is the additional windows in the interface, which don’t dock in the main window, but float above it. In other words, the interface at times is a little cumbersome. However, we think beginning editors will feel at home, at least until they’re ready to move to a more efficient interface for much bigger projects.


Whether or not you enjoy the art of editing, sometimes there are those projects that you don’t want to endure or don’t have time to do. Easy Media Creator 9 has just made those moments much more do-able with its CineMagic wizard that makes the edits for you. In this wizard you can select videos and stills, arrange their order, apply a theme or style to the production (e.g., travel, people and places, sports) and background music. You can preview your movie and, if things are generally to your liking, you press the “Finish” button. Now here’s where the real magic happens. The production you just whiz-bam’d together is now imported to the timeline, including all the edits and transitions from all the media clips. Now you can fine-tune the production if you want, but the majority of the groundwork has been laid down. You might, from here, add a few video filters, but you certainly don’t have to. The slideshow wizard does the exact same thing; however, you’ll only be able to add stills. Furthermore, the wizard allows you to apply those fandangled pan and zoom effects, either to the whole production, or (and this is brilliant) to each clip individually, which you can adjust to your liking. I’ve seen many slideshows which use this effect without thought. Well, Easy Media Creator 9 has given no excuses. We will now hold you accountable for making your pans and zooms intentional and thoughtful.


It wouldn’t be a Roxio product if you couldn’t burn this video somewhere, now would it? Easy Media Creator 9 has all the usual DVD flavors, plus Blu-ray support. While the Blu-ray burning utility is rather uninspiring, at least for now it’s technically possible (assuming you’ve got a Blu-ray burner in your computer). More so, your typical DVD burning utility is a little weak as well. We’ve seen more appealing presets and themes, as well as more impressive features. We did appreciate the preset for burning a DVD without a menu, which in some cases might be your best bet.

Easy Media Creator 9’s real strength is its ability to convert nearly anything to a multitude of formats. Supported formats that we don’t see every day (e.g., DivX, TiVo, DVR-MS, etc.) are a nice touch, but not too useful for the majority of us. What you’ll find incredibly useful is the ability to convert to/from the more common formats, using a style of batch rendering which Easy Media Creator 9 calls “Video Compilation.” This will convert a batch of videos to one particular file type. The Compilation session can also be saved.

Overall, Easy Media Creator 9 is a great tool for beginning video editors and enthusiasts, with a forward-looking approach of Blu-ray support and CineMagic wizard. And we’ve only touched a bit of its functionality. It will also back-up, archive, compile discs and much much more.

A very useful, inexpensive tool that covers a lot of ground in one application.

Keyframe Animation: No, except manual pan and zoom effect