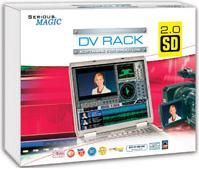 Serious Magic’s DV Rack video recording software made quite a splash when it first hit the market a few years back. Designed to turn any DV-friendly PC laptop into a powerful digital monitoring and recording workstation, the first version of DV Rack included a high-quality waveform monitor, a vectorscope, an audio spectrum analyzer, and a number of other powerful digital video monitoring tools in a single software package. In other words, Serious Magic attempted to put a good portion of a full-featured video production van’s mobile shooting gear onto a laptop computer, and succeeded admirably.

DV Rack, a video recording software product clearly aimed at the professional shooter who wants complete recording control in a portable package, has earned a place in the must-have category of serious digital video shooting tools. Now, with version 2.0, DV Rack offers motion-activated recording, stop-motion animation control, time-lapse recording, Avid Quicktime support, and 16:9 monitoring, as well as a number of other improvements. To put it through its paces, we installed DV Rack 2.0 onto a Toshiba Satellite A105 laptop, running Windows XP, plugged in a Canon Optura 50 camcorder, and did some shooting.

In order for users to make the most of any video recording software, familiarity is important. The DV Rack interface is built to resemble a real-world rack of digital video capture tools, right down to the rivets, knobs, LED readouts, and carrying handles. The user can stack these tools in any order, and use only the tools necessary at the moment; others can be easily hidden with a click of the Power button. While this makes the interface easy to learn if you’ve used these devices before, it can be a little difficult for those who haven’t. (The good news is that DV Rack can serve to teach students and apprentice videographers how to use these important pieces of gear before they ever lay hands on their real-world equivalents-potentially a budget-saver for cash-strapped schools.)

When Using this video recording software to shoot directly onto a laptop with DV Rack, you simply connect your camcorder via FireWire and put your camera in shooting mode. Then you can record video and audio clips onto the laptop, controlling them with the transport controls on the DVR (Digital Video Recorder) component. As new clips are recorded, they appear in a Clip List within the DVR interface, complete with detailed clip information and an audio waveform (useful for identifying clip starting points and specific soundbites).

A few seemingly obvious points are worth mentioning: in order to shoot digital video directly onto a laptop, you’ll need a long FireWire cable, and even the longest of these won’t allow you to roam freely. Also, if you plan to shoot outdoors and away from a power outlet, you’ll be limited by the battery power of the laptop. Most factory-supplied laptop batteries won’t last longer than thirty or forty minutes, so a long-life spare battery or two is essential for this kind of shooting. Even if you have a spare, however, it’s not as easy to change in the field as a camcorder battery. Add to this the necessity of moving the laptop from one shooting position to another, and the fact that many laptop LCD screens are very difficult to read in sunlight, and you can see that the world of direct-to-laptop recording isn’t quite the nirvana it’s sometimes made out to be.

Still, under the right circumstances (indoors with at least one crew member to help you out, a few extra accessories such as a computer screen sunshade for outdoor shooting, etc.), using this video recording software while shooting can be an excellent way to take control of your digital video signal, and keep all of the technical specs of your shots as compliant as they need to be for the most demanding broadcast applications. It’s also a time-saver, because it allows you to make quick edits in your laptop’s editing software right there at the shooting location, in order to see how the final cut will look and whether another take is necessary.

One new feature of DV Rack 2.0 that’s very useful is the Onion Skin effect, which allows the shooter to overlay one shot with another, in order to create precise matched-dissolve effects and other types of shots that require exact framing – very cool!

Beginning or intermediate shooters might find shooting with DV Rack 2.0 to be a bit frustrating, but it’s not video recording software aimed at their segment of the video market. For pro-level shooters, a laptop equipped with DV Rack 2.0 can be a great way to take control of the digital video signal without having to purchase loads of new hardware.

At press time, Adobe has just purchased Serious Magic’s video recording software, DV Rack 2.0. We’re anxious to see what changes Adobe may have in store for this incredible software that is unmatched in its field.

In the right circumstances, DV Rack 2.0 can replace an entire production truck’s worth of monitoring hardware.