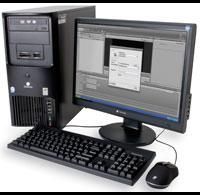 I personally still remember the first Gateway PC that I used some 12 years ago, at a friend’s house. The machine was slim for its time and included some interesting quirks, but was generally quite usable. But this was also back in the bad ol’ days when Windows 3.1 was still the king of the hill.

Time has rolled ahead, as it always does, and has put us face-to-face with one of Gateway’s newest workstations, the E-6610D SB. This is clearly not your parents’ Gateway–the similarity stops at the cow spot logo.

Like the late, great Johnny Cash, the E-6610D SB is dressed in black; though unlike the singer, the machine includes blue power LEDs and a silver accent on the optical scroll mouse, worthy perhaps more of an Elvis than a Cash. The workstation is housed in a solid case that includes 120mm fans, even on the 400W Delta power supply. Those big fans move more air with fewer motor strokes than a comparable 80mm fan, which keeps the machine very quiet. There is also a pair each of front panel USB 2.0 and FireWire ports, along with 1/8″ headphone and mic jacks.

The keyboard is utilitarian–no handy buttons for launching Web browsers or adjusting the system volume, but it definitely gets the job done. Both the keyboard and mouse are USB peripherals.

Under the hood, the two hard drives were configured as a stripe using the onboard Intel Matrix Storage controller. The motherboard also includes a Texas Instruments FireWire controller, and a handy-dandy card reader (SmartMedia/xD/CompactFlash/SD/MultiMedia Card/Memory Stick/Memory Stick Pro) lives in one of the 3 1/2″ drive bays. A Sigmatel-based HD audio chip was onboard and sounded great through headphones. Optical and coaxial digital audio outputs are also included, so you have some audio options.

Our machine also shipped with an NVIDIA GeForce 7600GS-based PCI Express x16 video card in the single PCI-E x16 slot, and included an additional Express x4 slot on the mobo (motherboard, for you less geeky types). There are also 2 standard PCI slots available, if you need them. The Gateway FPD1975W 19″ widescreen monitor includes both DVI and VGA connectors, though only a VGA cable was included, so we had to use the included DVI to VGA adapter. By default, the resolution out of the box was 1024×768, but we installed the included EzTune utility by Portrait Displays, which gave us a convenient way to up the resolution to the preferred 1440×900 at 60Hz. We could also adjust other display settings easily, directly through the utility.

The very first thing we noticed after the machine booted is that the desktop (complete with wallpaper featuring striking green grass with beads of dew and a great depth-of-field effect) is refreshingly clean–a big change from a lot of other new machines. Only Windows Media Player and Adobe Reader icons appear, in addition to the Recycle Bin.

Our evaluation machine runs Windows XP Professional and shipped with Adobe Reader, Microsoft Office 2003 Basic, Norton AntiVirus and Client Firewall, PowerDVD and an OEM version Nero Express installed. Once we attached the machine to the office LAN, it needed 18 critical Windows patches, along with patches for Nero, Adobe Reader and Microsoft Office, not to mention current signatures for Norton Antivirus. We also noticed a PC Angel partition for simple restoration of the system to a factory configuration, although a restore disc is also in the box.

We tested out a convenient copy of Premiere Elements 3.0, and we found that its performance was quite snappy. (The limitations of the VGA connection were evident with a look at Premiere Elements’ gray interface, however–while everything was still very readable, the video was noticeably lower in quality than it would be if it was going through a DVI connection. We’d strongly recommend springing for that DVI cable.) We don’t think you’d have problems running any current editing app on this system–anything from Adobe, Sony, Ulead or Avid should perform quite well on this new machine.

We were very satisfied with this workstation’s high build quality and quick performance, along with its long-term potential for a rapid video editing and DVD authoring experience.

Great A/V performance for not that much green.