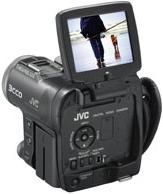 The JVC GR-X5U is a great solution for dual purpose still and video camcorders, especially if still photo quality is most important to you. Shooters who spend just as much time snapping shots as they do shooting video, will want to take a closer look.

Unlike most camcorders these days, the GR-X5U has a unique cube shape. It's height, width and depth are nearly the same size, but it still shows off a rounded, modern look. Holding a camcorder of this form is a little weird at first, but after a few minutes it becomes more comfortable.

For a 3CCD camcorder, the lens barrel is incredibly small. There appears to be a focus ring at the end of the lens, but its actually static and doesn't do anything but sit there and look like a focus ring. There's nothing more pointless than a focus ring that's not a focus ring, but it looks cool. If you truly want to focus manually there's a small dial just below the lens and a Focus button just next to the dial. The placement of the auto/manual Focus button could be improved upon, as it is easy to accidentally activate. Adjusting exposure and AE modes is done with the same dial as well.

Included with the camcorder is a wireless remote and Cyberlink's PowerDirector 3 DE and PowerProducer 2 Gold DVD (Windows Only). The camcorder has FireWire, USB, S-Video and Composite video connectors, which pretty much covers all the consumer options.

Within the AE modes, the Shutter priority and Aperture priority modes are nice features. These modes allow you to lock in a user specified shutter speed or aperture while shooting video or stills. The camcorder otherwise is relatively limited without these features, as you can't manually adjust the shutter or aperture, except through these program modes.

The GR-X5U has a mic input, headphone jack and accessory shoe to give the shooter plenty of options to optimize the audio. The headphone and mic jacks are located very close to the front of the lens, so managing those connections with some gaffers tape might be a good idea so that they don't accidentally appear in your shots. Otherwise, using the onboard microphone will certainly yield results without obtrusive cords.

The onboard microphone is located just above the lens and doesn't pick up any zoom motor noise, which is impressive considering how close it is to that mechanism. During our tests it picks up sound modestly well at distances of 15 feet and beyond, really dropping off at about 25 feet. The quality of the sound from the onboard mic is good. The audio from our test footage was rich and full sounding.

The image properties of this camcorder are great for the still photographer who also wants full frame video, but it's up in the air for shooters who want the top tier of video quality. The auto focus during zooming repeatedly hunts and in our lab tests we found that overall the auto focus performs erratically. Also, the digital image stabilization is performs decently, but at this price range we expected slightly better results.

Be that as it may, the test footage we shoot looked pretty good. Although, in our lab test, extremely over saturated reds dominated the color balance. Overall, we've seen much better color balance from lower end camcorders.

The auto white balance and exposure did a good job, otherwise. The camcorder tends to slightly underexpose its images, preventing situations were details might get blown out from bright scenes. Additionally, let's not forget to mention the still mode, which renders very crisp high-resolution pictures.

The GR-X5U has a lot to offer still photographers who want to have a full frame, digital video camcorder on board. While its design takes a little getting use to, the 3CCD, Mini DV and 5 Megapixel imaging properties are hard to come by in similar types of camcorders. For most videographers, however, there are plenty of other options that may not look so good on paper, but have an overall better user experience and comparable results.

Onboard Video Light: no

This camcorder is a still photography whiz with some sizzling video specs, but might not be the best tool for intermediate videographers.