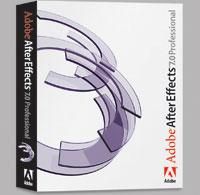 With After Effects 7.0, Adobe rolls out an impressive list of new features for its highly successful visual effects and compositing software. There are so many new features that it'd be foolish to list them all here; we refer you to the company's Web site for an exhaustive treatment of the subject. Some of our favorites, however, include the following: an elegantly functional new user interface; the Graph Editor; better integration with other Adobe products; enhanced OpenGL support; 32-bit HDR color support; and dozens of new Animation and Behavior presets. A few of the new features (such as the new Adobe Bridge interface) don't seem quite worthy of the hype, but overall, After Effects 7.0 is one of those rare birds in software development: a fully fleshed out new version that was well worth the wait.

To test After Effects 7.0, we installed the software on a Pentium 4 computer running Windows XP Pro, with 1GB system RAM and a 128MB ATI OpenGL video display adapter.

The new After Effects 7.0 user interface (which is shared by other members of the Adobe Production Studio family, including Premiere Pro 2.0, Encore DVD 2.0, and Audition 2.0) successfully bridges the gap between space conservation and ease of use. (See Videomaker's April 2006 for more on the bundle interface.) This new interface is very easy to use and intuitive; most users will find themselves setting up and saving new workspaces within minutes of installing the product.

One other UI-related item that's found in After Effects 7.0 is the Graph Editor, which though not an Adobe innovation is nonetheless a welcome addition. The Graph Editor presents effects in a two-dimensional graph, with time represented horizontally and either effect values (such as opacity, rotation, position, etc.) or an effect's rate of change represented vertically. Once you get the hang of it (and it may take a few tries before the light bulb goes on), you'll find yourself wondering how you ever got along with those old-fashioned, one-dimensional timelines; the Graph Editor allows users to tweak effect parameters with a much higher degree of detail and finesse. (Note: earlier versions of After Effects included graphs for some effects, but they were very limited in comparison to the new Graph Editor.)

Though our test computer did not have the recommended OpenGL 2.0 card for After Effects 7.0, we nonetheless were able to download an OpenGL 2.0 driver for our card and the hardware-assisted previews we achieved were very impressive. We do, however, recommend purchasing the best OpenGL 2.0 card you can afford, as this will assist you in creating realtime previews of multilayered compositions, complete with support for blending modes, motion blurs, track mattes, and many other effects.

For the time-strapped video effects technician, two of the most useful features in the After Effects 7.0 upgrade include the huge selection of Animation and Behavior presets and the workflow integration with other Production Studio products. Even if you do nothing else with After Effects 7.0, simply toying around with the different combinations of presets can yield a nearly infinite variety of cool combinations. As for the product integration piece: imagine there's a way to export a frame of your composition to Photoshop CS2, or to export a sequence of effects to Premiere Pro 2.0 with a single menu command, and you'll begin to get the idea, which can be a real time-saver for repetitive cross-product tasks.

Most video editors will be more than satisfied with what the Standard version of the software has to offer. HD editors, however, might find the Professional edition's ability to work with 32-bit, HDR (high dynamic range) footage worth the added price. Others might have need of the new, improved slow-motion effects, dubbed Timewarp by Adobe. Other Professional-edition perks include a wider range of effects, enhanced keying and matte tools, motion tracking and stabilization tools, the Wiggler for randomizing motion, and network rendering support.

One minor negative note: the Adobe Bridge, an ambitious attempt to provide advanced file-handling capabilities to a range of Adobe products, is hard to get used to, and of dubious usefulness, at least at this stage of the game.

Taken as a whole, the latest version of After Effects is a giant step forward for this already-impressive behemoth of the video effects industry. It's everything it's cracked up to be, and more.

A huge step forward for an industry giant.