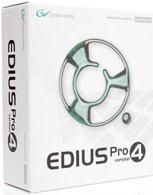 Canopus, according to its Web site, is the name of the alpha star of the Carina constellation and the second brightest star in the sky. Because of its brightness and stability, Voyagers 1 and 2 relied on the Canopus star to navigate through the solar system. Canopus was also the pilot of Menelaus' ship on his quest to retrieve Helen of Troy after Paris abducted her. The question is: Will Canopus EDIUS Pro 4 help you navigate your travails to tell your story? Let us pay the ferryman and find out.

Much of the allure of Canopus EDIUS Pro 4 is the seamless handling of mixed formats with uncompromising quality. Editors can pull from SD, HDV, HD, MPEG-2 and uncompressed sources of varying aspect ratios, resolutions and frame rates without converting first. Of course, you'll need a computer that can handle processing any video streams that need to be converted in real time. In other words, if you want to take advantage of this feature, make sure you take a look at the recommended system specifications. Add effects, transitions and titles without having to render, and you can begin to imagine the possibilities.

Hobbyist videographers do not normally work with formats other than DV or MPEG-4 for their projects, nor do they normally fight with different frame rates. Many of you may be intrigued by EDIUS Pro features, but know that EDIUS Pro is targeted squarely at the prosumer or professional.

Canopus has packed EDIUS Pro 4 with loads of features that one would expect from a professional non-linear editing system. The Multicam Editing Mode is a snap to invoke and use. Pressing F8 reveals the Master Channel viewer that displays up to eight different sources. Select the camera source by pressing the corresponding numbered key.

The new Nested Timeline Sequences in EDIUS Pro 4 are also first-class citizens. Sequences sit alongside their clips brethren in the bin and can be dragged onto the timeline and have any number of effects or filters applied.

The next two features are not only easy to use but also addictively cool. Every property of the color correction filter is key frame-able, giving you exact control over your color corrections. The new Time Remap tool allows you to set multiple, key framed speed adjustments to a clip, without affecting its duration on the timeline. The tool uses a separate window to set and drag the key frames. The results are both immediate and gorgeous.

EDIUS Pro 4 again reaches beyond your typical video and audio formats by including AC-3 audio decoding. Imported Dolby Digital clips keep their audio channel configuration. If you have to edit footage from DVDs, this is a feature that will be especially useful to you.

The Canopus HQ codec is their proprietary intermediary codec used to enable many of the real-time capabilities EDIUS Pro touts. The Canopus HQ codec now supports alpha channel information within the video data. You no longer need to use uncompressed HD or still image sequences when compositing and layering video.

Many of you may now be salivating at the mere hint of what EDIUS Pro 4 offers. Stay those knives. EDIUS Pro 4 introduces a change to its plug-in architecture. This affects third-party plug-ins such as Boris.The good news is that the Canopus team is working on fixes; in fact, Boris may very well be fixed before this article is published. Any project in-progress using third-party plug-ins should remain on previous versions until you know that your plug-ins are supported. To complicate matters, the installation of EDIUS Pro 4 recommends the removal of any previous version of EDIUS Pro first. However, it is technically possible to have both versions installed. If you've modified your keyboard shortcuts, you'll need to create a customized settings file to save settings and to restore into EDIUS Pro 4.

EDIUS Pro 4.00 is somewhat unstable. Seemingly, innocuous acts such as importing audio sampled at rates other than 48k can cause application failure. WAV files with embedded metadata tend not to import. During evaluation, I experienced two other crashes that I cannot attribute to any specific act. Canopus is aware of these issues and with any luck will have an update with appropriate fixes. Unfortunately, their latest 4.01 update did not address these issues specifically.

The default window layout assumes you have dual monitors, so on a single-monitor configuration, the layout is a mess. Even after switching to single monitor layout, the palette windows overlap the timeline. You'll have to spend a few minutes setting up the layout to your liking, before you'll feel comfortable in Edius' space. Again, nothing major, but this lack of attention to detail creates unnecessary confusion to those new to EDIUS Pro.

EDIUS Pro uses a USB key to store your license and is required at all times. While there is a License Transfer application that allows you to transfer your license from the USB key to a PC, should you change your hard drive, the license may become invalid. Canopus recommends using the USB key. But don't lose it! If you’re working in a busy environment, you may want to consider getting an internal USB port installed so the USB key can exist inside your CPU's case.

Canopus EDIUS Pro 4 is an exceptionally capable editing suite aimed at the prosumer or video professional. Canopus demands that you learn their editing paradigm using an interface that, while more accessible, is still not as discoverable nor as easy to use as their competitors'. The persistent user will gain an invaluable tool to turn your vision into reality in real time.

Furthermore, an upgrade path to EDIUS Pro 4 Broadcast might give aspiring professionals further room to grow into bigger shoes.

This is an impressive real-time editing solution that is plagued with a few bugs, but has the potential to bring in a new era of video editing.

Joseph Dries is a freelance writer and consultant.