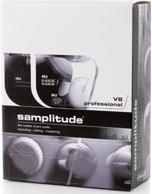 If you’re in the market for a Windows digital audio workstation, there aren’t too many choices these days; Adobe, Avid and Sony have most of the media editing locked up. There are some freeware and shareware alternatives, but none claim the kind of stability and support offered by the big boys. Let me suggest another name to add to your shopping list: Samplitude. Distributed these days by Magix, Samplitude is a mature audio platform with history and a track record — it’s just been flying under the radar for a few years. Some high-end mastering and production houses have adopted it as their platform of choice, so it must be worth a look.

Let me just get this out of the way up front: Samplitude V8 Classic doesn’t install, upgrade, look, feel or act like any media production software you’ve ever used… period. Nevertheless, it is a highly capable, professional package that can accomplish virtually any audio task you throw at it. We installed Samplitude on a 3GHz P4 with 1GB RAM and dual-head graphics — nothing fancy, but more than the recommended minimum system. Installation time was short, but got stuck on our first try. The second attempt worked fine. Samplitude uses a security system in the form of a USB key containing your authorization information known as a dongle. The key must be installed before you launch the program and an Internet connection is required for first-time activation. After that, you can use the software without being online, but you’ll have to keep the dongle attached to your system. We know Avid Xpress Pro and a few other programs still use these but, frankly, they are a major turn-off in our book.

Software registration isn’t exactly straightforward either. There were some hoops to jump through but, ultimately our registration failed because the software directed us to a non-existent web page. Then, we discovered that we could "register" Samplitude online by filling out a form and waiting for an email. You must register Samplitude to be eligible for updates and patches, but don’t expect the ubiquitous update wizard — you’ll have to go to the Samplitude website and download and install them yourself.

It’s All In There… Somewhere

After launching Samplitude, you’re presented with the Start Wizard — a simple pushbutton interface for selecting new or existing .WAV files or multi-track projects. Choosing the Record Wave File option opens another window containing record parameters. Samplitude supports up to 96kHz sampling rates with 32-bit depth so, if your hardware can handle it, you’re covered for any kind of project. Oddly, recording doesn’t take place inside the program but in the Record Parameters window. This is a little off-putting at first but, when finished, the .WAV file pops up in the edit window. There, you’ll find a floating transport control that offers big buttons, running time code, markers and an interesting jog/shuttle dial — it just doesn’t seem to have a home. With dual monitors, you can move it out of the way. Navigating the waveform is out of the ordinary too. Rather than the standard select and zoom, Samplitude uses several different ways to view the waveform. The most obvious method is the Zoom Range buttons at the lower right offering 1, 10 and 60-second zooms. You can also define custom zooms or even zoom in to a single sample if you’re so inclined. In addition, the navigation bar at the bottom of the waveform window is scalable, similar to some Sony products. What you can’t do is simply highlight and zoom.

Samplitude V8 Classic ships with a healthy supply of effects. Typical offerings include normalization, compression, equalization, echo, delay and reverb. Each uses a similar interface, several presets and a live preview to sample the effect. On the high-end side, there are amplifier and room simulators, a vocoder, noise reduction and an excellent multi-band dynamics processor to add punch and sparkle to your finished mixes. Samplitude also supports all your favorite VST and DirectX plugins.

Samplitude shines with multi-track recording and mixing. The mixer interface is clean and easy to understand with few oddities, but it doesn’t resemble anything in the waveform editing section. Samplitude makes use of the right mouse button for several functions. For instance, you can make basic EQ adjustments by moving the virtual knobs but a right-click opens the whole parametric EQ for full control. Likewise, right-clicks open any plugins you’ve inserted on tracks or the master channel. The mixer interface also includes full metering for each channel, subgroup, aux channel and the master strip. Once you’re finished with a mix, the audio is exported — much like a video editor — to one of several different standard audio formats. Samplitude V8 Classic doesn’t support surround mixing — you’ll have to upgrade for that — but includes an export option for use with Magix Movie Edit Pro. There, you can combine individual tracks into a surround mix.

The Moral of the Story

Did Samplitude V8 Classic — the ugly duckling — become a beautiful swan? We’re afraid the answer isn’t that cut and dried. Once a cutting-edge program, Samplitude’s interface looks a bit old and overly complicated. But, if you’re left flat by the audio offerings of the mainstream vendors, you should give Samplitude a try. It has all the bells and whistles of the competition, plus a few you’ve probably never seen, and finished audio tracks are as clean as they get. The user interface is clunky and the security dongle is a pain but it runs all day without a hiccup. We guarantee it’s unlike any other program you’ll find… but maybe that’s exactly what you’re looking for.

Samplitude shines with multi-track recording and clean mixing, but its interface is complicated and takes getting used to.