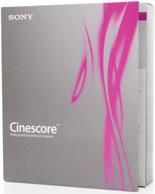 If audio is truly half of the total production, Cinescore might live up to be your better half.

Cue Up the Band


Installing Cinescore was a snap. The package comes with an installation disc (CD-ROM) and an additional DVD-ROM disc containing the majority of the music and sound effects. In total there’s not more than 1.7GB of audio to be stored from the DVD-ROM. That’s a rather light load for most users, which means you probably won’t have to buy an additional hard drive. However, you’ll definitely want to consider making RAM a priority in running Cinescore. Our modest Dell with a 1.7GHz P4 and 256MB was choking from time to time on video previews, even at draft resolutions. Sony recommends 1GB of RAM, and we would agree.


Sony Cinescore benefits new users to soundtrack creation by creating interactive tutorials. Upon opening the application for the first time, Cinescore prompts you to take the introduction tutorial. After about 10 minutes and 20 or so short slides, you’ll become familiar with the interface. Anyone new to video editing or soundtrack creation will benefit from this greatly. Otherwise, it’s a sure way for the rest of us semi-pros to not pull out the manual from the box. By the way, the manual is quite handy and easy to understand.


Sony Cinescore is not unlike most soundtrack creation software, in that the interface is pretty much ho-hum. There’s a timeline with multiple tracks (1 video and 3 audio), a video preview window, Stereo VU meters and explorer/project media window set. The real strength here is that it is not overwhelming or confusing. In fact, it’s so easy to use and incredibly easy to find your files with the explorer/project media window set.

The explorer window is just like having a Windows Explorer window open, but instead it resides within the interface. This makes tracking down video or audio files anywhere on you computer much simpler. Furthermore, if you just want to keep track of the files specific to the project you’re working on the Project Media tab will get you there in a single click.


One drawback is the audio track limits. After starting a new project and importing your video to the video track, the associated audio is imported into the next audio track. After that, you’ll have two more tracks to work with: the music track and the transition track. We feel that one more audio track would give users much more control for mixing natural audio, music, sound effects, transitions and voice overs. But you can still assemble a mean mix with help of automatic cross fades between different files on the same track. In other words, Sony Cinescore does help to make the most of the limited amount of tracks.


Sony Cinescore allows you to do critical adjustments to your audio file, specifically, audio envelopes for Volume and Pan, automatic crossfades and track-level gain. These features enable you to take more control of your soundtrack. Another great feature is the Extract Audio from CD feature. Most advanced users have their own favorite way of doing this, but this is one of the first times we’ve seen it as such a simple process. It brought smiles to our faces to see it build in to the File menu. If you have had trouble extracting audio from a CD in the past, this feature should alleviate your pain.

The greatest feature of all, however, is the Generate Music feature. Clicking this button will launch a whole new window and a whole new universe of music making.


The Generate Music feature is the heart of what makes Cinescore an innovative and powerful tool. Upon activating this feature, a new window appears where you can choose among many different musical themes, (20 in total from this package,) and many different variations of each of those themes. Many of these variations include multi-genre music (i.e. one theme may have a Funk, Latin, Urban, Electronic and Jazz version and sub version from those.) Most of these themes have a least fifteen different variations. Choosing your theme and variation is only the tip of the iceberg.

Once you have that selected, Cinescore inserts the musical score into a separate timeline window from which you can preview your score. From here you can change a multitude of properties of the track, (i.e. Ending Type, Starting Section, Mood, Intensity, etc,) and more importantly you can change these properties throughout the track by adding Hints. These Hints then become ways for you to adjust instrumentation, tempo, intensity and the overall mood of the track so that the music can change with your video. There are too many variables under the Hint tab of the Generate Music feature to cover them all in this review. If you want to see them for yourself, Sony is offering a free trial download of the software.


Cinescore is a great product for new soundtrack creators, especially for those on a tight budget. Intermediate users will also enjoy using it for its ability to take control of audio files and create dynamic scores. Also, Cinescore plays well with most common media files and can also render out a variety of files, (but it won’t convert SD to HD.) While there are definitely more powerful and rich scores available, there are not too many sound libraries offering the ability to change the song’s mood with numerous variables and candid timing. If Sony dedicates more themes with natural and rich sounding variations, Cinescore could be the leader in its class.

Sony Cinescore is a great tool for beginning and intermediate videographers who want to add royalty free music to their productions on a shoe-string budget.