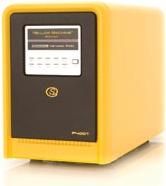 Bytes in a Breadbox

Videomaker's latest survey revealed an increasing number of you have three or more computers at home, and many are already on a home network. Instead of cramming yet another drive into one of your existing boxes to get another few months of storage, a Network Attached Storage (NAS) device may be just the solution.

So, while most people try to avoid bringing work home, when Anthology Solution's P400T Yellow Machine Terabyte Storage Appliance arrived, we knew one of us was going to gladly get out of doing dishes for at least one night.

To give it a real-world workout, we tested the Yellow Machine in a home network consisting of three increasingly speed-challenged PCs. The first is a still peppy 3.0GHz dual CPU Pentium 4; the second is an AMD Athlon 2000+; and the third is, well, let's just say we use it mostly for word processing. The first is running Windows Media Center Edition and the last two have Windows XP Home. And since we're talking network-speak, these three systems are now our "clients." And a D-Link DI-604 10/100 cable/DSL router ties everything together.

Our P400T came installed with four 250GB 7200rpm Seagate Barracuda ATA drives configured in RAID 5 (technically striping plus parity), which gave us total available storage space of about 680GB. Levels 0 (striping), 1 (mirroring) and 1+0 are also easily configured. While you could expect to get slightly faster performance (about 6MB/sec) in RAID 0, RAID 5 is a nice balance between speed and safety. If one drive fails, the data can be recovered. The P400T also comes with a built-in DSL/cable router (WAN port) with 8-port LAN switch and both NAT and SPI firewalls.

Depending on where you place your P400T in your network, it can serve as a simple NAS, a router, a firewall or a proxy. Since we already had a router, we used the factory default setting as an NAS.

If you already set up your own home network, installation should be very easy. Even if you didn't, the P400T setup wizard will guide you through a very automated and glitch-free setup. The lack of an advanced initial setup, however, may leave some more experienced users mildly frustrated.

As these units are designed to become the hub of your home or small office network, we tested how the P400T could handle multiple read and write demands. We first stocked the P400T with several media files of various lengths and types. We obtained a transfer rate of 4.8MB/sec when we transferred a single 1.55GB MPEG media file from our 3.0GHz unit to the P400T. Write performance will be slightly slower transferring from less capable clients and if you are transferring many small files. Other RAID 5 NAS units we've tried did test faster in the same environment. For read performance, we gave the P400T a workout by having three clients request three different media files of different lengths, looping them continuously for eight hours. All three of the files played back flawlessly.

It's worth noting that we were not able to access the same file by two different clients at the same time as is possible with some other NAS units. Anthology Solutions notes this is due to the P400T having 64MB of RAM. Not a big deal unless you are using the P400T as a media server and two family members want to watch your latest family history video at the same time on separate clients.

Usually power consumption and noise aren't a big deal, but if you are new to the idea of leaving your system on 24/7, then knowing your electric bill won't shock you can be important. While the power supply is rated at 200 watts, we found the P400T consumed a mere 44 watts of power under normal operating conditions. The noise generated by the fans was barely more than a whisper. Because it was so quiet, we were a little concerned about adequate airflow, so we kept the unit on overnight. Surprisingly, heat did not become an issue. Our tests with a calibrated digital contact thermometer measured a temperature of only 96 degrees at the exhaust fan. This compares to 93 degrees from the much louder and only marginally more effective fans of our 3.0GHz computer.

With its System on a Chip (Debian Linux), the Yellow Machine is not laden with extra operating system overhead, so boot to ready takes just less than a minute and should be dependable and nearly immune to virus invasion. Other cool features include an email system warning notification that can be automatically sent to you if the system detects any errors or if the drives fill past an amount you specify. And while we didn't have a chance to use the router or dig into security details, these are very attractive included features if you don't already have these in place.

If you are using multiple computers in your home/office and are constantly aching for more storage of standard definition video and other media, it’s worth taking a close look at the P400T Yellow Machine. If, however, you plan to jump to high definition soon, an NAS compatible with gigabit Ethernet will be required.

This is a professional level hard disk recording/audio editing solution, at a very affordable price.