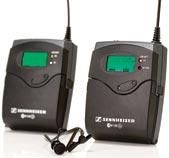 The evolution wireless G2 series from Sennheiser is a great choice in a UHF wireless mic system for the video professional, serious enthusiast, theater production or any other application where solid reliability and performance are insured at a very competitive price.

The evolution series comes in many configurations: lavaliere, handheld and headset choices for mic diaphragms, body pack and handheld attachments for transmitters and camera mountable and stand alone versions of receivers. In this review, we narrowed our look at just the ew 112-p set that includes the camera mountable EK100-G2 bodypack receiver and the SK100-G2 bodypack transmitter with a ME2 omni directional lavalier lapel mic.

The first thing we notice about the ew 112-p set is the sturdy construction of the metal housings for the transmitter and receiver. Well-made, attractive and not bulky. The LCD readouts are easy to understand and easy to see in a dark studio or low light situation. If you press the select buttons on the outside of either, the LCD lights up for 15 seconds or so and then will fade out, ready for action. The on/off button is inside the easy to access battery housing and must be held down for a second or two to turn on or off. This makes it hard to accidentally turn the unit on or off unless the operator or talent means to do so.

Unlike most wireless setups that use 9-volt batteries, the SK100-G2 transmitter and the EK100-G2 receiver both take two 1.5-volt AA batteries or a rechargeable battery pack with Sennheiser BA 2015 accupack charger (purchased from Sennheiser as an additional accessory). What might be the life expectancy of two AA batteries in a field shoot situation put some question in our minds and the fact that it's easy to mix up new and used AA's. You can't do the tongue test like you can with the 9-volt (yucky). There is always a guy in the crew who will put those electrodes to his taste buds–not us.

The EK100-G2 receiver has 9 channel banks with 4 channels per bank and will scan 1,440 frequencies to ensure you have the clearest transmission path available. The SK100-G2 transmitter easily adjusts input trim to optimize the sensitivity of the mic.

Spending three days shooting an infomercial for a music CD, we used the Sennheiser evolution wireless ew 112-p set and a much more touted mic system side by side. We captured audio from two on screen actors in a controlled studio setting and outside the studio in several unorthodox environments. Inserting brand new Duracell AA batteries into both receiver and transmitter, we shot for the full three days without changing batteries. We of course conserved battery power whenever possible, but not until the third day did we begin to see the low battery indicator come on the LCD.

Although the Sennheiser ME2 mic had different timbre than the Sony lav we were using along side it, it was by no means inferior, just had a slightly different sound. At a fraction of the cost of the Sony setup, the ew 112-p set performed as advertised. We shot footage of two people in a car listening to the CD into a Betacam. We also shot some of the car scene with a small consumer Mini DV camcorder to get more severe angles than the Beta could get into and a little rougher hand held feel as well. In all instances that we used the system, we found the ew 112-p provided a reliable and strong RF signal to each and every audio input.

We should mention at this point that the mini plug adapters in the ew 112-p set have a screw on sheath that holds the mini plugs tight so they cannot be inadvertently pulled out–nice feature.

The shoe adapter for the receiver is plastic, but a very useful tool nonetheless for mounting the EK100-G2 receiver onto most cameras.

Although, it would be nice if the folks at Sennheiser had a system for joining two receivers for upper end cameras with two audio channels.