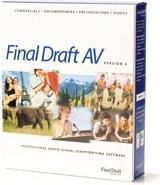 Your boss liked the video album you shot of his daughter's wedding so much that now he wants you to produce a marketing video for the company. He wants it in three weeks. It's got to look professional and he'll pay you the market rate. Congratulations, you've just turned pro. Oh no! You'll need a script, but you've never written one in your life — after all, you're a shooter, not a writer. Better get Final Draft AV Version 2.5, the professional audio-visual script processor for those who have the talent and vision to produce a top-notch piece of material, but lack practical experience in writing to accepted industry format.

Final Draft AV (Audio-Visual) Version 2.5 is a full-featured word processor specifically designed for dual-column, audio-visual scriptwriting. This program aids any writer in formatting and integrating all of the audio and video directions and elements into one seamless, all-purpose (yet customizable) script. Although primarily intended for the video producer, the package includes layout templates for radio writers, as well. And there is what's called a linear layout — a hybrid of the universally accepted screenplay format which combines all of the elements in a customizable, easy to read form across the entire page.

The dual-column, audio-visual script format is universally recognized by creative directors, writers, producers, directors, editors, photographers and talent to create television and radio advertisements, infomercials, documentaries, corporate videos, industrial films, presentations, speeches, etc. Final Draft AV's overriding strength is its ability to keep the two columns aligned (audio/video directions on the left, script on the right), regardless of what text or video directions are added, edited or deleted from their respective columns. When you add text or directions to one column, the matching paragraph in the opposite column automatically stays with it. There is never a need to retype, rearrange or repaginate manually.

Final Draft AV uses what it calls elements to describe and format various text types. You can now add these elements, such as video description, character, dialogue, parenthetical remarks, and others, with a single mouse click.

Another very welcome improvement over version 2.0 is the ability to easily rearrange video-text with different audio text and maintain alignment with other AV elements. This is something that's just about impossible to accomplish in any standard word processing program.

It's easy to switch the Audio Visual layout into the Radio format. With just one mouse click, a full-page one-column script appears, hiding the video instructions. Also, just as easily, you can switch the script to the Linear format, conveying all of the audio, video, dialogue and parenthetical information in a single, across the page display. Each format is fully customizable. The author may add or delete as much information as necessary. For example, the AV format might include camera directions or a shot list in the video column. This information can be carried on the script itself or broken out into a separate shot list.

Additionally, Final Draft AV 2.5 includes a customizable header and footer, a full-featured thesaurus and spellchecker, easy font and format changes, import and export capabilities with various other word processors and 100% cross-platform capability. Final Draft AV even allows the user to interface the text portion into standard teleprompting software packages. An on-line demo and tutorial (along with a downloadable version of the program) is available at www.finaldraft.com.

All of this is easy to learn and almost completely intuitive. Installation was a snap, glitch-free, and took less than ten minutes. The user manual is comprehensive and straightforward in a clean and easy to read format.

Amateur screenwriters quickly learn that no Hollywood producer or director will even read a screenplay that is not submitted in proper format. The slightest deviation from the industry accepted style will get that script tossed in the trash bin — un-read, un-loved, and un-produced. The same applies to professional advertising or video presentations.

Very useful for the experienced shooter/inexperienced writer who wishes to take both aspects of his craft to the next level.