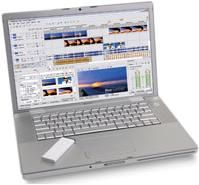 Two Platforms in One


Apple has had various versions of Mac OS running on many different platforms. The first Macs (circa 1984) ran Motorola 680×0 processors. Ten years later, the hardware began to migrate to IBM and Motorola's PowerPC platform. Then, in 2001, the software began to migrate to Mac OS X, the BSD Unix-based operating system. Now, we’re seeing another hardware shift to Intel processors. The MacBook Pro is one of the first Intel-based Macs (along with an Intel-based version of the iMac and the Mac mini, and the more-recently announced 13″ MacBook and 17″ MacBook Pro). What does this all mean to the average Mac user or potential future switcher?

Out of the box, you’ll notice the great packaging Apple uses. It's a simple collection of parts, really: the computer itself, a charger with a flip-out prongs (a standard power cable is also included as well), a DVI-to-VGA adapter cable, and an Apple Remote for use with Apple’s included Front Row software. A box including a manual, restore DVDs, license agreements and warranty statements is nestled in the foam underneath the computer.

We attached the charger to the computer with a quick snap of the MagSafe connector (magnetic DC port). The battery includes an indicator to show how much charge you have left, which begins blinking to show that it is taking a charge as soon as you attach the power connector.

Upon booting the machine, the startup chime sounded quite good over the speakers. The machine booted very fast–from pressing the power button to getting the Finder, we waited only half a minute.

The display looks great–it’s definitely one of the things that endeared us to the machine. Like the PowerBooks that preceded them, you can optionally change the MacBook Pro’s display backlighting to either brighter or dimmer based on ambient lighting. (This backlighting is also tied to the backlighting of the keyboard.)


The way Apple chose to migrate its user base to the Intel platform is similar to the way it migrated everyone to PowerPC, except this time around, they’re called Universal Binaries instead of Fat Binaries. But they are on the heavy side: for example, the Universal Binary version of the open-source Firefox Web browser (1.5.0.3) is 46MB; Firefox for PowerPC is 28MB. Some Mac enthusiast sites have instructions that show you how to strip out the unnecessary code for the platform you’re not using, but we wouldn’t recommend doing this. There are numerous automatic updater utilities (such as Apple’s own Software Update tool) that will patch certain applications, but if there’s a component of an application that an updater can’t find, the results may be unpredictable. Our contact at Apple notes that the binary portion of an application is generally the smallest part of the application bundle, and he confirms that the potential problems associated with stripped apps are generally not worth it. The best solution for the moment is to just get a model with a big hard drive (or, just use an external FireWire hard drive for your data files.)

Apple includes Rosetta for running non-Universal, PowerPC Mac OS X programs. Rosetta is a translation tool fairly well hidden from the end user. Our experience with a few PowerPC applications is that they seem to perform pretty well, but Rosetta has its limitations. For one, if you want to use any Classic applications, whether compiled for 68k or PowerPC, it’s not going to happen. We’re half-expecting that before long, some third-party emulation utility written for the Intel Macs will come along that will let you run your old Classic apps, but for now, you can only run OS X applications. Other apps you won’t be able to run with Rosetta include PowerPC screensavers, anything that creates preferences in the System Preferences window, apps that require a G5 and apps that require PowerPC kernel extensions. A number of issues with Java come up too; however, if the only place you use Java is with the Web, then using a modern Web browser (e.g. current versions of Safari, Opera and Firefox) will prevent problems from coming up in the first place.


The announcement of Boot Camp, a public beta application that lets you install Windows on your Mac, created much excitement. There are a few little wrinkles to it, though. First off, it’s a time-limited demo, so at some point it’s possible you won’t be able to switch between operating systems by holding down the option key during startup. We presume Apple’s ultimate goal is to get you to upgrade to Mac OS X 10.5 once they release it.

The Boot Camp process is rather elegant: the 83MB download creates a driver CD, then creates a partition for installing Windows onto. You then insert a copy of Windows XP Home or Professional (SP2 only — not included), create a partition, and install Windows. After Windows is set up, you install the drivers from the disc to make Windows operate with your machine’s specific features (graphics, networking, audio, Wi-Fi, Bluetooth, the eject key and display brightness controls.)

Once you start using Windows, there are a few oddities: there is no right button on the touchpad (however, this doesn’t really matter within Mac OS, since you can control-click to get to context menus.) You also can’t use the Ctrl-Alt-Del key combination unless you attach an external keyboard (the Mac’s “Delete” key is “Backspace” in Windows-land.)

As far as filesystems go, Windows XP is incompatible with the Mac’s Journaled HFS+, however, products like MediaFour’s MacDrive will give you read/write access to any HFS+ volume. Also, Mac OS X can only read (and not write to) NTFS volumes. The common ground is FAT32, which both Mac OS and Windows can read and write, but the limitations of FAT32 (e.g. the 2GB file size restriction) make that filesystem not worth considering for most video work.

On to the Apps

We decided to take an editing project that we started on the Dual 2.7GHz, 4GB RAM PowerPC G5 and edit it in Final Cut Pro 5.1 and Garage Band 3.0.2 on the MacBook Pro. Granted, our Power Mac probably needs a good cleaning due to extensive use, but the MacBook seemed to easily keep up, maybe even surpass it in some cases. Not something we expected when comparing a laptop to a top of the line tower. From start up, to loading FCP, to hardly ever needing to render and when it did, the rendering speed was impressive. Even loading thousands of JamPack loops seemed to fly by. We used to use this rendering and loading time to make and eat lunch but we went hungry this weekend as we hardly ever had downtime to leave the notebook computer.

The first crop of Intel-based Macs are very well-implemented and versatile machines that virtually obliterate the platform barrier between Windows and Mac OS X. We’re looking forward to seeing what the future brings, but this machine is so well implemented, that we’re sure Apple will gain a new wave of switchers with its own switch to Intel.

The first portable computer that does a great job running any current video-related application worth running.