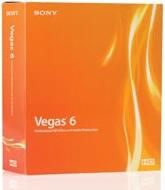 Vegas 6 is a High Roller

Vegas has had a serious cult following through its many incarnations, starting as a Sonic Foundry product back in 1999. When Sony bought Sonic Foundry in 2003 (when Vegas was in version 4), the fans shuddered at what might happen to their favorite editing software. But as Sony brought it through two new versions, dedicated users and new converts alike breathed a sigh of relief to see that their powerful, tried and true editor only changed for the better; much better.

Vegas 6 is unique in that it has a relatively easy learning curve, but possesses a powerhouse of deep features suitable for the seasoned editor. There are few programs, if any, that can boast suitability for beginner through experienced user under one roof. One side note though–despite being easy for beginners to learn, it was difficult for our Avid-based users (who were used to various versions of Avid, as well as Final Cut Pro and Premiere Pro) to adjust to the different workflow. For those wanting to “work in Hollywood,” learning on a non-Avid based system may be a hindrance. That said, let’s jump into the wide world of Vegas 6.

We loaded the single application disc and accompanying Sony Pictures Sound Effects Series disc without a problem on our HP xw9300 Workstation, with dual AMD Opteron 250 (2.4GHz) processors running Windows XP Professional. Anxious to jump right in, we forgot to download patches, which lead to immediate frustration. With the patches downloaded, we were up and running, and fast.

And we do mean fast; a noticeable increase in speed. Sony claims 40% quicker, and we believe them. With the real-time effects and transitions and much faster render times, Vegas joins the big kids in workflow efficiency. Sony claims to have improved the code in Vegas in order to take advantage of dual processors and hyperthreading, and our experience confirms this. If you have a number of machines networked together, you can take advantage of Network Rendering, where the computers distribute the work and compile the finished project back to your main editing machine.

Another new feature that excited us post people was the Media Management tool. The main feature is the ability to attach metadata to individual clips for organizing and searching. Many editing programs have some sort of labeling system but none that we have used come close to Vegas’ system of tags. The information has to be entered by the editor (or editor’s assistant, if you are so lucky), but on longer projects, this could be a savior. Once each clip contains its many tags, it can be easily searched with the click of a button. Competitors, take note.

How have we gotten this far without mentioning HDV? If you are one of the pioneers of this cutting edge technology, Vegas 6 is there for you. This new high definition video format has the same data rate as regular DV, so capturing from your camera or deck is the same. The difference occurs just before editing as HDV utilizes the highly compressed long GOP (Group Of Pictures) MPEG-2 transport stream. It is not possible to cut at the beginning or end of each frame as it may share information with another frame. Different editing software packages handle this challenge in different ways. Vegas uses the CineForm codec which means there will be rendering time. Though Vegas does not edit native HDV, once the transcoding is complete, you’ll be back in the realm of frame accurate editing with real-time effects just like it was DV. Factor in time for rendering on the tail end, as well as for exporting back to HDV. Rumor has it that Vegas 6 can even edit HDV 24p, something very few, if any, other editing software packages will do. Unfortunately, at the time this article closed, we didn’t have a 24p HDV camera to test this.

Vegas has far more features than we can discuss in this review; more than we could fit in a single issue of this magazine, for that matter. A quick list of some of the higher-end features includes: nesting (entire projects can be imported into a new project as a single rendered clip), A/V sync repair, playhead scrubbing (dragging the playhead or time line indicator over a clip to see and hear media faster than real-time), Dolby 5.1 surround sound capabilities, powerful color correction tools, vectorscope, waveform monitor, JKL keys (rewind, stop and fast-forward keys respectively) and more.

Visit the Web site for a 30-day free trial version, a side by side comparison with the lighter and cheaper Vegas Movie Studio+DVD ($90), a glossary, User’s Guide downloads and more.

Number of Video Filters: over 190

There may not be an easier to learn, though big enough to grow into, editing program at such a reasonable price.