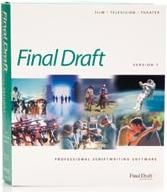 The King of Drafts

Are formatting headaches forever gone? Professional scriptwriters and aspiring writers have one of the best tools available at their fingertips with Final Draft 7. The ability to open the program and immediately start writing your script in industry standard formats is Final Draft's bread and butter.

This version of Final Draft is cross-platform compatible. There is just one disc for Windows and Macintosh users alike. It's also bundled with an additional program called Tagger, which can export your script for acceptance with other scheduling software.

Final Draft in its simplest form is a word processor with all the expected built in features, like spell check and a thesaurus. It also has an online script registry, popular script templates, and possesses a strong collaborative option. From beginning to end, Final Draft 7 has a healthy amount of features to help make writing a joy.

After a quick and easy installation on our Compaq (running Microsoft Windows XP), the review was under way. We can confirm reports that the original release of version 7 has many bugs. Make sure you go to the Final Draft Website and get the latest updates and patches after your initial install.

Traditional script formats can be tricky for beginners and even a hassle for the pros. Final Draft takes many of these troubles away. Getting into the flow of writing is easier than ever. The software assists formatting by predicting the next line of content. When you hit enter twice to break to a new line it gives you options for a variety of typical script elements: Dialogue, Action, Scene Heading, Character, Transition, and more. Each element is also shortcut keyed and is customizable. Changing from uniquely formatted elements is a snap and allows you to focus on the content, rather than setting the next margin for the element.

Another feature that speeds up repetitiveness of scriptwriting is the SmartType tool. SmartType will learn the names of your character and other common script jargon so it can predict your next word. In addition, Final Draft makes a library of character names as you go along your script. It's just another time saving tool when you want to create character reports.

If you really find yourself in a bind with your flow, you can access the Ask the Expert feature. It includes hints from professionals that can get your creative direction back on track. There are samples of writing for many different types of documents, too. If you ever wanted to write for Buffy the Vampire Slayer, Ask the Expert will show you how to write a good logline, leavebehind and outline. You can even find the script template that Buffy writers use for the show.

The software comes with over 50 script templates for popular British and American TV shows, movies and multiple types of screenplays. It's an easy way to get you up and running on the appropriate format for your script. However, we caution beginners regarding this feature, not to assume it will educate you on the art of scriptwriting.

Templates are great guides, but to make the best of scripts you should be knowledgeable in the area. If you are a beginner, consider buying a book or two about scriptwriting or take a class in order to learn the appropriate use of common script elements. What benefit is it to have all this formatting power, but not know how to use it in the best way?

Tools for Every Phase

If you have a script written in another application, Final Draft can help import that document. To put it to the test we found an old 60-minute TV Drama script created in Microsoft Word.

Final Draft couldn't recognize a Microsoft Word document (.DOC), so saving it as a text only document is key to changing over your script. Final Draft has the option to open Rich Text Format (.RTF) files as well. Opening our rather lengthy 60-minute script in Rich Text Format crashed the computer. However, smaller files seemed to work.

Importing a text only document is a breeze. As you import, Final Draft builds your character name library and makes adjustments in order to make the transition as seamless as possible. Don't expect this software to preserve the original formatting or make your script look suddenly more professional. The ability to access Final Draft's helpful tools is the real advantage to transferring your scripts from another application.

Final Draft makes scriptwriting a collaborative effort. Users can write, edit and converse with each other online. This is a great way to get live feedback from other scriptwriters. The ScriptNotes feature is a big help for making improvements to your story, too. This feature allows you to leave notes in the script that won't congest the page.
When the time comes to show your work, you can save it in a variety of formats to view electronically. In addition to its native file format, you can save it as Text Only (.TXT), Adobe Acrobat (PDF) and good ol' HTML. This will help make your script more accessible in other applications, over e-mail or a post to your Website.

For professional scriptwriters, Final Draft offers all the necessities you can expect and the conveniences you need to stay focused on content. The only drawbacks are the few bugs we encountered along the way. Overall, it's an excellent product that should be in your toolkit if you want to approach the entertainment industry with your story.