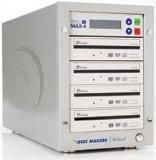 Here at Videomaker, we have been burning CDs and DVDs since the early days. Way back then the burn rate was slow and the failure rate high. Thankfully those days are over and with competent devices like the ReflexMax4 from Disc Makers, we can go back to being disgruntled with the photocopier and fax machine.

The ReflexMax comes in three sizes- the one- (which has two trays but the top one is just a reader), the four- and the seven-tray. We tested the four-tray.

This sleek, silver 10" by 7" by 16" long mini-tower weighs just less than 25 pounds. We pulled it from the box, plugged it in, took out the laminated Quick Start Guide (one-sheet back and front) and started burning. It couldn't have been much easier.

The DVD we used as a master contained three short videos and a slide show with a simple menu made in Apple's iDVD5. All the data totaled 430MB.

The Quick Start Guide clearly states each direction to the minutest detail. For example, instead of saying, "turn the unit on," it reads, "Power on the ReflexMax by pressing the round button at the bottom right on the front of the unit." We appreciate this attention to detail.

After we powered the unit on and ran its 15-second self-test, we were instructed to scroll through the menu using the Up and Down arrow buttons to find "9. Image." The action was simple enough but we found reading cryptic messages on the small LCD menu for the entire process to be not particularly intuitive. Without the Quick Start Guide or the 13-page PDF that comes on CD or can be found at Disc Makers' Web site, we would be lost. We suggest you tape the laminated Quick Start Guide to the table where you keep the burner.

Having found the proper setting we placed our master DVD in the top tray and pressed Enter. The internal fans came on and a three-part countdown began. This, we thought, was the coolest part of the process: the LCD counts down the minutes remaining, the MB being copied and the percent of duplication completed.

It took one minute, five seconds to transfer the 430MB to the internal hard drive. The unit beeped and read, "image load OK," to indicate it was ready to burn, so we removed the master.

Before we could begin burning we had to follow yet another set of obscure directions that required us to press the Escape button two times then the Up-arrow until the LCD read, "1. Copy." We were now ready to burn.

We loaded each of the four Plextor PX-716A drives with blank DVD media, closed the drives and pressed Enter (any amount of media up to four at a time can be burned per session).

The countdowns began. The tiny green lights on the front of the burners blinked orange to indicate that they were hard at work and less than two minutes later a beep announced that the four discs were finished. Each of the trays opened automatically indicating that the burns were successful. According to the Quick Guide, if they did not burn successfully, the tray would not open and the LCD would read, "FAILED."

We repeated the process six times to burn all 24 DVDs we needed for our run without a failure.

The ReflexMax units can also burn source-to-disc. The top tray holds the source CD/DVD for copying. We tested this feature with the same master DVD and the process quickly completed without a problem.

With an additional cable and software (PC $99, Mac $139), the ReflexMax can also burn directly from a computer.

Disc Makers boasts free lifetime tech support for the ReflexMax. We gave them a call, expecting to sit through a couple unbearable Muzak ripoff versions of 1960's oldies music, but were pleasantly surprised when we made human contact in 34 seconds flat.

One consideration when duplicating large numbers of discs is how you will change the media. If you need to duplicate 200 pieces, that's 50 times you will need to unload the burned media and re-load the blank discs. If you are doing runs of more than 200 pieces you might want to consider an automated robotic duplicator that can hold upwards of 200 discs for a single run.

Another detail to keep in mind is the ReflexMax series won't print graphics on the media. Disc Makers (and other manufactures) sell home/office duplicators that do.

Aside from the non-intuitive menus, we could not imagine the duplicating process being any easier and we were truly surprised with the speed of the burns. If you are looking for a machine to duplicate runs between, say, five and 200 DVDs or CDs, and you're not concerned with printing graphics on the media, this unit would be perfect. Plus it just came down in price by 25% to $990.