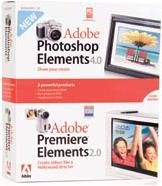 Adobe’s Premiere Elements 2.0 is far from simple. This robust, inexpensive “entry level” editing program is suitable not only for the non-technophobe beginning editor, but should keep the intermediate cutter content as well. Adobe brought together a decade and a half of editing software development experience and consumer feedback to create a PC offering that you may have trouble growing out of. Let’s take a look.

We loaded the program from the single DVD, registered the software and began our capture of video all within ten minutes. The heavy stock four-page quick-start guide was all we needed to commence the simple process of getting MPEG-4 video from our point-and-shoot still camera into our HP xw9300 (AMD Opteron 2.4GHz with 2GB RAM, Windows XP Professional). We applied some filters, made a few frame-accurate cuts and outputted a small enough file to email to someone's cell phone without ever cracking the 244-page user’s guide. Not bad.

Getting Up and Started


Granted, we editors have some experience with the Premiere line of products. Some users claim the interface, which more closely resembles the Premiere Pro line (as well as other advanced programs such as Avid and Final Cut Pro) is more challenging than its entry level post production peers.

For the majority of us in the Videomaker community, control takes priority over automation in our post-production storytelling process. There are beginner’s programs that claim to edit the entire project automatically, but most of us want to be making the artistic decisions. For this reason, a small learning curve in exchange for a quality, robust program is well worth the time and effort it may take to become fluent with this software.

To help those starting from scratch, there are tutorials on Adobe’s Web site, in the user’s guide and at various third-party web locations such as www.about.com and www.atomiclearning.com, to name a few. Books from Peachpit Press and Wiley Publishing (The ‘For Dummies’ series), among others, are also valuable learning tools.


One of the most exciting new features in this program is the ability to capture video and audio from many of the new devices currently flooding the market such as MPEG-4 camcorders, cell phone cameras, DVD camcorders, and video from point-and-shoot still cameras. Capturing and editing video from these MPEG-based devices has been difficult in the past, but we had no trouble importing, editing and exporting audio and video.

Another powerful addition with the new version of Premiere Elements is the editable DVD and titling templates. Premiere Elements 2.0 comes with dozens of DVD menu templates, some with motion backgrounds and audio. Many of the templates come in themes such as Happy Birthday, New Baby, Travel and Wedding. The titler comes with templates as well, also themed with some that match the DVD menus for continuity. These titles are customizable as well.

Effects and transitions have thumbnail examples of what they do, taking some of the guesswork out of learning these tools. Most give a fair amount of control to which degree they alter the media.

Sound editing is fairly rudimentary. Thankfully, there are audio meters as well as rubber banding on the timeline, but Premiere Elements 2.0 lacks a dedicated audio editing interface.


A powerful interface design decision was to move away from free-floating windows and tool palettes in exchange for interlocking panels. This eliminates overlapping windows by having adjacent panels enlarge to fill empty space or decrease in size depending on how the user changes its neighboring panel. We immediately became comfortable with this new interface dynamic, wondering why this idea took so long to come to fruition. Individual panels can have their own real estate or be joined with other palettes in a tab-like fashion.

When it comes to outputting, Premiere Elements 2.0 keeps up with current trends, allowing an editor to burn dual-layer as well as single-layer DVDs, encode for hand held devices and cell phones as well as output for email, the web and VHS. Premiere Elements 2.0 can even burn PAL DVDs, though we have to take their word on this as we do not own PAL playback equipment. In addition, the program will automatically encode DVDs at the highest possible quality depending on the length of the work; a very nice tweak not found in other entry-level authoring programs.


The folks at Adobe have just raised the bar for entry level editing software. For less than $100, beginning editors can have a program with a relatively low learning curve, but with enough functionality to keep them cutting well through their ascent into the intermediate ranks.

Number of Video Filters: over 300