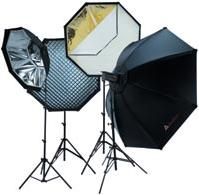 So Soft, What Light…

If there is one friend that the video professional or avid enthusiast should not come to the party without, it's a good soft light source. Nothing helps out a difficult available light situation or smoothes a subject's rough edges like a softbox.

The 3′ Octodome Softbox kit from Photoflex would add to a professional production setup and would most likely be one of the first instruments you reach for in the studio or in the field.

Out Of The Box

One of the heat sink fins of the Starlite QL light head slips into the Tilt Swivel Mount and is one of the nicer features in the Photoflex family of products. The Starlite Octoconnector (speed ring) accepts the steel support rods of the softbox dome itself while locking to the Starlite QL light head with a twist and secured with a spring loaded quick release. Packed in its own nylon packet, the lined dome has a heat-resistant, highly-reflective silver surface. An inner baffle diffuses the surprisingly even light from the dome and eliminates perceived hot spots, and is supplemented by an additional layer of diffusion that is added to complete the soft radiance. An egg crate grid is also present in the kit in a separate nylon bag and controls spill well when added to the setup. The 2214 light stand reaches a steady 8’2″ and comes with casters for easy movement and positioning.

We used 3′ Octodome Softbox kit on a field shoot for a spa manufacturer inside the cramped quarters of a gazebo, with a model in a full sized spa. Right away, the relatively narrow depth of the 3′ Octodome Softbox was welcome. Most softbox configurations would not have squeezed into the situation–the Photoflex Octodome not only fit, but also was easy to adjust swivel and rotate to gain the desired angle and mood.

Many standard rectangular softboxes are a bit of a challenge to assemble into the speed ring, but the 3′ Octodome Softbox's narrow profile also achieves its shape without a lot of stress on the steel rods. Also with deep softboxes, there is a lot of tension and balance stress on the stands and mounts requiring vigorous tightening of mounts to prevent slipping and sandbags to keep the setup from toppling over. The Octodome's minimum depth keeps the balance issue well within the ability of the wide base 2214 stand and makes for effortless adjustment of the Tilt Swivel Mount.

With a moderately expensive one-light kit ($615) like the Photoflex 3′ Octodome Softbox, the 2214 stand accompanying it was nothing special. Although stable to its apex of 8’2″ by way of a very wide base, the 2214 is for all intents and purposes is just another light stand. The casters and mounts that fit onto the 2214 legs are a bit awkward in design and fell off a time or two until we figured them out. The 2214 seems to be better suited for use in the studio than as a field stand.

The Photoflex touting of its omnidirectional lamp and how well-adapted it is to the softbox environment is well founded. The lamp produces an even light with a minimal spill as long as the rear flaps are closed. However, when things heat up and the flaps must open, the spill is right there with the likes of cheaper configurations that mount an instrument on the back of the ring. Plus, these cheaper units serve multiple purposes outside of the softbox realm, unlike the Octodome Softbox kit.

Nice Little Set Up (but I’m running out of pockets)

Photoflex has produced quite the unique product line in its Octodome Softbox and it would be well used by virtue of its beautifully even and controllable soft light. The Starlite lamps are advertised as having a "shatter resistant Pyrex ® outer shell allowing cooled handling of the halogen lamp without danger of contamination by hands but none the less come with no carrying case or protective covering. The kit, while having bags for the dome and its accessories has none for itself (without an additional purchase). At $615 the carrying case seems like it should be included.

Number of Lights in Kit: 1

Great softbox but as a pricey kit lacks flexibility.

Bruce Coykendall is a commercial and television producer.