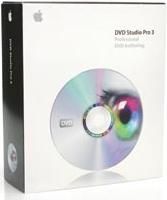 In the Apple world, DVD Studio Pro has long been known for its comprehensive and well-designed approach to DVD authoring. The latest version, DVD Studio Pro 3, adds an enhanced set of tools for menu transitions, a greatly enhanced GUI and DTS 5.1 encoding support, all with the same sleek look and brilliant Apple styling that fans of past DVD Studio Pro have come to appreciate. Though we did find a few things to gripe about in the software–not the least of which was the fact that the simulator did not show productions exactly as they will appear on the final DVD–overall DVD Studio Pro 3 performed admirably–beautifully, even.

Apple Attitude
Apple has definitely come into a Zen state with interface design. The initial look of DVD Studio Pro 3 is similar to Apple’s other lines of professional and consumer based video solutions. New to this version’s UI is the “flowchart” styling of the Graphical view. DVD authors love this view because with a quick glance, they can see what the final user experience is going to be.

DVD Studio Pro 3 also comes with two essential external packages that round out the software’s function nicely: Compressor (a truly professional compression tool with a wide range of options), and A-Pack (a tool for mixing audio into any configuration desired — including Dolby Digital and, now, DTS 5.1 surround).

In version 3, Apple has also implemented a system for creating instead of in a separate window. This is a great workflow feature that other DVD authoring software packages we’ve seen have attempted to incorporate, but we’ve never seen it done as successfully as DVD Studio Pro 3 has.

Now, all you hardcore pros out there will love the Connections Editor. We all know that if you are going to use the same media twice on a disc, this eats up space faster than rabbits can multiply. However, most professional-grade authoring packages let you edit your connections so that multiple assets can access the same targets. DVD Studio Pro 3 allows this in a very intuitive interface where a simple spreadsheet view lets you see asset and target without having to select every button on the screen to see where it goes.

Using the “create a new story” feature in conjunction with the connections manager can yield infinite possibilities. Imagine creating a “choose your own adventure” DVD! Granted, this can be done with other packages; but the intuitive and easy-to-use interface of DVD Studio Pro 3 makes it go much faster (and easier).

As with version 2, DVD Studio Pro 3 includes a number of very stylish, professional-looking templates you can either use as-is or as leaping-off points for learning the interface and creating your own menus.

Not for the Timid
First, this product is not for the amateur DVD author. Although this software has a basic mode that greatly resembles iDVD, its price shows that it’s clearly not intended for the beginner or hobbyist.

On that note, the interface (although very cool) has too much animation associated with it. If your computer is on the lower end of the system requirements field, as ours was, you’ll notice that it gets a bit glitchy at times (especially while encoding in the background), which can be rather irritating.

Perhaps one of the worst problems with the software is the fact that its preview simulator doesn’t always give you an exact view of the final DVD. Also, the simulator is not capable of playing back the DTS 5.1 audio that the software designers have been wise enough to include. Why this is, we can’t imagine, and we hope Apple will provide a patch for this soon.

Taken as a whole, however, DVD Studio Pro is a wonderful product, one that’s very hard to beat at its price point in the DVD Authoring software world. We only wish Apple would port this excellent product to the PC world, so that a much wider audience could have access to it.